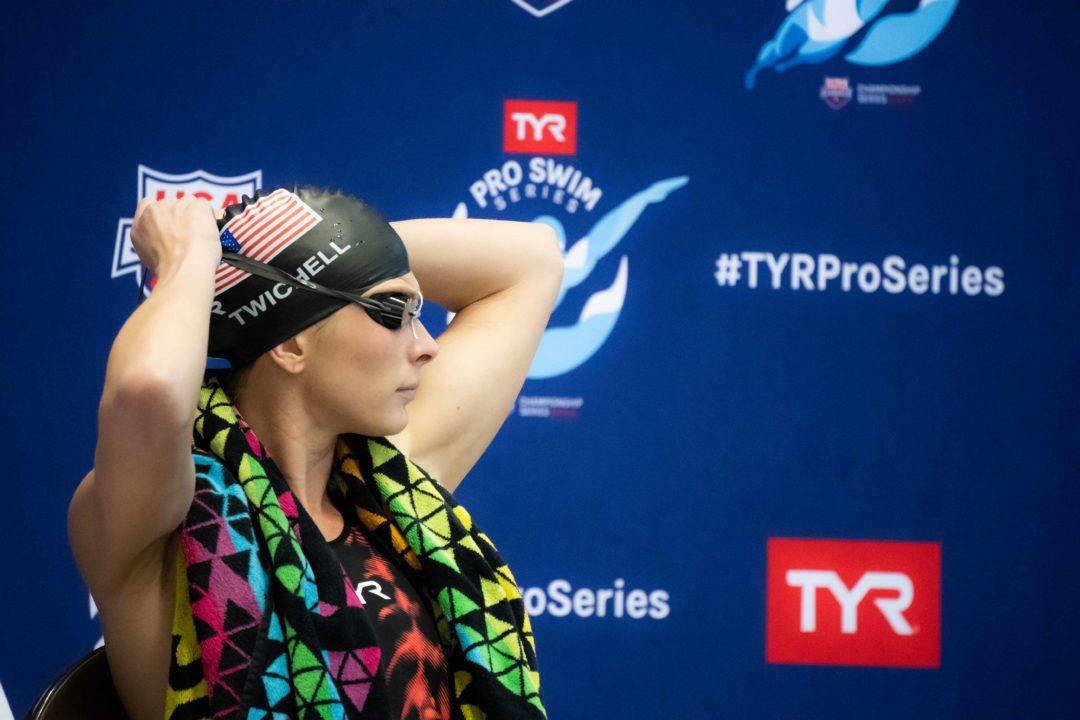 Ashley Twichell, an Olympian and open water specialist, is the top seed in tonight's 800 free on the women's side. Archive photo via Mike Lewis/Ola Vista Photography

Tonight, the Pro Swim Series is finally back, kicking off the 2021 slate with simultaneous meets in Richmond, Va., and San Antonio, Texas.

The 800 free is up tonight on the men’s and women’s sides, with TAC Titans’ Ashley Twichell the top seed on the women’s side and Dylan Porges, a Princeton swimmer training with the TAC Titans as the Ivy League is redshirting this NCAA season, the top men’s seed. Standout teens Cavan Gormsen (Long Island Aquatic Club) and Claire Weinstein (Westchester Aquatic Club) are two other big names to watch tonight. Gormsen is 15 and Weinstein is just 13; Weinstein will go for her first Olympic Trials cut, which would make her the youngest OT qualifier in the country.

TAC Titans led the 1-2 sweep tonight in the women’s 800, led by veteran Ashley Twichell at 8:35.16. UVA ’25 commit Caroline Pennington, who has been training with the TAC Titans since the beginning of the pandemic, hit a lifetime best 8:40.50 to take second, dropping almost four seconds from her old best.

NCAP’s Paige McKenna (Wisconsin ’25) and Long Island Aquatic Club’s Cavan Gormsen followed up in third and fourth at 8:43.57 and 8:43.87, respectively. For the 15-year-old Gormsen, that’s a lifetime best by over seven seconds, and her first Olympic Trials cut in this event.

13-year-old Claire Weinstein of Westchester Aquatic Club was fifth in 8:45.34, dropping over 21 seconds. A big drop was expected after she dropped 20 seconds in the 1000 yard free recently, going 9:43.75. That makes Weinstein the youngest Olympic Trials qualifier, as she clears the standard by over two seconds.

Parent clocked an 8:08.95, getting well under the OT standard for his first-ever OT cut.

I live around the corner ….. are they letting fans in?

Josh gets the cut! Trials!

Claire Weinstein with the Olympic cut at 13 yrs old

Since we don’t have another Klete Keller story today I guess I read these comments. 🙂

No livestream currently for Richmond

Are you saying that there won’t be one tonight? Or saying you can’t find it? And if the former, how do you know this?

im sorry. i was saying i cannot currently get the live stream to work. i dont know if they intended or intend to have one

also, the session ends in 13 minutes, so it appears they will not be streaming anything

Is anyone finding the feed? Link?

As usual USAS livestream is balky. They are just so bad.

Nothing working for me

Yep. I get to the page that says “Now Streaming. Tyr Pro Series…blah blah” but no video and no link.

It’s not even playing for me

Nothing posted on USAS site yet, but it does say video on-demand…