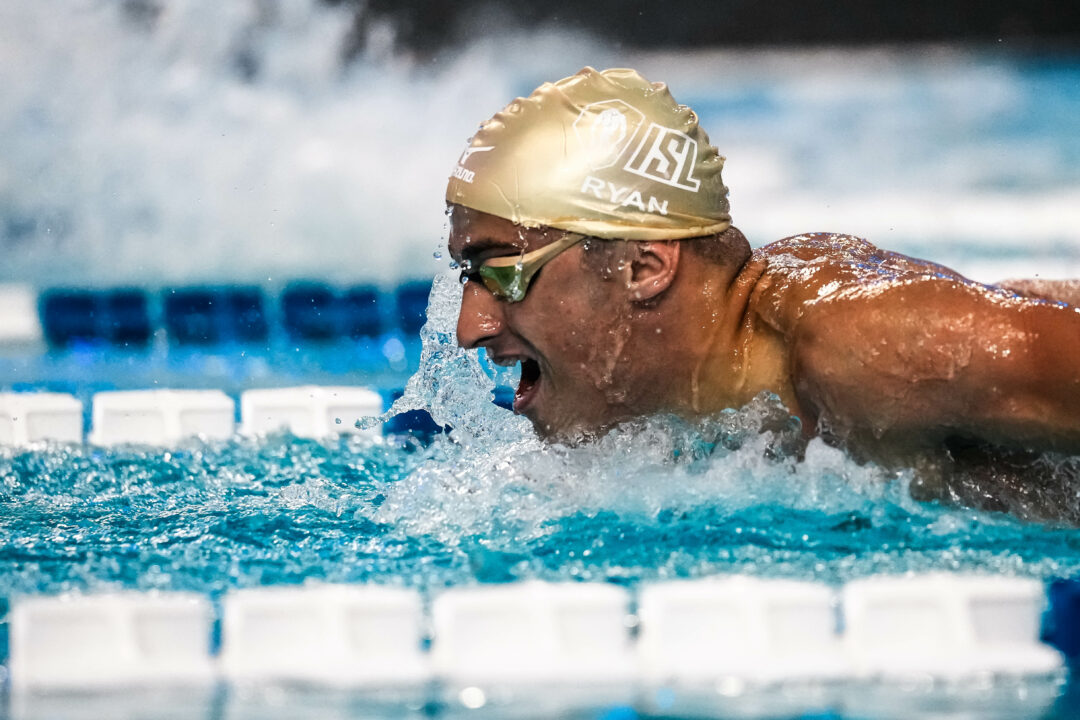 #1 Energy Standard faces #4 Toronto Titans, #6 the Aqua Centurions, and #7 the DC Trident. This is a crucial match for Toronto--perhaps their most important. Current photo via Mike Lewis/Ola Vista Photography

If you’re cheering for the Toronto Titans to make the 2021 ISL League Final, this match should have you on pins and needles.

Throughout the regular season, the fourth spot in the Season 3 Final seemed as though it was up for grabs between the LA Current and the Toronto Titans. The Titans opened the season strong, only losing by 5 points to Energy Standard in the first match in Naples. Throughout the regular season, the Titans appeared to have a legitimate shot to bump LA from the top-4 and sneak into the Final. However, following a 3rd-place finish last week, which also led to a 1st-place finish by LA, Toronto’s chances of making the final are slipping away.

The Titan’s roster is arguably the deepest as it also includes Louise Hansson, Laura Stephens, and Michelle Coleman on the women’s side. Energy Standard, however, counters with Sarah Sjostrom and Maddie Banic, though they’re best at the 50 and 100, leaving Energy wanting in the women’s 200 fly. The Aqua Centurions bring in Silvia di Pietro, Laura Taylor, and Elena di Liddo on the women’s side, providing pretty solid coverage of all three fly races. Similarly on the men’s side, Aqua brings in sprinters Szebasztian Szabo and Matteo Rivolta to take on the 50 and 100, as well as Leonardo de Deus to tackle the 200. Zach Harting and Camden Murphy are DC’s best hope for any substantial points in men’s butterfly, while Linnea Mack, Klaudia Nazieblo, and Szuszanna Jakabos will have their work cut out for them in the women’s fly events.

Energy Standard should dominate the men’s backstrokes between Evgen Rylov, Kliment Kolesnikov, and Travis Mahoney. Their women’s crew of Mary-Sophie Harvey, Viktoriya Gunes, and Anastasiya Shkurdai is also quite strong, but none of these women come close to being a ‘clear favorite’ to win any of the three backstroke events on offer at this meet. Rather, we might expect to see Toronto’s Kylie Masse and Lisa Bratton leading the charge in the women’s backstrokes, possibly with Michelle Coleman or Hansson stepping in for Bratton on the 50.

Shane Ryan and Max Litchfield will have some heavy lifting to do if Cole Pratt remains absent, though it’s worth noting that Ryan is Toronto’s best male backstroker anyways, and a major threat in the 50 and 100. The Aqua Centurions are perhaps the weakest team in backstroke this weekend, with their only real hopes of a victory coming in either the men’s 50 or 100 by way of Thomas Ceccon. Similarly, the DC Trident will struggle on the men’s side, though the women, led by Ali DeLoof, should fare decently.

Once again, Energy Standard is the team to beat in both men’s and women’s breaststroke. Ilya Shymanovich‘s dominance in the 50, 100, and 200 breaststrokes cannot be overstated, so we won’t dwell on it–Charlie Swanson and Felipe Lima are great assets to have as well. Evgenia Chikunova and Benedetta Pilato are dominant forces on the women’s side as well, though Pilato has not been on top of her game this ISL season. The Aqua Centurions hit back hard in men’s breaststroke with Nicolo Martinenghi, Arno Kamminga, and Fabio Scozzoli. Martinenghi, in particular, is having a great year, while #1 draft pick Kamminga has been up and down in the short course pool.

The DC Trident will have Cody Miller and Felipe Franca Silva on the men’s side, a solid duo though not impervious to a jackpot by Shymanovich. Maria Temnikova and Tatiana Belonogoff will need to be on top of their game to score any meaningful points in women’s breaststroke though. The Toronto Titans bring in Fabian Schwingenschlogl and Anton McKee, the former currently having a great season and the latter not producing the head-turning results he did in season 2. Toronto’s female breaststroke squad, consisting of Kelsey Wog, Dominika Sztandera, and Tess Cieplucha has also produced mixed results this season, making breaststroke perhaps Toronto’s weakest discipline overall.

The freestyle, once again, will be all about Energy Standard, who is likely to dominate the sprints on both men’s and women’s sides Consider: Sjostrom, Haughey, Ben Proud, and Kregor Zirk, to name a few. The Aqua Centurions hit back pretty well, particularly in the men’s sprints, thanks to Ceccon, Miressi, Stefano Ballo, and Matteo Ciampi.

The DC Trident is projected to perform pretty solidly in both sprint and middle-distance, particularly on the women’s side, thanks to Anna Hopkin, Linnea Mack, and Leah Neale. Meanwhile, Toronto’s female freestylers look strong but its men’s roster is rather thin. Count on Coleman, Hansson, Kasia Wasick, and Summer McIntosh to bring in the lion’s share of Toronto’s freestyle points, though Luc Kroon is a good bet for solid points in the middle-distance events as well.

Energy Standard is not expected to dominate the IMs, rather, we might see Toronto’s Alberto Razzetti, Summer McIntosh, and Tess Cieplucha leading the way in the 400 IM while Kayla Sanchez and Louise Hansson take on the 100. Energy Standard does, however, have Mary-Sophie Harvey and Viktoriya Gunes, each of whom poses a significant threat in the IMs, though Energy is weak on the men’s side. The DC Trident has Andreas Vazaios and Bailey Andison, each of whom has been a huge asset this season and could haul in major points, possibly even a couple of wins. The Aqua Centurions will have Ilya Borodin leading the way on the men’s side, though their women’s IM roster will need to step up to put any meaningful points on the board.

Finally, the relays require the littlest conjecture of all. Energy Standard is the favorite to win all of the relays this weekend, therefore also earning the privilege of choosing the stroke for the skins (after two of the four options have been eliminated, that is).

Three of these teams qualified automatically for the playoffs–the DC Trident, however, qualified by way of winning the play-in match, Match 11, in Naples. Though DC has been much better in season 3 than in previous seasons, it would be an upset for them to beat either the Aqua Centurions or the Toronto Titans in Eindhoven. The Titans, meanwhile, are reeling from the losses of key players including Blake Pieroni and Finlay Knox, who are out for the entire playoffs, as well as others who missed competing in whole or in part last weekend, such as Cole Pratt and Jay Lelliott. If the Toronto Titans end up 3rd the LA Current will have nearly cemented their place for a third-consecutive appearance in the league final, following their surprise win last weekend.

Energy Standard is the clear favorite, despite losing their first playoffs match to the Cali Condors. Chad le Clos didn’t swim last week due to a sore knee, though they got along fine without him. Siobhan Haughey, Sarah Sjostrom, and Ilya Shymanovich, among others, cast long shadows over the rest of the competition in their respective disciplines.

Aqua getting second would be a big surprise.

After thinking about it I agree. Aqua’s strongest stroke is breast but Energy are likely to jackpot most of those races, so it won’t give Aqua enough of an edge over Toronto.

Based on results from the first two playoffs, I see:

I would be totally shocked to see Aqua get second this meet.

While disappointing for Toronto, the Roar fan in me wants them to come third because that all but guarantees Roar’s place in the final, even if they lose to LA in all 3 playoffs.