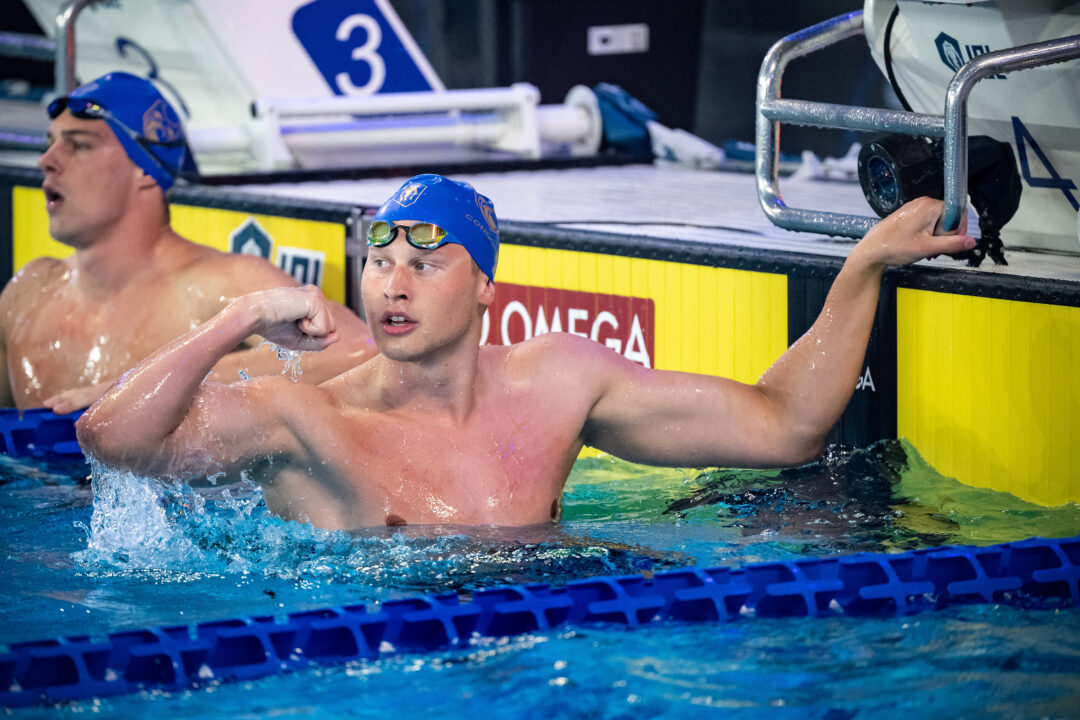 Justin Ress had a pair of 45-point splits for the Cali Condors, as the club outscored Energy Standard by 60 points over the relays to take the Day 1 lead. Archive photo via Giorgio Scala / Deepbluemedia / Insidefoto

After six dark weeks between matches, the opening day of the 2021 International Swimming League (ISL) playoffs largely lived up to the hype, with the only two championship-winning clubs in league history going head-to-head for the first time in 2021.

And although none of the winning times from Day 1 marked the fastest we’ve seen in Season 3, a pair of exciting team battles made every event intriguing.

The defending champion Cali Condors and 2019 winners Energy Standard were both racing shorthanded, with Cali missing Season 2 MVP Caeleb Dressel and Energy Standard only racing with 12 men and 12 women due to various illness and injury.

Nonetheless, some other names stepped up as the two teams traded momentum over the course of the day, with the Condors exiting Thursday with a 17-point advantage.

In the battle for third, the DC Trident and Iron renewed their rivalry after battling toe-to-toe at the Play-In Match at the end of September. Despite a big lead for Iron at one point, the Trident are up by 13 points heading into Day 2.

A very strong relay performance from the Condors, coupled with a costly disqualification from Energy Standard, led the 2020 champs to the team lead after the opening day.

Cali won three of the four relays and scored a total of 110 points across the team events. Energy Standard, on the other hand, only scored 60, with the men’s 400 free ‘A’ relay team getting DQed. With the Condors’ winning club jackpotting the other Energy Standard team, the event proved to be a 40-point swing in Cali’s favor.

The Condors had a standout anchor leg from Justin Ress in the 400 free relay, as he split 45.87 to run down Iron and DC and touch first.

To close out the day, Ress held DC’s Aleksandr Shchegolev (46.17) and Energy Standard’s Kliment Kolesnikov (45.95) at bay, splitting 45.97 on the freestyle to bring the Condors in for another big victory in the men’s medley relay.

DC also had a 20-point edge on Iron across the relays, with the men’s teams contributing 42 of their 66 points in the four events.

The relay disqualification was not the defining point of Energy Standard’s Day 1 performance, but rather it served as a rallying cry of sorts.

After that race, the team found itself down by 42 points to Cali.

However, over the course of four events (both 50 backstrokes and 400 freestyles), Energy Standard (and DC) essentially erased that entire gap.

The Trident scored 48 points to Iron’s 19 in the same four events, putting them in third for the first time all match.

And although Cali’s medley relay performances ultimately gave them the Day 1 lead, Energy Standard’s late push in the final four individual events was huge for their chances heading into Day 2.

As for the Trident, that surge dovetailed into the medley relays, distancing themselves by a further 10 points on Iron heading into Day 2.

Cali’s Lilly King and Energy Standard’s Ilya Shymanovich were back to their winning ways in the breaststroke events, sweeping the women’s and men’s 50 and 200-meter events, respectively.

The American also won the 50 breast for a third time in 29.44, with Energy’s Siobhan Haughey notably clocking 29.92 in fourth as she stepped in for an “off-event” swim for the shorthanded club.

King wrapped up her session with a blazing 1:03.89 breast split on Cali’s 400 medley relay, the fastest in the field by eight-tenths of a second. Between her three appearances, King finished the day with 39 MVP points, including a 19-point jackpot in the 200 breast.

Last week, the Belarusian notably tied the world record in the men’s 50 breast (25.25) at the European Short Course Championships in Kazan.

The Condors have Maaike de Waard, who tied with Energy’s Simona Kubova for the win in today’s individual 50 back, Beata Nelson and Olivia Smoliga to choose from for the backstroke skins.

Smoliga was fourth in the event today in 26.78 (with de Waard and Kubova’s winning time sitting 26.55), and Nelson won the 50 back skins in Match 2 and has been on fire all season.

The Condors also got the final say in the skins stroke for the men, opting for freestyle after Iron cut breast and the Trident eliminated fly.

Despite having Coleman Stewart as a top-tier backstroke option, Energy Standard could counter with Kliment Kolesnikov and Evgeny Rylov, so Cali opted for free, where they have the individual winner in Justin Ress leading the charge.

Energy Standard’s top 50 free finisher was Ben Proud, more of a drop-dead sprinter who would be expected to fade over the skins rounds. Kolesnikov will likely get the nod tomorrow, given he appears to be on sound form coming off the European Championships.

The favorite would probably have to be Iron’s Thom de Boer, the runner-up to Ress in the individual race, who has won the freestyle skins three times this season.