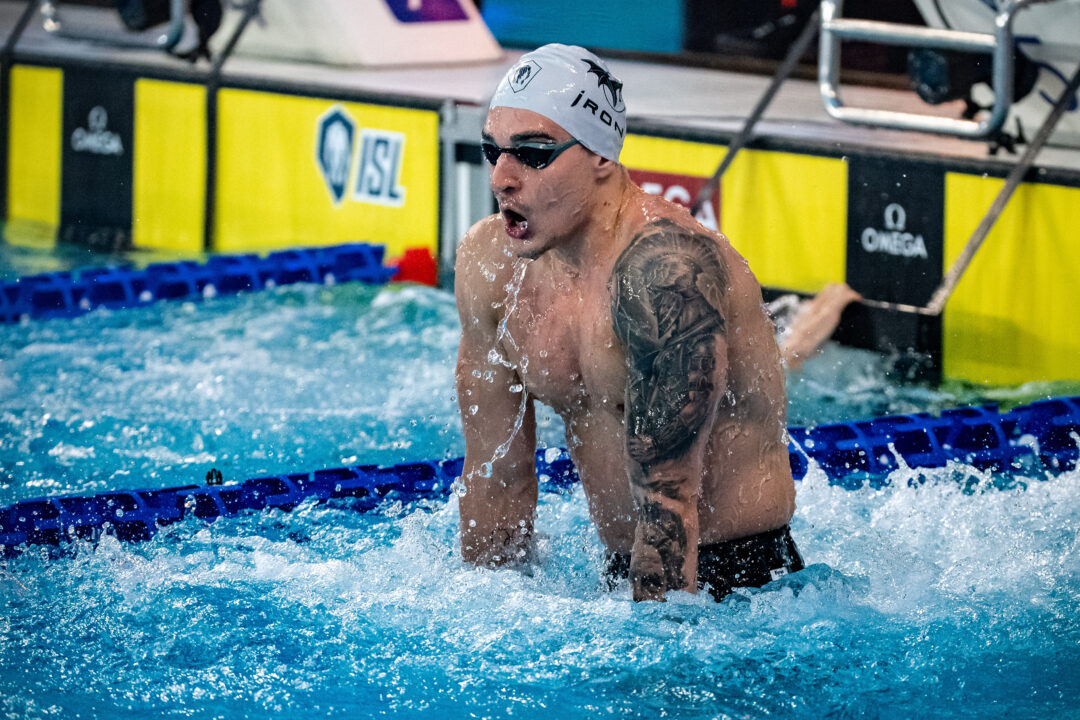 Basseto has won the 50 back for Team Iron twice this season and hasn't dropped below 4th place. His only events on day 1 are the 4x100 free and medley relays Archive photo via Giorgio Scala / Deepbluemedia / Insidefoto

Match 11 is the last chance for the DC Trident, Team Iron, Tokyo Frog Kings, ad New York Breakers to punch their tickets to the ISL season 3 finale in Eindhoven. The top two teams will advance and the bottom two will go home.

ron duo Guilherme Basseto and Robert Glinta have been strong in the 50 back. But, Basseto (who has won the event twice this season and has not finished lower than 4th place) is not entered in it for this match. Instead, Lorenzo Mora will race the 50 and Basseto will be rested for both the 4×100 free and 4×100 medley relays.

While Iron has some of the strongest 50 and 200 butterflyers, Linnea Mack and Maddie Groves have been dominant forces in the 100 fly for DC Trident. At the beginning of the season, Mack got 2nd in Match 5 but Groves picked up the pace and recently snagged 4th in Match 9 above Mack.

DCT’s Klaudia Nazieblo has had success in this event too, but they opted to have her swim the 200 back without the back-to-back double. Alys Thomas and Emilie Beckmann will represent Iron in this event.

On the men’s side, DC Trident kept Zach Harting, who placed 3rd in Match 9 with a 50.56, in but switched out teammate Aleksandr Shchegolev for Camden Murphy.

New York Breakers kept in Jakub Majerski and Matt Temple, both of whom out touched 50 fly legend Nicholas Santos of Team Iron in Match 10 in this event.

Nazieblo and her DC Trident teammate Ali Deloof  lead the field in the 200 back but we can’t count out Tokyo’s Paige Madden who has placed high in this event throughout the season. Madden will have a tough triple with the 200 back, 4×100 free relay, and 400 free.

Tokyo’s Grigory Tarasevich will be the swimmer to watch in the men’s 200 back. He’s coming off a great 200 back performance in Match 10 where he won by .22 over Iron’s duo of Lorenzo Mora and Robert Glinta, both of whom are swimming the event again.

DCT’s Jacob Pebley opted to swim this event instead of the 200 breast where he placed 3rd in Match 9, nearly out touching Luke Greenbank for 2nd.

DC Trident also has an edge in the women’s 200 breast with Bailey Andison and Maria Temnikova.

On the men’s side, Tokyo’s Daiya Seto and Yasuhiro Koseki lead the 200 breast pack alongside Iron’s Erik Persson and DC Trident’s Cody Miller and Tommy Cope.

The 50 free sprint stars are all present, headed by Tokyo’s Catie Deloof and Iron’s Ranomi Kromowidjojo and Melanie Henique. Deloof took victory in Match 10 against them.

The men’s 50 free could be the New York Breaker’s time to shine. Stan Pijnenburg got 2nd ahead of Iron’s Marco Orsi and Thom de Boer in Match 10. But Tokyo’s Vlad Morozov and Pedro Spajari are serious contenders as well.

The women’s 200 IM race will be one to watch. New York Breaker’s Abbie Wood gave Tokyo’s Yui Ohashi someone to race in Match 10, tying her for 1st place. Wood also will swim the 200 breast and 400 free while Ohashi has both relays.

In the women’s 400 free, Barbora Seemanova of Iron is coming off a close win over Tokyo’s Paige Madden in this in match 10. Iron’s Andrusenko got 3rd and will also be in the hunt. Madden has the 4×100 free relay before this while the 400 will be Seemanova’s first race fo the day.

New York Breakers’ Brendon Smith dominated the men’s 400 free in Match 10 and will have a rematch with Iron’s Luiz Altamir Melo who placed 4th that day.