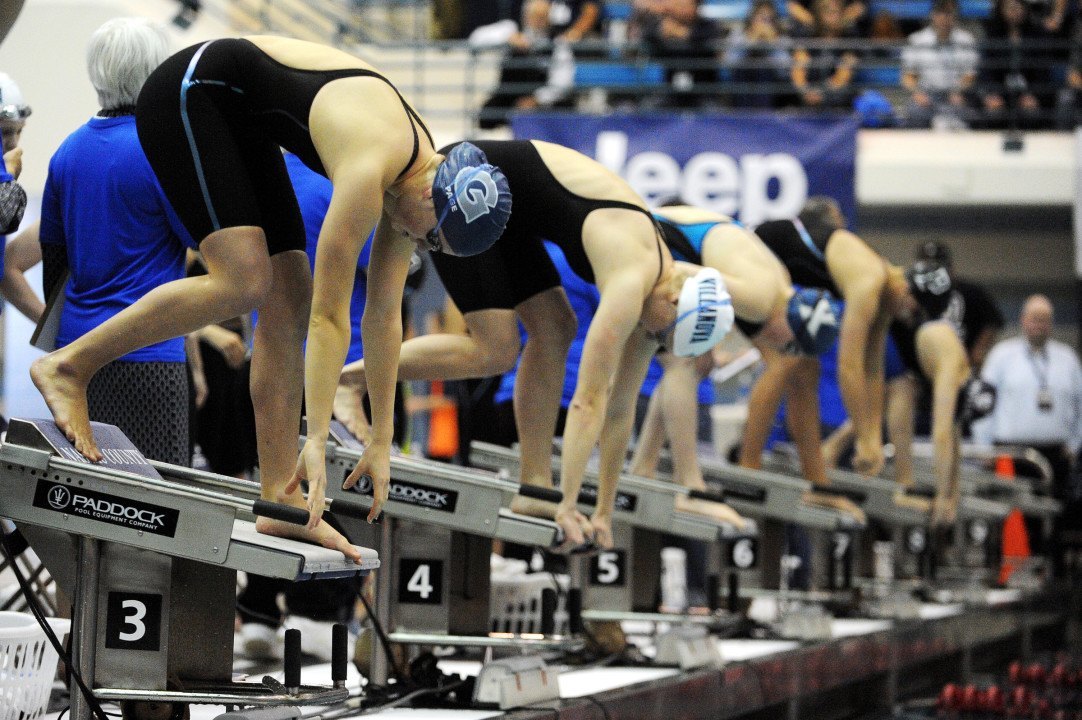 The Seton Hall men's 800 free relay was disqualified after starting the meet off by winning the 200 medley relay, going from 1st to 4th in the team standings. Archive photo via Will Schneekloth

The 2021 Big East Swimming & Diving Championships are now in full motion at the SPIRE Institute in Geneva, Ohio following the conference’s decision to cancel fall 2020 sports and move championships to spring. The Big East is one of ten Division I mid-major conferences to push their 2021 championship meet dates to after the 2021 NCAA Championships, which ran from March 17-20 (women) and March 24-27 (men). The competing swimming and diving teams include Butler University, Providence College, Seton Hall University, Villanova University, University of Connecticut (UConn), and Xavier University. Coming in these championships, the Villanova women are on the hunt for their 8th-consecutive Big East team title while the Xavier men are looking to three-peat their 2019 and 2020 team titles.

The first session of the 2021 Big East meet featured the timed finals of the men’s and women’s 200 medley relay and 800 free relay. Splitting the two relays was the men’s 3-meter diving final, where four divers competed to split 68 total points. Scoring a 1-3 finish for the Villanova men on the 3-meter diving board were junior Michael Ackert (604.85) and freshman Noah Clipman (527.30), combining for a 36-point pick-up. The lone male representative for UConn was junior diver Justin Corres, who placed second with 539.05 points. Providence junior Griffin Conley placed fourth with 366.70 points, scoring 15 points towards his team’s score.

In the team standings, Villanova leads on both men’s and women’s sides after the conclusion of Wednesday night’s session.

It was an exciting final 25 for the anchor legs  during the women’s 200 medley relay, with the three teams swimming neck-and-neck towards the wall. At the finish, Villanova’s Perri Stahl (22.93) and Xavier’s Kali Fischer (22.53) touched simultaneously to tie for the relay title at 1:41.74. UConn’s Charlotte Proceller anchored in a 23.36 for a third-place relay effort of 1:41.95. Anchoring the Seton Hall relay for fourth place was Cornelia Jerresand, splitting 22.58 to combine for a 1:44.44 relay time.

It was another tight medley relay battle on the men’s side as Seton Hall anchor Thomas Minar and Xavier anchor Christian Thomas duked it out to the wall. While Thomas anchored a 19.91 to Minar’s 20.02, it was Seton Hall who came out on top by 0.05s for the win over Xavier 1:29.39 to 1:29.44. The Villanova relay finished in third place at 1:30.76, featuring Christopher Paynter‘s 20.02 anchor leg. Providence placed third at 1:32.05, highlighted by 20.57 anchor Philip Goeckel.

After anchoring Xavier’s winning 200 medley relay, Kali Fischer was back in the 800 free relay, leading off the squad in a 1:49.92. Heading into the anchor legs, Villanova was trailing UConn and Xavier by two seconds. However, Villanova anchor Kelly Montesi opened her leg in a 51.06 to pass UConn and Xavier after the first 100. Montesi would go on to split a blazing 1:46.35, the fastest women’s split by three seconds, and aid Villanova’s 800 free relay win at 7:19.35. UConn would settle for second place at 7:22.40 while Xavier placed third at 7:24.56. Seton Hall picked up another fourth-place relay finish at 7:27.30.

After Villanova’s two divers finished 1-3, Reid Hutcherson carried over the momentum to lead off their 800 free relay in a 1:38.71 to give the squad the early lead over Seton Hall lead off Gideon Langenbusch (1:39.46). However, Seton Hall was able to produce two sub-1:40 legs to propel past Villanova for the lead. The Seton Hall relay touched the wall first with a time of 6:35.31, but wound up being disqualified. The Xavier men finished second with a 6:39.64, yet wound up taking the relay title by default. Rounding out the relays were Villanova (6:41.08) and Providence (6:47.72), which earn second-place (34) and third-place (32) relay points.

Seton Hall’s disqualification was due to a swimmer, “crossing an occupied lane while exiting the pool”, according to the meet announcer. The potential 40-point win would have put Seton Hall in second place with 80 points, yet remain at 40 total points in the team standings.

This is not the first time a relay was disqualified due to an unrelated infraction and not from the race alone. At the 2019 Colorado Boys’ High School State Championships, two swimmers from the Discovery Canyon 200 medley relay jumped in the pool out of celebration following their (unofficial) win. Unfortunately, the out-of-the-ordinary celebration was not approved by meet officials, causing the team’s disqualification and costing them the team title.

Unlike the Discovery Canyon boys, the swimmer who crossed the lane following his leg, a German native, was mimicking what international swimmers have done when exiting the pool during relays at major SCM championship meets. Many times during these fast-paced relays, swimmers can be seen dodging waves under the lane lines in order to exit from the side of the pool instead of by the blocks for relay exchange view. This is a competition practice swimmers who have competed in Europe are accustomed to doing. Only the four middle lanes were being used, making the four outside lanes an option for an easy get-out.

According to the 2020-2021 Official NCAA Rules Book, Rule 2, Section 5, Article 1d states, “If a swimmer, who is one of the first three swimmers in a relay, crosses the occupied lane of another team, the relay of that swimmer shall be disqualified. Swimmers should exit the pool directly at the end of their lane”, which is considered interference and causing the disqualification.

With the 800 free relay DQ and absence of a 3-meter diver, the Seton Hall men went from 1st to 3rd to 4th, trailing the Xavier men by a 34 points. If Seton Hall’s relay had not been disqualified and Villanova earned 3rd-place points (32), the teams would only be separated by 14 points. Seton Hall will have to make up 64 points on leader Villanova in order to make up for their current deficit.

Current Team Scores (After Day One)

So it’s ok by FINA but not by NCAA? These kids didn’t even have meets this year to “practice” relay exists.
Absolutely ridiculous call by the officials. Have some common sense, he didn’t get in the way of anyone.

It’s in the rules for a reason. Officials just following the rule book.

How is it ridiculous? You can’t arbitrarily decide what rules get enforced and what ones don’t. It’s very plainly stated in the book. I found it after about a 10 second search. It’s under Rule 2, Section 5, Article 1d: “If a swimmer, who is one of the first three swimmers in a relay, crosses the occupied lane of another team, the relay of that swimmer shall be disqualified. Swimmers should exit the pool directly at the end of their lane.” If the coaches don’t like the rules such as these they absolutely have the power to introduce legislation to try and change or remove them.

What’s so difficult for these swimmers to just climb out by their block like they’ve done countless times? Why do something new or different for the first time at a major meet?

Assuming the photo is the correct location those high ledges can be brutal. The swimmer could have an injury that makes it difficult to get out from there

“[T]he swimmer who crossed the lane following his leg, a German native, was mimicking what international swimmers have done… This is a competition practice swimmers who have competed in Europe are accustomed to doing.”

What the swimmer did was not new or different, he did what he normally does to exit at a big meet. If the team had been able to have more meets in the season, this would have been caught when it was not such an important event.

I kind of feel sorry for the swimmer because he didn’t know that wasn’t allowed here.

It’s obvious their team hasn’t had any real meets to practice things like this. Xavier is the only team that seems to have had a real season just by looking at their meet schedule.

the call makes sense but that is an absolutely brutal way to get disqualified, especially on as grueling of an event as the 8free relay

Especially when they won by over four seconds!!

Why is Georgetown not participating this year?

Because they had no one on campus virtually all year and only brought back b-ball and some spring sports .