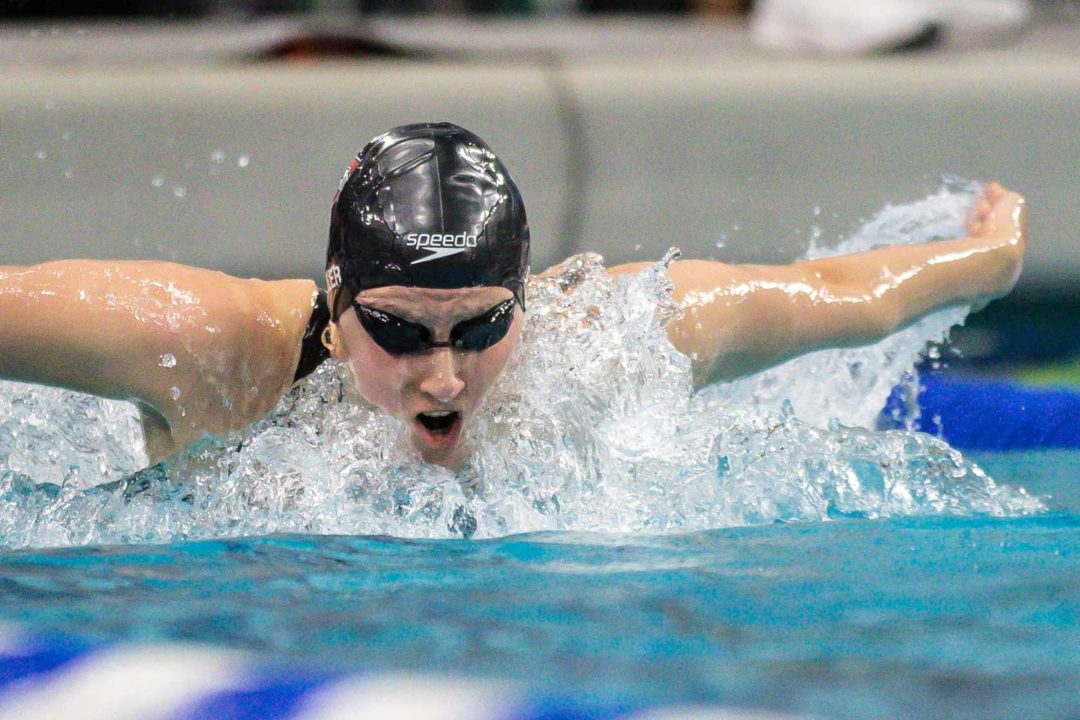 Here we are, the last prelims session of the 2020 Women’s Big Ten Championships. This morning we’ll see the 200 back, 100 free, 200 breast, and 200 fly. This afternoon will feature the early heats of the mile, and prelims of platform diving. Ohio State heads into today with a commanding lead over Michigan. The Buckeyes can seal their team victory up this morning by putting enough swimmers into finals. Ohio State is chasing its first Big Ten title since 1986.

The  Buckeyes have some things moving in their favor this morning. Only 3 Ohio state swimmers are entered in the 200 fly, however, among them is the defending Big Ten Champ, Kathrin Demler. Demler shouldn’t have an issue making it through to the A final tonight. Also likely to make appearances in the A final are Big Ten conference record-holder Vanessa Krause of Michigan, and her new teammate Olivia Carter.

Maggie MacNeil will look for her 3rd decisive victory of the meet today, as she enters the 100 free with the top time by a significant margin. MacNeil may end up more challenged in the 100 than she was in the 50 on Thursday, however, becasue the #2 seed is Indiana Cora Dupre, who shattered her lifetime best to win the 200 free last night.

Beata Nelson looked like she was cruising as she established the top time of the morning by 3 seconds. Nelson is the hands down favorite to take the title tonight, after swimming a 1:48.47 to do so last year. It was Northwestern that got the most swimmer in to the A final, with Both freshman Emma Lepisova and senior Krystal Lara swimming lifetime bests to qualify.

In the battle between Ohio State and Michigan, they each got a swimmer to the A final, 2 into the B final each, and 1 into the C final. Chloe Hicks leads the Wolverines with her 5th place 1:54.47 this morning, coming in well off her season best of 1:53.47. Right behind Hicks is Ohio State’s Kristen Romano, who swam a season best this morning.

Aside from Lepisova, there was another freshman to make the A final. Iowa’s Emilia Sansome swam a lifetime best 1:54.86 to finish 7th this morning. Iowa also had freshmen Julia Koluch and Kennedy Gilbertson qualify for the C final.

Wisconsin’s Lillie Hosack came out of heat 8 to make the A final, coming in as the only swimmer not from Ohio State or Michigan to make the A final. Hoscack was just off her personal best of 48.52 this morning. Maggie MacNeil, the 50 free champion, backed up her top seed in this event by swimming the fastest time of the heats. Teammate Daria Pyshnenko tied for 2nd, putting the Wolverines at the top of the heap.

No team came out better than Ohio State in this event, however, as the Buckeyes qualified 5 swimmers to the A final. in fact, all of the Buckeyes to make finals made the A final. Freya Rayner led the way for Ohio State, also touching in a tie with Pyshnenko. Amy Fulmer got out to a very quick start to swim a new lifetime best. IU’s Cora Dupre was disqualified, which was fortunate for Ohio State, since she would have bumped one of their swimmers out of the A final. Dupre was the champion in last night’s 200 free.

Noelle Peplowski and Emily Weiss swam side-by-side in the 7th heat, touching the wall for the top 2 times of the morning. The swim marked a huge lifetime best for Weiss, who hadn’t been under 2:10 before. Peplowski will take the top seed for tonight, having finished 6th at NCAAs in the event last year.

Michigan’s Miranda Tucker, the top seed and 100 breast champion from last night, barely held on to make the A final, touching in 2:10.39. Tucker still has the fastest best time in the field and will be a threat for the title tonight. It was Northwestern yet again that got the most swimmers into the A final, with Hannah Brunzell, Calypso Sheridan, and Sophie Angus sitting in the middle of tonight’s field. Brunzell and Sheridan were the only swimmes other than Peplowski and Weiss to crack 2:10 this morning. Sheridan is the 400 IM champion from last night, well Brunzell finished 6th in the 100 breast last night.

The Wolverines came up big in this event, led by Olivia Carter, who clocked a 1:53.99 to break the pool record, and narrowly miss the meet record of 1:53.95. Michigan also picked up 3rd and 4th place finishes from Vanessa Krause and Victoria Kwan, as well as a B finalist and 2 C finalists.

Defending champion Kathrin Demler was 5th this morning with a 1:56.06. Demler will have to be faster than last if she wants to win the title again, as both Carter and Northwestern’s Miriam Guevara were under her 2019 winning time of 1:55.23 this morning. Northwestern had another excellent showing, with 2 swimmers advancing to the A final.

There is a swim-off for 16th place between Minnesota’s Katherine Sullivan and Wisconsin’s Madison Waechter. The swim-off is significant for both teams, since Minnesota and Wisconsin are locked in a tight battle for 5th in the team standings.

How does a swim coach have a job when 90% of your points come from diving? Bottom quarter of this conference is just awful. Novitsky, Pablo, Gianiodis should be dismissed from their prospective programs.

Bucks showed UP! Depth over stars gets it done !

Why was Dupre DQ’ed?

False start for Dupre. It’s a shame nobody wants to win that way.

Ohio State with 5 in the A final of the 100 free – wow! Easily biggest surprise of this week

the 100 Free is the exclamation point of the meet for Osu and represents the story. M has some star power but lacks the depth. Star power wins dual meets and depth wins championships. #GoBlue