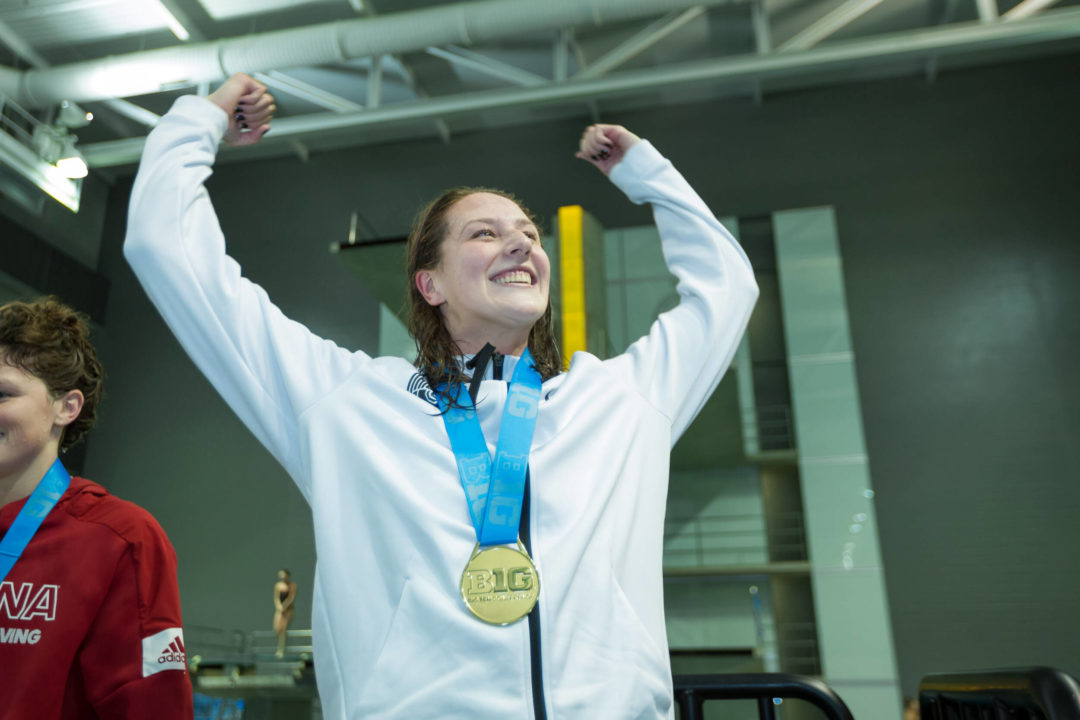 After breaking a 34-yr drought with their 2020 Big Ten title, the Ohio State Buckeyes have now added their 6th team title, tying for the 3rd-most in history. Current photo via Ohio State Athletics

The Ohio State Buckeyes’ 2020 Big Ten win in Iowa marked their first championship title since 1986. The program’s most recent title now ties them with Indiana for the 3rd-most Big Ten titles in history. Michigan remains first with 17 titles earned.

Heading over to this year’s Big Ten champions, Michigan’s Maggie MacNeil (50/100 free, 100 fly) and Wisconsin’s Beata Nelson (100/200 back, 200 IM) were the lone two swimmers to sweep all three of their individual events. Northwestern’s Calypso Sheridan was the only other swimmer to earn multiple individual wins thanks to her 400 IM and 200 breast titles.

Overall, the Michigan Wolverines earned the most 2020 Big Ten titles with 8 titles, despite taking second in the team scores. Next, Ohio State and Wisconsin both earned 4 wins while Northwestern captured 3 titles.

It’s noteworthy that while the Ohio State Buckeyes won the Big Ten title with only four wins, they were able to score 58 swims throughout the weekend.

The following stats were provided through the SwimSwam Swimulator.

According to our Swimulator’s ratings, Wisconsin and Ohio State are the most improved Big Ten teams this season. Last year, Ohio State placed just 3rd place overall while Wisconsin earned the addition of the 800 free relay title in 2020 (remaining 5th with Nelson’s 3-for-3 wins).

Looking at team strengths, Indiana (581.4 pts) was ranked stronger than Michigan (579.5 pts). One example of why this may be was the teams’ breaststroke representation. While Michigan’s Tucker won the 100 breast and A-finaled in the 200 breast (worth 58 points), no other Wolverines scored. On the other hand, Indiana was able to have Noelle Peplowski and Emily Weiss collect 109 points total from the 2 breaststroke events.

This is not a final prediction for the 2020 NCAAs, as many other Power Five/Mid-Major conferences have yet to compete.

While Michigan did not have the depth to win the Big Ten title, their top swimmers and relays look to score much higher than Ohio State at the national level. Our Swimulator has predicted Michigan to place 4th, putting them in a great position this year despite losing their 2019 seniors.

Last season, Indiana finished in 9th place, but after the loss of Lilly King among others a drop for this season was not unexpected. Ohio State looks to be on the right track to improving from their 25th-place finish at the 2019 NCAA meet, sitting in 21st with the Pac-12 women and a few mid-major conference championship meets yet to go.

Simulated NCAA points for all teams are also completely incorrect. It looks as though this article was done before times went into databases perhaps? Looking forward to the article update once all info has been inputted. Keep up the good work.

Isn’t this the same program that told us Ohio State was going to get 3rd at the 2020 big ten meet and only had a 4.6% chance to win?

Swimulator doesn’t predict or tell you who will get what place. It showed the scores teams would have if they were scored based on their season best times before the meet. I think there’s been a lot of confusion about that.

No Big10 times are inputted so the difference is significant. No Buckeye fan here, just a fan of accurate analysis.

I don’t see how Calypso Sheridan of Northwestern was not one of the Top 5 swimmers. According to the swimulator she is #3. Also Northwestern moving from 7th to 4th and scoring 400 points higher than 2019 seems like it should vault them into the most improved program conversation.

Couldn’t agree more. A move from 7th to 4th yet not one of the most improved teams?? How does that make sense? Seems like you’re always forgetting about the Wildcats…

Hi guys, the strength/improvement rankings have not been updated for the new year’s data yet ( the rest of Swimulator is up to date). Sorry for the confusion (though, keep in mind that it is a multi-year analysis, so Northwestern, while they had a great jump this year, won’t automatically jump to the top of those rankings).

Braden, will the article be updated to reflect the correct information?