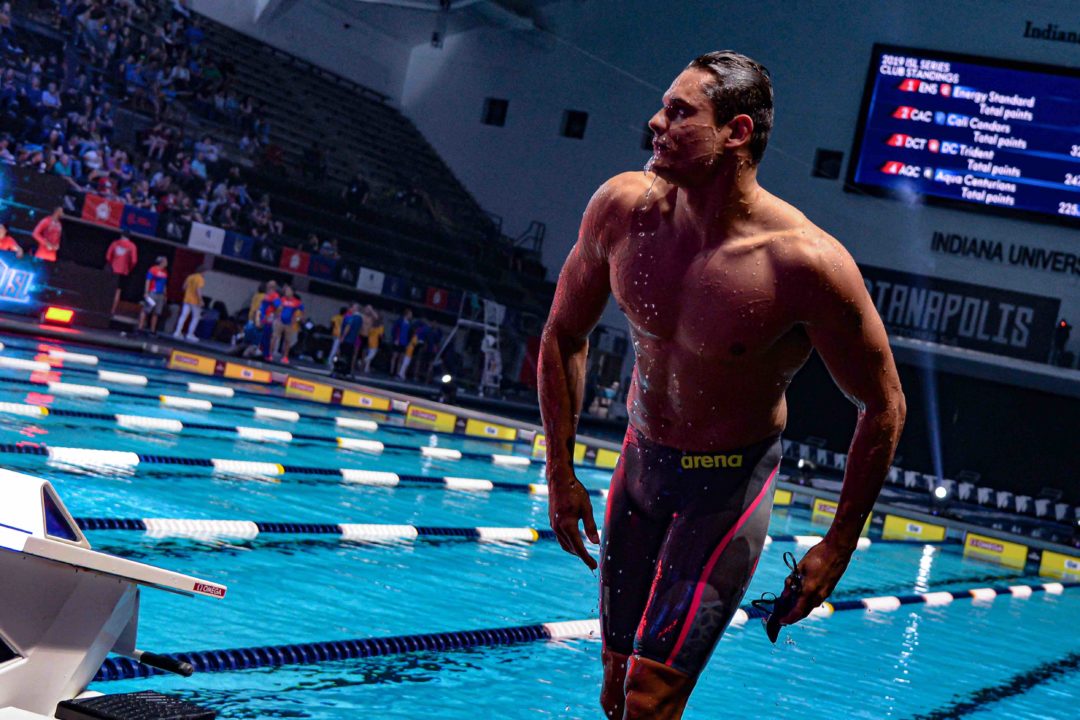 How did Florent Manaudou fare in the men's 50m fly? Find out in our Day 1 Euro Meet Recap from the intense action in Luxembourg.

Zach Apple began to close on him down the stretch and employed his patented straight arm technique over the closing meters.

The IM queen that is Katinka Hosszu of Hungary won the women’s long event decisively this evening in Luxembourg, scorching a winning effort of 4:36.02. That was enough to beat out 3-time Olympian Hannah Miley of Great Britain by over 9 seconds, with the Brit finishing in a time of 4:45.17.

Rounding out the top 3 was World Junior Championships bronze medalist Michaella Glenister, with the 17-year-old posting a time of 4:46.28. Glenister took the bronze in Budapest last year in 4:39.35, a huge new personal best. You can read more about Glenister’s rapid ascent among the junior ranks here.

In terms of world rankings, Hosszu’s time falls shy of the 4:34.37 she produced at the World Cup stop in her home nation of Hungary last October. That ranks her 2nd in the world taking into account performances since September 2019, with Japan’s Yui Ohashi sitting on the throne in 4:32.57.

Dutchman Arjan Knipping led the men’s 400m IM final from start to finish, registering a winning effort of 4:21.75. It appeared to be a relaxed swim for the 25-year-old who posted a much quicker season-best of 4:15.12 at the 2019 Amsterdam Cup last December.

Of note, Ukrainian freestyle ace Mykhailo Romanchuk performed in the slower heats, registering a time of 4:27.04. That wound up serving as a warm-up to his 1500m free event.

It was another strong Hungarian woman who pushed the 200m fly field to its limits, as Liliana Szilagyi got her hand on the wall first in 2:09.52, the only sub-2:10 mark of the final.

Trained by Hosszu’s former husband and coach Shane Tusup, Szilagyi has had a surge of strong performances in this event, most recently edging out the Iron Lady at the FINA Champions Series in Beijing. There, Szilagyi registered a time of 2:08.37 to Hosszu’s 2:08.56. Prior to that, Szilagyi notched a mark of 2:08.21 in Shenzhen, where Hosszu was 2:07.60.

18-year-old Ciara Schlosshan out-touched her British teammate and Commonwealth Games champion Alys Thomas by less than half a second. For City of Leeds’ Schlosshan, the 18-year-old was within striking distance of her lifetime best of 2:09.55 rocked at last year’s British Summer Championships.

That maintained a comfortable lead throughout over runner-up Sebastian Lunak of the Czech Republic, who touched the wall next in a mark of 1:59.10, followed by 17-year-old Igor Troyanovskyy and his bronze medal-worthy time of 1:59.35.

Croenen is the fastest Belgian ever, holding a lifetime best and NR of 1:55.39 from when he finished 7th in this men’s 200m fly event at the 2015 World Championships in Kazan. In Gwangju, the Flanders Swimming Federation member didn’t fare as well. Although he hit a strong 1:56.35 to rank 6th out of the heats, his semi-final result was 1:59.12 and well out of the final.

As for Troyanovskyy, the Ukrainian crushed a time of 1:57.78 as a 16-year-old in April of 2019 at the Ukrainian Nationals. That marked his first time ever under the 2:00 barrier and remains his best effort to date. The teen won the European Junior Championships gold medal in a time just outside that monster mark, topping the podium there in 1:57.86.

It was a 1-2 finish for the Italians in tonight’s women’s 800m free final, with the multi-European Junior Championships medalist Giulia Salin reaping gold in a time of 8:36.85. The teen trailed teammate Giorgia Romei heading into the final 100 when Salin made a move to get to the wall first ahead of Romei’s 8:37.47.

Salin took the gold at the European Junior Championships in this event in a time of 8:29.19, a championships record, while she also topped the 1500m free podium and snagged silver in the 400m free at that meet.

Although it was a 2-man race in this 1500m, Ukrainian Mykhailo Romanchuk made a statement with his new meet record of 14:53.38. Great Britain’s Daniel Jervis led 23-year-old World Championships silver medalist in this event through the 500m mark, when Romanchuk eased into the pole position and never relinquished it.

Romanchuk’s silver medal-worthy time in Gwangju last year came in at 14:37.63, so the man’s result tonight is solid for it being January. It overtook his own meet mark of 14:55.18 set at the 2017 edition fo this meet.

Romanchuk’s time tonight is just off his 14:51.61 posted at the World Cup in Doha last November. Jervis enters the upper echelon of the rankings, however, hitting spot #3 with his effort.

The women’s 100m backstroke was a tad lackluster in the sense that no woman got under the 1:01 threshold. Ukraine’s Daryna Zevina socred the victory in a time of 1:01.26 to have some breathing room ahead of Germany’s Jenny Mensing and her runner-up mark of 1:02.60.

Honey Osrin of Great Britain, the 200m back silver medalist at last year’s European Junior Championships. rounded out the top 3 in 1:02.84.

Italian World Junior Champion and all-around young star Thomas Ceccon found his way to the top of the men’s 100m back podium tonight, putting up a solid swim of 53.80. Splitting 26.29/27.51. Ceccon overtook the previous meet record of 53.83 set by Robert Glinta of Romania last year.

Ceccon led-off the Italian men’s medley relay in a quick 53.37 at last year’s World Junior Championships, a time which remains as his personal best in the event.

Swedish World Record holder Sarah Sjostrom showed once again that she is in a league of her own when it comes to sprint fly events, taking this women’s 50m dash in a menacing 25.12.

The Swede’s time checks-in as the fastest in the world since September 2019, overtaking the previous #1 time of 25.62 notched by Russian Arina Surkova in at the World Cup stop in Kazan. For reference, Sjostom clocked a winning time of 25.02 in Gwangju for World Championships gold last year, so the 26-year-old is very much in form at this January meet.

Runner-up went to young Naele Portecop, the 16-year-old French woman who was within range of her 26.12 personal best and French age record in this event. Portecop registered that mark en route to 4th at the World Junior Championships, after having finished with the silver in 26.29 at the 2019 European Junior Championships.

The Ukrainian duo of World Record holder Andrii Govorov and younger teammate Vladyslav Bukhov got it done in the men’s edition of the 50m fly tonight. Govorov hit the wall in 23.07 to finish a fingernail ahead of 17-year-old Bukhov.

Bukhov already soared to a personal best of 23.37 this morning and knocked another .23 off to check-in with an even quicker outing this evening to beat bout bronze medalist her Florent Manaudou.

Bukhov’s outstanding swim would have earned gold at the 2019 World Junior Championships, where tonight’s 100m back gold medalist Thomas Ceccon topped the podium in 23.37.

As for Govorov, his 23.07 was quicker than the 23.30 he put up during the FINA Champions Series, giving a good sign that he has fully recovered from shoulder surgery.

You are not counting Guilherme Costa 14:55 from December

A legendary Hungarian dominated too.

But she games the system remember

You are so nice to her calling it “games”. There is no game – she is the leech to FINA system. We are all enraged with FINA’s corrupt spendings paying big money to bureau suits for doing nothing. FINA paid $32,000 to Hosszu just recently for doing nothing. Do you see any difference? I don’t.

Do you know what’s happened to her. She skipped everything that she used to race in Luxembourg: 200BU, 100BK?
Is it that she doesn’t want to be in the dust again behind Szilagyi?

Croenen’s 200 fly swim 1:56.35 actually qualified him for the semis in Gwangju, but he didn’t do so hot after. Just a slight correction