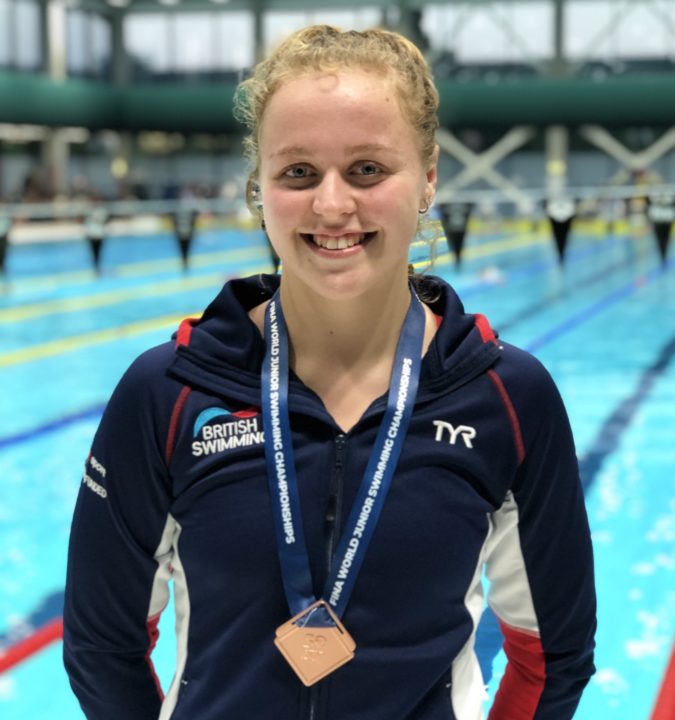 There’s dropping time, and then there’s the Michaella Glenister way of dropping time. The 17-year-old British rising star raced her way to bronze in the women’s 400m IM tonight in Budapest at the FINA World Junior Swimming Championships, and the Leicester Shark did it in style with a huge new personal best of 4:39.35.

Glenister’s performance is notably impressive considering her lifetime quickest entering this meet rested at the 4:47.69 she produced at the British Summer Championships just late last month. That outing rendered her as the gold medalist for 17-year-olds and helped the swimmer rebound from her non-advancing swim at the European Junior Championships. There in Kazan, Glenister clocked a morning outing of 4:51.04 to find herself 9th, behind her 2 British teammates and out of the final.

Prior to the aforementioned domestic meet, Glenister’s only other sub-4:50 performance came at the British Championships (World Trials) in April, where she took 7th in the senior women’s 400m IM final in a then-personal best of 4:49.13.

Flash forward today in Budapest, however, and Glenister re-wrote the book on how to make the most of an elite international appearance. She wasted no time making her medal-seeking intentions known, throwing down a monster morning effort of 4:43.27, slashing over 4 seconds off of that 4:47.69. That gave her the 2nd seed, just a tenth behind Spain’s Alba Vazquez.

Swimming fearlessly from the get-to in tonight’s final, Glenister busted out another remarkable swim, clocking a mark of 4:39.35 to take the bronze and dip under 4:40 for the very first time. All told, the Leicester Shark dropped over 8 seconds from her previous PB entering this meet.

At just 17 years of age, Glenister now ranks as the 6th fastest British swimmer, all ages, of all time.

I don’t want to get too optimistic but I think we may see her at the olympics next year. I wouldn’t put it past her to improve enough to take a spot in the 400 IM and considering GB’s poor depth in distance free she’ll probably also qualify in the 800 and 1500 free.

She’d need to drop an absolutely tonne to even be considered in the 800/1500. Not sure I see that happening. 400IM looks set to be a real scrap at trials with Willmott, Miley, Wood, Glenister, Shanahan and Colbert. A real event to watch in the coming years.

Considering she’s not in any kind of performance programme and just at a club think the girls just done amazing.

Here,here
Where’s the support from UK.

Exactly no performance programme no funding no long course training at Loughborough like other clubs invited to and all this can be seen when you see what clubs are invited to train there with swim England talent programme.