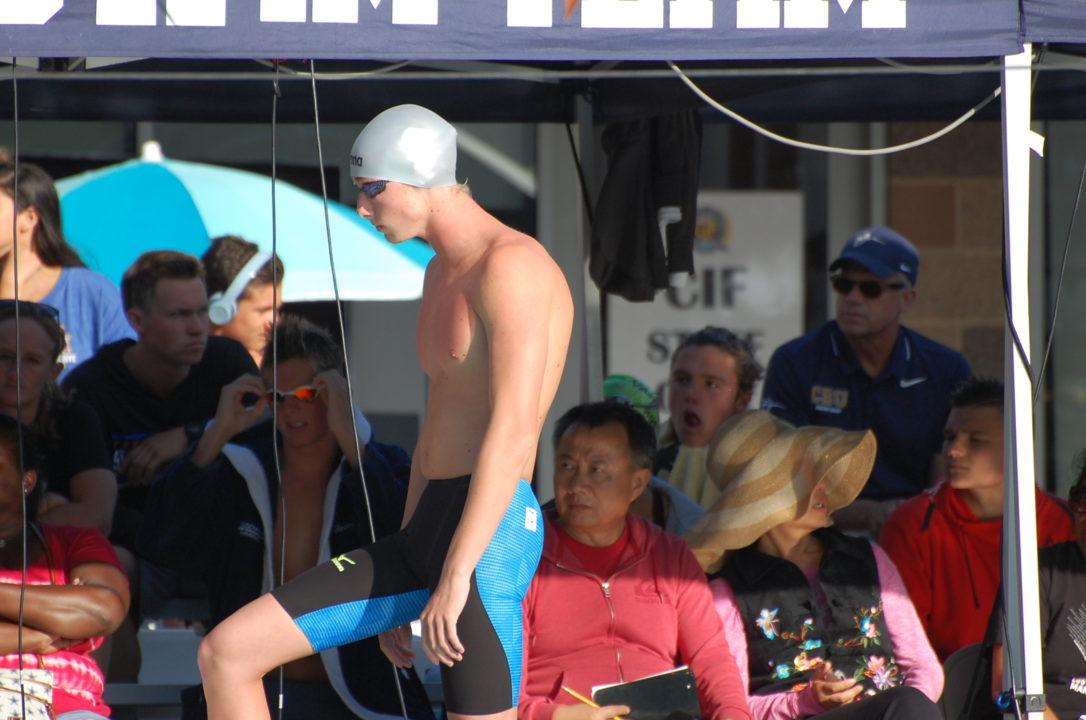 This morning, Olson popped a 51.85 in the 100 breaststroke, lowering the Texas A&M school record of 52.00 and nearly hitting the NCAA 'A' cut time of 51.67. Archive photo via Anne Lepesant

Tanner Olson had a big relay split for Texas A&M last night when he delivered the only sub-19 in the field with an 18.92 to anchor the A&M relay to victory. This morning, Olson kept the momentum going with a 51.85 in the 100 breaststroke, lowering Benjamin Walker’s 2020 school record of 52.00 and nearly hitting the NCAA ‘A’ cut time of 51.67. In total, Texas A&M picked up 5 NCAA ‘B’ cuts in the prelims of the 100 breast alone. Andres Puente Bustamante qualified 2nd in 53.01, though his 52.15 relay split from last night suggest he could go faster in finals.

Alex Sanchez, Vincent Ribeiro, and Jacob Schababerle qualified 3rd, 4th, and 5th, touching in 53.85, 53.97, and 54.24, respectively. For Sanchez, the swim comes as a massive best time and his first swim under 54 seconds–his previous PR stood at 54.29 from the 2020 Texas First Chance meet in October. Ribeiro also cut a significant amount (0.67) from his previous lifetime best and broke 54 for the first time, while Schababerle was just 0.19 off his lifetime best from March, but still inside the NCAA ‘B’ standard.

Thursday’s prelim session in College Station was a good morning for NCAA ‘B’ cuts with at least one swimmer getting a ‘B’ cut in almost every event.

Jing Quah and Camryn Toney lead the way in the women’s 400 IM where the Aggie duo finished in 4:10.91 and 4:11.57, respectively, far out-pacing the field. Qualifying 3rd was Taylor Pike in 4:18.22, cutting nearly 4 seconds from her previous lifetime best set nearly 4 years ago at the 2016 NCSA Spring Championships. Incarnate Word’s Ximena Conde qualified 4th with a new PB of 4:20.10.

Before Puente Bustamante and Ribeiro notched their ‘B’ cuts in the 100 breast they did it in the 400 IM with a 1-2 finish in prelims and just 0.01 apart, Puente Bustamante finishing in 3:50.11 to Ribeiro’s 3:50.12. Puente Bustamante led Ribeiro the entire race except for the first 50, where they were separated by 0.01, and then at the 350-yard turn where Ribeiro had caught up to him on the first 50 of freestyle. Puente Bustamante, however, reeled him in over the final 50 to out-split the freshman by half a second. A&M’s Hudson Smith finished 3rd in prelims in 3:53.20 and LSU’s David Boylan 4th in 3:55.71, neither best times but they are both within potential striking distance of NCAA ‘B’ cuts if they swim near their respective lifetime bests in finals.

The men’s 100 fly was one of the few races that did not produce any NCAA ‘B’ cuts, though A&M’s Jace Brown was only 0.15 away with a 47.58, making him the only swimmer sub-48 in the prelims. Incarnate Word had a strong showing, qualifying three swimmers for the ‘A’ final tonight, leaving only one spot to LSU. All four A&M swimmers that swam the race, however, qualified for the ‘A’ final, and three of them–Brown, Kraig Bray (48.04), and David Oderinde (48.38)–are the top-3 qualifiers.

Chloe Stepanek further proved her versatility in freestyle this morning by taking the top seed in the women’s 200 freestyle in 1:44.84, over two seconds under the NCAA ‘B’ cut time. Stepanek also improved her lifetime best by nearly three-quarters of a second, taking it down from a 1:45.51, set in December 2019. LSU’s Katarina Milutinovich qualified 2nd in 1:46.95, just under the ‘B’ standard. The ‘A’ final of the women’s 200 free will be evenly split between Texas A&M and LSU with each team qualifying 4 swimmers. Stepanek was the night one champion in both the 50 and the 500 and has so far dropped time in all of her events.

Shortly after the 200 free, Stepanek and Milutinovich secured themselves as the top-2 seeds in the women’s 100 backstroke, once again earning ‘B’ cuts. Stepanek’s time of 53.68 takes nearly a full second from her lifetime best, while Milutinovich’s effort of 53.83 sits just a couple tenths shy of hers. A&M’s Emma Carlton (53.85) and Kara Eisenmann (53.90) also earned ‘B’ cuts, though neither was a lifetime best.

The men’s 100 backstroke also did not see any NCAA qualifying times this morning, though Shaine Casas leads the way with a 48.37. After posting a 44.25 leading off the medley relay last night there is no doubt Casas will be much faster tonight. A&M freshman Collin Fuchs dropped over half a second to qualify 2nd to Casas in 48.53.

Y’all did him dirty with that throwback high school pic

Question I keep wondering but never think to ask-how do you pronounce Shaine? It’s not the simple “Shayn”, is it?