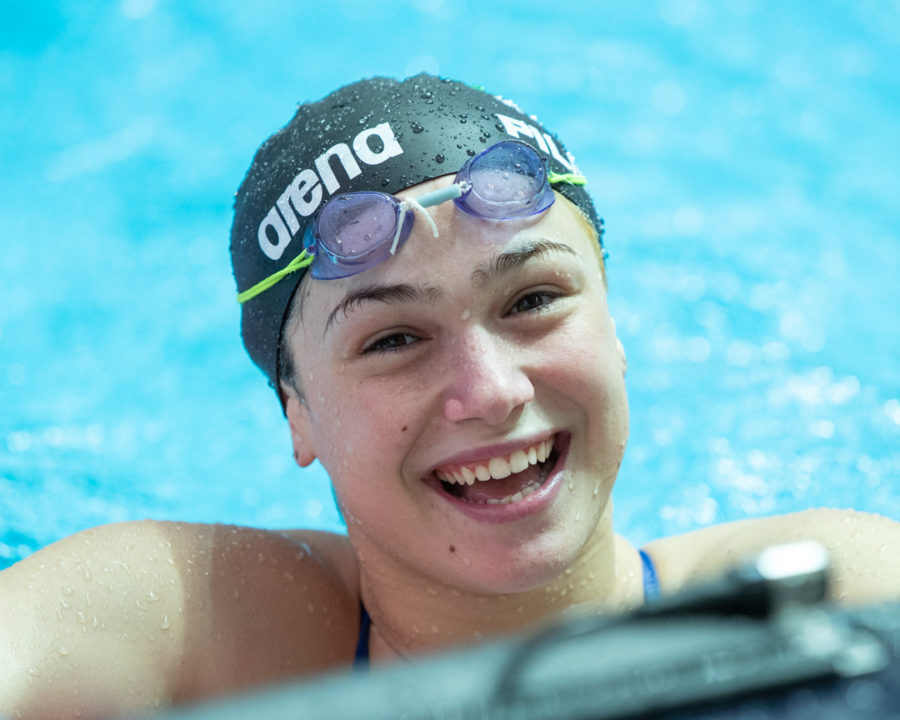 The 2019 World Junior Championships wrap up a busy summer of 2019, beginning Tuesday morning in Budapest. Here are some headlines to watch for on day 1: Archive photo via “Rafael/Domeyko Photography”

A busy summer of 2019 essentially caps off this week with the last major international meet of the season: the World Junior Championships. Here are some quick headlines of the major stories to watch at the first prelims session, taking place Tuesday morning, Budapest time, or very early morning U.S. time:

One of the youngest swimmers in the entire competition could break a world junior record today: Italy’s Benedetta Pilato. Pilato turned 14 earlier this year and went on to win silver at the World Championships in the 50 breast, going 29.98 out of heats and 30.00 in finals. Though the fastest time ever done by a junior is 29.48 from Ruta Meilutyte in 2013, that was before FINA officially tracked world junior records. As such, the official record mark stands at 29.86, also from Meilutyte.

Pilato has only been eligible to break WJRs for about eight months, and has almost three and a half years left of eligibility. She could make her first crack at the record books this morning, especially if she goes after heats the way she did at senior Worlds.

The boys 400 free should kick off the meet, and it’s about as close a field as you could hope for in a race so long. American Jake Mitchell is the top seed at 3:48.09 – he was the breakout star of U.S. Nationals earlier this month, but if he wants to win gold here, he’ll have to hold his taper and repeat a swim that was 4.7 seconds faster than anything he’d previously swum in his life.

Same goes for Russia’s Aleksandr Egorov, who cut 2.4 seconds from his lifetime-best to take silver at European Juniors last month in 3:48.28. Australia’s Thomas Neill has taken about six seconds from his time this season, coming in at 3:49.98. There are plenty of fast risers further back in the field, too, and this race should be one of the most fun to watch this week.

Vaskina Looking for Consistency in 100 Back

Russia’s Daria Vaskina has been up and down this year. The European Junior champ was just 1:00.17 in that final (seven tenths off a lifetime-best from April), but still won by a second and a half. Senior Worlds was a roller coaster. Vaskina first went 1:00.66 (more than a second off her best) to barely squeak into semis in 16th. Then in the semifinals, she matched her lifetime-best (59.46) to qualify for the final, where she faded back to 8th in 59.74. She then closed the meet leading off Russia’s medley relay in a disastrous 1:01.08, causing the Russian team to miss the final entirely.

She’ll need more consistency to hold off some young talents seeded behind her. Canada’s Jade Hannah is the returning bronze medalist from 2017 in this event, and sits #2 on the psych sheets, while versatile American 15-year-old Claire Curzan is one of the top young names to watch from the #3 seed.

A preview of 200 Free Slugfest Rematch in Girls Relay

Of the two relays this morning (boys 4×100 free and girls 4×200 free), the girls 4×200 is probably the more intriguing. While teams may have an alternate or two on their teams this morning, we should still see a lot of the top names competing. At some point on day 1, we should see a preview of a stellar individual 200 free rematch. The gold, silver and bronze medalists from 2018 Junior Pan Pacs are all in attendance in Budapest, and all three should lead their relays today.

Claire Tuggle won gold last summer as a 14-year-old, and is one of the top American age group talents with a real shot at a Tokyo Olympic berth. She was 1:58.58 last summer and already 1:58.21 this year. Australia’s Lani Pallister, 17, took silver last year by just 0.42 seconds, and hits the revenge tour in Budapest. She was 1:58.83 leading off a relay at Junior Pan Pacs last summer, and actually got her revenge on Tuggle by winning that very leg (Tuggle was 1:59.3 leading off). Then Japan’s Nagisa Ikemoto was the bronze medalist individually, only 0.02 behind Pallister. Ikemoto has already been almost a second faster this year (1:58.19) and might actually be the favorite this summer.

Whoa, can’t believe that World Jrs are about to start! Hope for a fast meet!

Who is the smiling swimmer in the photo that SwimSwam just doomed to have a lousy meet;)

Pilato, have a feeling we will get to know her very well over the next few years

They should put some light braces on her lower teeth at this age . They could straighten fairly naturally as her jaw grows. Not only to match her well spaced top set but she might become famous & needs a better smile .

I’m definitely starting to see why nobody likes you, 13%

They specialise in inappropriate comments.

‘Hi my name is Mr Tooth . I am bent but would like to be straight . Please can you help me ‘ .

Dude. Neither appropriate nor necessary.

You must be really funny at parties…

You think he gets invited to them?

Hoping Lani has better luck than her Mum did at international competitions. Janelle still has one freestyle PB (800 free – 8-24.15) superior to Lani’s best.

Anyone else have Hungarian news on Fina TV ? Not swimming

I just started up the FINA TV stream for the heats and it’s showing the news in Hungarian.

Correct country . But I want what I paid for 😮

Me too. I was thinking of sending them a support request but it took them 4 days to reply last time …

The stream is working now.

The best part is on too late at night anyway but I’ll probably watch the replay tomorrow.

Thank you CBC for allowing me to watch the heats live – no commentary though (guess that might just be for finals?) which yeah will probably too late for me. ETA – oh commentary just arrived online..

No commentary on FINA TV either.

Yeah … you have got to ask yourself where this guy suddenly came from. Didn’t compete at either the 2018 or 2019 junior european championships and now he produces a time in prelims that would have easily won him the gold at the european junior championships last month …

Zombori has been known as a huge talent among Hungarian swimming fans for years, he holds many NAG records, especially good in freestyle and backstroke. And he competed and medalled at the Euros this year, please check your facts before posting BS and shade.

His freestyle development could be big for the Hungarian 4×2 with Kozma, Milak and Nemeth.

Yeah, cuz we Hungarians have a reputation of being cheaters…*eyes roll*

@ Amen: Maybe because he was not even 16yrs old last year?