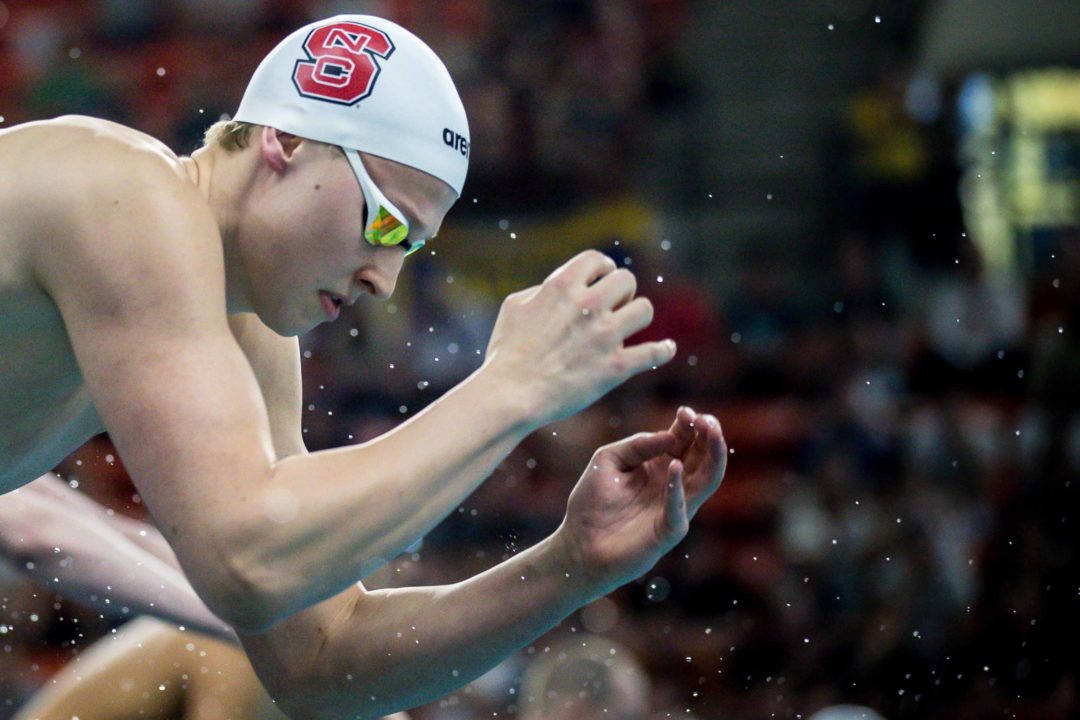 NC State, Texas and Cal have almost endless options for 400 medley relay lineups tonight. We try to puzzle out the options between sessions. Current photo via Jack Spitser/Spitser Photography

This morning’s medley relay, in particular, offers lots of lineup flexibility for the top programs. Here’s a look at who swam prelims and which teams could improve with a new finals lineup:

There shouldn’t be that much lineup change in the 200 free relay. NC State is one of the rare teams with an option to switch lineups, but it may not make sense for them to take it. They went with freshman Nyls Korstanje (19.27 leadoff) and sophomore Giovanni Izzo (18.76 anchor) this morning, and Izzo’s strong swimming in particular might allow them to compete for the national title without using Coleman Stewart. Stewart is pretty essential to the 400 free relay and is already on tonight’s 400 medley relay, so he’ll have to sit out either this relay or the 200 medley tomorrow night.

Texas made a bold call on Jake Sannem twice this morning. The USC transfer had only gone 21.21 and 43.08 individually in the sprint frees this season, but blasted two huge splits today. His 18.70 anchor leg probably puts him back on this relay tonight.

Tate Jackson should join this relay after going 18.95 in the individual 50 this morning. Drew Kibler should return after a 19.14 leadoff and a 19.08 individual. The tough call, then, is between Sannem (18.7 this morning), Daniel Krueger (19.02 with an extremely-safe 0.42 relay exchange this morning) and John Shebat (18.72 split last year).

Townley Haas could put up an 18.8-or-better split. But there’s two reasons not to use him: first, Krueger, Shebat and Sannem have all shown they can be at least that fast. And second, Haas would face a tough 200 free relay/500 free double, a combo very few men have ever even attempted at the NCAA Championships. With Haas hoping to defend his 500 free title, it’s probably better to keep him off this relay.

Tons of lineup-swapping potential for Texas here tonight. Austin Katz was 44.9 this morning on backstroke, which is a good swim. But John Shebat is the #4 performer all-time in the 100 back and could take six tenths off that split with a lifetime-best in finals.

Charlie Scheinfeld is the only good breaststroke option, and split a promising 51.3 this morning. Drew Kibler swam fly (45.6), and Texas can almost-certainly improve that split with either Shebat (45.07 at Big 12s) or Tate Jackson (lifetime-best 45.7 individually). Meanwhile Sannem split an excellent 41.8 on free, but Texas could improve with Jackson (lifetime-best 41.0 flat start) or Kibler (lifetime-best 42.1) or even Haas (41.1 split last year on the 400 free relay).

The Wolfpack used Coleman Stewart on back (44.32), and even though he might be their best flyer, it’s hard to pull him off the leadoff leg when NC State could get a lead like that on the opening leg.

Last year, NC State swam Daniel Graber on breaststroke but swapped him for Jacob Molacek in finals. Graber was 52.08 and Molacek only 52.3, so they may have reason to avoid that move this season, though Graber was only 52.3 this morning with a relatively safe relay start. He was 51.8 at ACCs.

Noah Hensley swam fly (45.49) this morning and Molacek free (41.63). NC State has the option of using Justin Ress on free or back, and perhaps Andreas Vazaios on back, fly or free. Stewart could swap to fly, and Molacek could swim breast, fly or free. Meanwhile Nyls Korstanje (44.9 at ACCs) could jump in as the flyer. The puzzle combinations are pretty endless.

If we had to guess, NC State will probably prioritize clean water and go with Stewart on back and stick to Graber on breast, followed by Korstanje on fly and Molacek on free. That would save Ress (and Vazaios if needed) for both of the remaining relays, with Coleman Stewart also in play for both remaining ones.

Cal could swim an entirely different lineup tonight. Bryce Mefford swam back today (45.38), but that may be, in part, to get a rested time on him, since he’ll have the 200 free beforehand tomorrow. Carson Sand swam breaststroke with an admirable 51.9 split, Zheng Quah was 45.5 on fly and Michael Jensen 41.6 on free.

Daniel Carr should probably take over backstroke duties tonight. He was 45.2 in this event last year. On breast, it’s a choice between relatively untested freshman Reece Whitley and star Andrew Seliskar. Whitley was 51.18 coming out of high school but has only been 51.3 so far this year. (He did drop seven tenths from seed in his 200 IM this morning, but didn’t surpass his high school best). Seliskar hasn’t swum the 100 breast much, but his 1:49 200 breast suggests he could split in the 50-points.

Again, the options are pretty endless. Our best bet: Cal chooses to use Seliskar here and not on the 200 medley tomorrow, where he’s a lower-impact split. A Carr/Whitley/Seliskar/Hoffer lineup might have the highest ceiling, if Whitley and Hoffer better their high-school bests. Carr/Seliskar/Hoffer/Sendyk might be a safer bet.

These teams are loaded with talent, which makes the relay choices more complex than otherwise.

The races will be close, so the coaches are under pressure to make the right moves.

NCState might just switch out fly. Keep Malock on free. Could be vazaios or krostanje

Have to think Townley is a candidate for the 400 medley anchor as well.