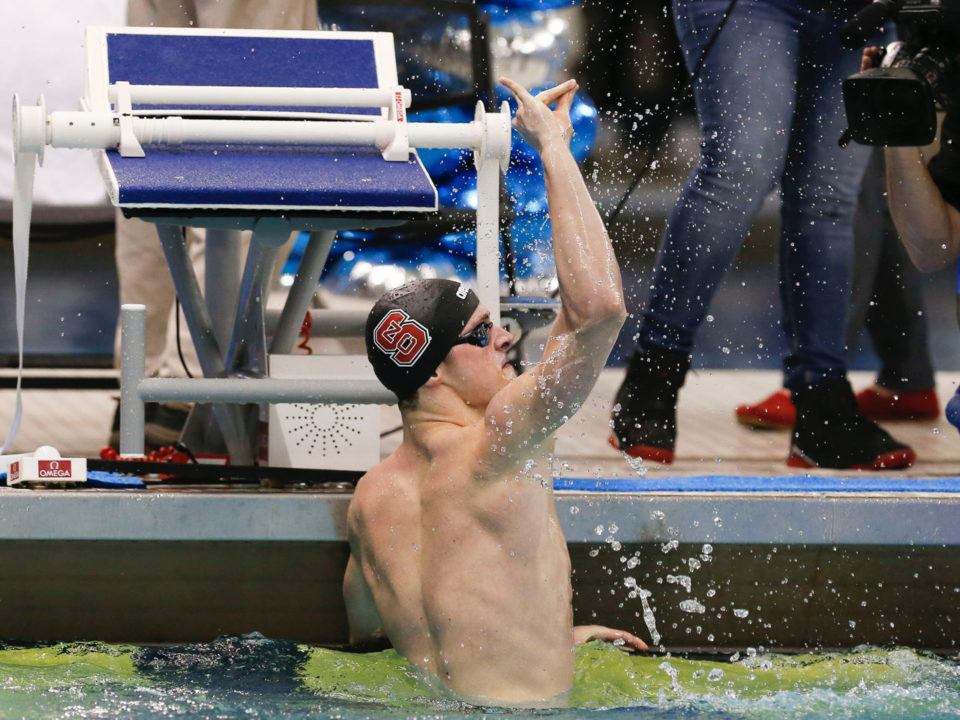 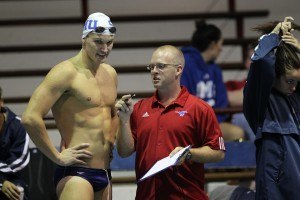 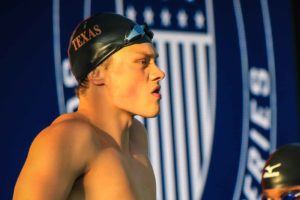 The reigning 100 backstroke champion returns as NC State’s Coleman Stewart is the top seed heading into NCAAs. Stewart took down the ACC Record in this event at last month’s conference meet with his 44.36 leadoff leg of the 400 medley relay. He’s now the 4th fastest performer ever in this event. Teammate Andreas Vazaios, who took 3rd last season, is also looking to return to the championship final.

NC State isn’t the only team who could get 2 men into the A final. Texas will field 2017 and 2018 NCAA runner-up John Shebat and last season’s 4th place finisher and 200 back champ, Austin Katz, who both have best times sub-45. Shebat is the 3rd fastest performer ever in this event. His 44.35 from 2017 is a hundredth faster than Stewart’s ACC Record.

The only other returning championship finalist in this event is Louisville’s Nick Albiero, who broke 45 for the first time at this season’s ACC meet. There are a handful of other men coming in after breaking 45 for the first time at midseason or their respective conference meets. That includes Alabama’s Zane Waddell, Indiana’s Gabriel Fantoni, and Arizona State’s Zachary Poti. Georgia’s Javier Acevedo, who had a foot injury in the lead up to SECs, has yet to break 45 this season, but has been sub-45 with his relay leadoff at 2018 NCAAs. Acevedo is a returning B finalist along with Waddell and Poti.

Ivy League champion Dean Farris is changing his lineup this season. Farris typically competes in the 200 freestyle on day 2, but has opted for this event instead. His 44.62 from the Harvard-Yale-Princeton meet in early February makes him the 9th fastest performer in history. Between Farris, Shebat, Stewart, and Grand Canyon’s Mark Nikolaev, we’ll have 4 of the 10 fastest performers ever competing in this race. With his 44.61 at the 2018 Hawkeye Invitational, Nikolaev became the 8th fastest performer ever. Nikolaev scored in the B final of this event in 2018.

I’m suprised you don’t have Justin Ress in the mix at all. That’s someone I’ll be looking out for out of the first heat in prelims.

Hard to call him a sleeper… but I totally agree. He has the raw speed in both LCM and SCY… he just hasn’t shown that yet in SCY backstroke. I don’t see why he can’t outright win the event.

If he doesn’t make it, it’ll be because of underwaters

Ryan Harty has never really nailed NCAAs. whether it was because he was recovering from injury, or whatnot. This is his last chance, and he’s been looking good all year. Obviously I don’t expect him to win this event (but if he “hits”, he could definitely take the 200), but I think he will break 45 and make the final.

Not his last chance. He had one more year

Ah, good call. That redshirt year got me mixed up!

Katz no A final?

He came 4th last year didn’t he? I don’t think he’ll be top 3 but he could definitely make it in top 8