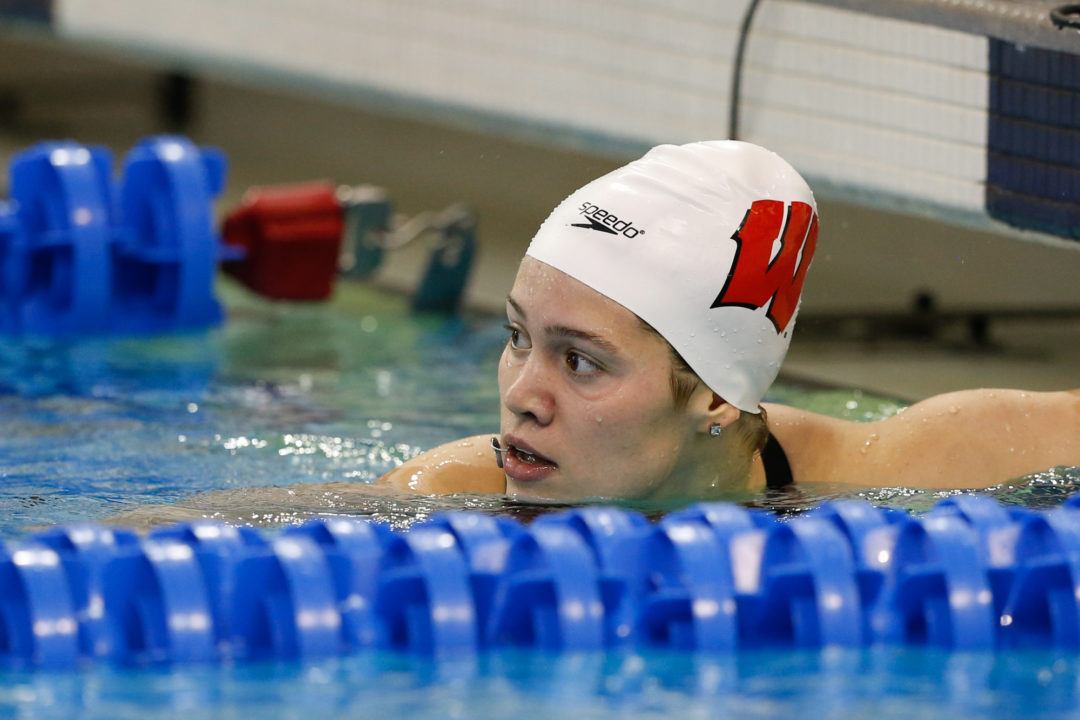 In the 200 IM, it was Wolverine Siobhan Haughey who won the 2018 title in 1:53.59, but Wisconsin's Beata Nelson has dominated this year, going 1:53.08 mid-season. Archive photo via Tim Binning/TheSwimPictures.com

Siobhan Haughey is the 9th-fastest performer in the event with her mid-season 46.72.

Led by Lilly King, Indiana had 8 out of the top 15 200 breaststrokers in Saturday morning’s prelims. That race tonight should wrap up the Big Ten title for the Hoosiers.

After Indiana and Michigan repeated as champs in the 200 medley relay and 800 free relay, respectively, two returning Michigan swimmers will look to defend individual 2018 titles, while a new champ will be crowned in the 50 free.

Rose Bi won the 500 free title as a junior, going 4:35.09. But she’ll face Minnesota’s Mackenzie Padington, who is currently the Big Ten’s top swimmer this season at 4:37.01. In the 200 IM, it was Wolverine Siobhan Haughey who won the 2018 title in 1:53.59, but Wisconsin’s Beata Nelson has dominated this year, going 1:53.08 mid-season. In the 50 free, last year’s champ Liz Li is gone, along with the entire top three. Michigan’s Catie Deloof is the top returner (22.16 last year), but her freshman teammate Maggie MacNeil has been 21.93 already this season.

Keep refreshing this page for live, event-by-event updates of all the swimming from Bloomington.

There weren’t any huge times at the top, but the depth of the 500 free is outstanding. The top 7 finishers are within nine tenths of a second heading into the final, led by this morning’s big dropper: Molly Kowal of Ohio State. The junior went 4:40.02, cutting more than five seconds from her seed. Kowal was 4:40.21 last year, so the drop ultimately constitutes about two tenths from her best.

Defending champ Rose Bi of Michigan is second at 4:40.23, joined by two other Wolverines in the A final: 6th-place Sierra Schmidt and 8th-place Rebecca Postoll, who won the B final last year.Their chief competition for the Big Ten crown is Indiana, which only put one into the A final: Cassy Jernberg at 4:40.25. IU had swimmers place 9th and 10th (Maria Paula Heitmann, 4:42.64; Josephine Grote, 4:44.54), though, and both had big drops from seed.

Minnesota got a pair of swimmers into the championship heat. Chantal Nack and Mackenzie Padington were both B finalists last year, but surged to 4th and 5th this morning.

In the team race, Michigan looks tough at the top with their 3 A finalists. But they have no other scorers. Indiana put only 1 into the A heat, but stacked the B final with 4 Hoosiers. They also have 1 C finalist.

Wisconsin’s Beata Nelson topped the 200 IM prelims, going 1:53.27, just about two tenths off her seed. Nelson was second last year to Michigan’s Siobhan Haughey, who is also in the A final. In fact, Nelson should swim in lane 4 tonight, with Haughey directly beside her in lane 3. Haughey qualified third, going 1:55.49. Nelson took her first revenge shot at Haughey this morning, breaking Haughey’s Big Ten meet record.

One event after Michigan dominated the A final of the 500 free, Indiana struck back with three A finalists in the IM. Bailey Andison is second in 1:55.40 – she’s a transfer in from Denver in her senior year, and made her Big Ten debut with a splash, getting under her own pool record. Fellow Hoosiers in the A final: Mackenzie Looze (1:56.01 as a freshman) and Lilly King (1:57.02 with a field-best 32.9 breaststroke split).

Wisconsin also got Lillie Hosack into the A final in 5th. Northwestern’s Calypso Sheridan is sixth in 1:56.18, and Ohio State’s Kathrin Demler is sitting 8th.

Indiana seems to be putting the heat on Michigan early. The Hoosiers have 3 A finalists to go with 2 B finalists and 3 C finalists in the 200 IM alone. Michigan has just one A finalist and 2 Bs tonight in the IM.

As soon as we start to put the spotlight on IU, Michigan fires back. The Wolverines are much more geared to the 50 than the Hoosiers are, and they qualified three of the top four swimmers into the A final.

Freshman sensation Maggie MacNeil powered away this morning with a 21.75. That’s a drop of two tenths from her season-best, boding well for the rest of the week. Catie DeLoof (4th last year and the top returner) was 22.07 for second. She’s on the cusp of her first sub-22 swim ever tonight. Meanwhile Daria Pyshnenko is fourth in 22.35.

Ohio State had a nice 50 free as well, qualifying Freya Rayner in third (22.18) and Taylor Petrak fifth (22.37). Rayner was fifth last year and the second-fastest returner behind DeLoof.

Wisconsin nabs their third A finalist of the morning with a 22.48 from Emmy Sehmann. Iowa gets their first swimmer into the top 8 for this year’s meet, with Hannah Burvill seventh, and Minnesota’s Zoe Avestruz makes a return trip to the A final after taking 7th last year.

Michigan charges back a bit in the team battle with 3 As, 1 B and 1 C. Indiana has qualified a lot of scorers this morning, but they’ve also gotten stung with a number of 9th- and 17th-place finishes. In fact, IU has been 9th in all three events and took 17th in both the 500 free and 200 IM.

Michigan will finish with 7 A finalists, 3 Bs and 1 C, while Indiana has less A finalists (4), but a huge crowd of B finalists (9) and 4 in the C heats tonight. We’ll have a more full scoring projection coming, but early projections show IU leading narrowly at the end of tonight – though their glut of 9th- and 17th-place finishes means their projected scores are a lot closer to the maximum than typical.

Though pre-meet projections had Ohio State and Wisconsin battling for third, the Buckeyes had a big morning and could be in the mix for a top-2 spot by the end of tonight. They have 4 A finalists, 8 Bs and 5 Cs, right in the hunt with Indiana and Michigan.

Am I right in only seeing IA have one individual scoring swim? Ooof….

Par for the course for Iowa

I’d say that’s a little behind, even for them.

Also, has adding the additional scoring heat to Ben done anything for point spreads? Feel like it’s just the big teams getting their 4-6 swimmers in. Not the minnows getting swims.

Any stats on this, Braden?

I thought this would be coverage on all of the teams, not just UM and IU.

Lol must be a fan of one of the 3 teams that didn’t put a swimmer in any finals tonight. I see coverage of Michigan, Indiana, Northwestern, Wisconsin, Penn State, and Ohio State. If Rutgers wants attention, maybe they should swim faster…

To be fair, the article is definitely focused on IU and Mich and treats everyone else as an “also ran,” even though, for example, OSU had a pretty good showing. But in general, I agree—if you want to be covered, git gud.

FYI Rutgers has a swimmer in a final tonight. Only Illinois and Michigan State do not have any individual swimming finalist tonight.

I’m the evolved version of you, git gud