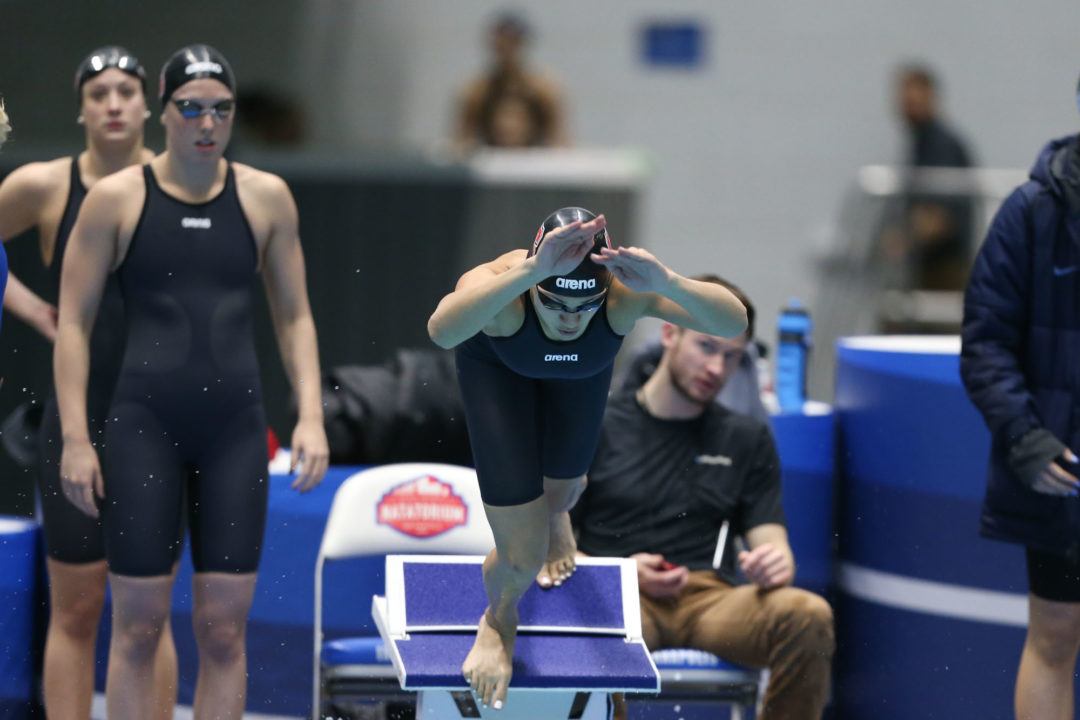 Louisville's Mallory Comerford will decide between the 500 free and the 50 free, and 2017 ACC 50 free champ Ky-Lee Perry looks to rebound after injuries limited her in 2018. Archive photo via Tim Binning/TheSwimPictures.com

After scoring three divers in the top 7, Florida State leads the women’s ACC after one day. But day 2 should see defending champs Virginia charge, along with top threats NC State and Louisville.

Virginia’s Paige Madden is the top seed in the 500 free at 4:39.19, though she’ll have to face defending champ Mallory Comerford of Louisville. Comerford won the 500 free last year in 4:36.09. She was the top 50 free seed as well, but scratched that event in favor of the 500.

NC State’s Julia Poole is the top returner in the 200 IM. She was third last year behind Leah Goldman (graduated) and Rachael Bradford-Feldman (no longer swimming). But the top seed is currently Louisville’s Grace Oglesby at 1:56.85.

In the 50 free, three of the top four were seniors last year, leaving Louisville’s Casey Fanz as the top returner. But 2017 ACC champ Ky-Lee Perry is healthy again after an injury-riddled 2018 postseason, and held the #2 seed behind the scratched Comerford. Virginia’s Morgan Hill should also be in the hunt.

Keep refreshing this page for live, event-by-event updates of all the swimming from Greensboro.

Virginia’s Paige Madden held up as the top 500 freestyler through the morning, cutting about a tenth from her lifetime-best.

NC State is primed to make a points run in this event, stacking three of the top four qualifiers. Anna Jahns was 4:39.98, dropping a full second from her previous best. Sophomore Tamila Holub is third (4:40.92) and Kathleen Moore (4:41.66) sits fourth.

Last year’s champ Mallory Comerford is fifth for Louisville in 4:42.25. Last year, Comerford cut about four seconds from prelims to finals, so watch for her to challenge Madden and the leaders tonight.

There were a few high-profile misses, as well. #3 seed Sophie Cattermole of Louisville added about three seconds to her seed, going 4:45.90 and missing the A final.

We’re expecting the team battle to come down to Virginia, NC State and Louisville. The 500 was undoubtedly a win for NC State, with 3 A finalists and one more scorer in the C final. Louisville put one into the A, one to the B and two in the C, while Virginia will have only one in the A and one in the B.

It was another great event for the Wolfpack, with 4 A finalists including the top two qualifiers. Freshman Sophie Hansson was 1:56.61 to take second, ahead of top-seeded Grace Oglesby of Louisville (1:56.99).

NC State also has senior Lindsay Morrow (6th) and Jessica Horomanski (8th) into the A final with drops of more than a second from seed. Louisville will also have senior Alina Kendzior in 5th, and Virginia put sophomore Abigail Richter in fourth with a 1:57.38. Further down the line, NC State adds one C finalist to their four championship finalists. Louisville has two A finalists and a B finalist, while Virginia has one in the A, one in the B and two in the C.

The morning has gone about as well as it possibly could for the NC State women. A pair of Ky(-)lees led another 1-2 finish for the Wolfpack, both breaking 22 seconds this morning. Junior Ky-Lee Perry looks back on the warpath after missing this meet last year with injury. Perry was 21.59 this morning, cutting more than two tenths off her lifetime-best and rattling the ACC meet record. On alert tonight: ACC meet record (21.54 from Caitlin Cooper in 2018), ACC record (21.48 from Caroline Baldwin in 2017) and perhaps even the pool record (21.32 from Simone Manuel in 2017).

Virginia’s Morgan Hill went 21.93 to be the last swimmer under 22 this morning. Hill was 6th last year as a sophomore in 22.21. More women have already broken 22 this year than did between prelims and finals in 2017.

Duke’s Alyssa Marsh is close, going 22.07 this morning. Louisville put two into the A final with Avery Braunecker and Jillian Visscher. Meanwhile UNC got Grace Countie into 7th, and NC State put a third A finalist up with Sirena Rowe‘s 22.38.

As we continue to track the team battle, NC State has set themselves up beautifully with 3 A finalists and 1 B finalist, while sneaking in with swimmers in both 8th and 16th. Louisville has 2 As, a B and a C, while Virginia holds 1 A, 1 B and 2 Cs.

We’ll have a more full scoring analysis coming later today. But for now, rough math indicates that NC State has double the A finalists (10) of Louisville (5) tonight, and more than three times as many as UVA (3). Louisville and Virginia should be set up pretty similarly, with 3 B finalists apiece. Virginia has 4 C finalists and Louisville only 3, but Louisville does have that 5-3 edge in A finalists.

Prelims video/stream? Where the heck is it?

Looks like NCST had a huge session — and while it’s still early, and without running any numbers, it seems like they are in the driver’s seat to win this meet.

I wouldn’t jump to any conclusion yet. This morning was definitely a great morning for NC State. But a LOT can change tomorrow morning / Saturday morning based on Louisville and UVA strengths/depth. Hopefully it will unfold as an exciting competition for the team title!

Oh, we be jumping!

The more telling stat is maybe the “wasted” swims… and Louisville had 7 of those, to UVA’s 4 and NCSU’s 2. So to me it looks like NCSU sitting in first, followed by Virginia and then Louisville. Also, NCSt used 15 swims this morning, Virginia 14 and Louisville used 17. Also, if last night showed us anything, it is that Virginia’s relays are better, and they have better diving, so that should help make up some ground in the coming day(s).

Wow…did not see that coming for NC State. Maybe in the 50, but not in the 500 and definitely not in the IM! Haan seems to be off so far between last nights relay and her 50 today. Any chance she’s swimming through ACC’s to have a big NCAA’s?

That’s my guess as well. I believe she is already qualified for NCs. She’s also a senior, so looking to have big swims at the main event in her final year?

I’d also just like to note that it isn’t that big of a surprise.

The team race is far from over, the 200 free and breastrokes are their weakest events, in terms of depth. Probably 1 A finalist per event… Maybe 2.
Can’t confidently see them stacking those like they did this morning.

But I would happily love to be proved wrong.

I completely agree that the meet is far from over, and I would add 100 fly to the list of events with little to no depth for nc state.

hasn’t looked as sharp overall this season, but could be

Why would one swimmer swim through the meet?? Especially if that one swimmer is not the best one on the team? I think she just might the one who is having a “sub par” meet for them this time around, but would not lower my expectations for NC’s with her.