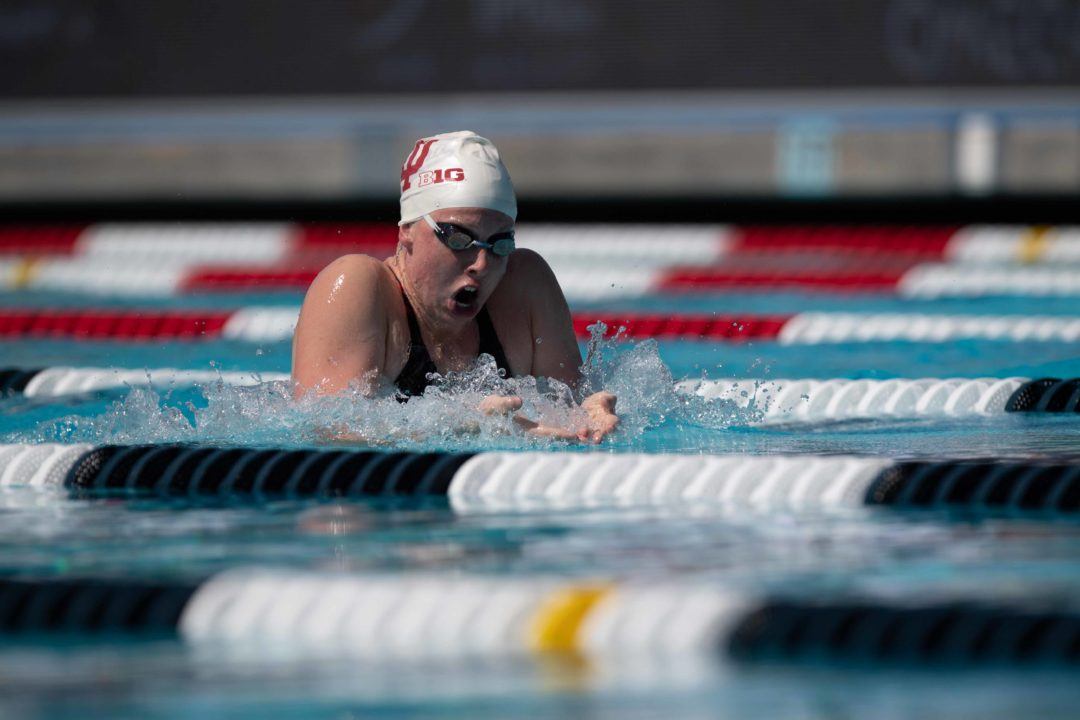 Led by Lilly King, Indiana had 8 out of the top 15 200 breaststrokers in Saturday morning's prelims. That race tonight should wrap up the Big Ten title for the Hoosiers. Archive photo via Mike Lewis/Ola Vista Photography

So this is it, the final day of the 2019 Women’s Big Ten Championships. A meet that was projected to be the tightest we’ve seen in years has the Indiana Hoosiers entering the final day with an 111-point advantage and their first Big Ten title since 2011 on the line.

In the final day of competition, those two teams, with Michigan having 11 A-finalists and Indiana 9, should finally pull away from a scrappy Ohio State team, who has been in the fight all week but put only 5 swimmers into A finals on Saturday.

Michigan qualified 20 swimmers and Indiana qualified 19 swimmers for Saturday night’s individual finals (which includes the mile, even though they technically are timed finals, not A, B, and C finals). While Michigan has more A finalists (11), Indiana’s 8 B finalists make that a pretty even match.

In short: besides awaiting the spectacular results of Lilly King in the 200 breast final (where a record seems to be a probability), that 200 breaststroke with 4 Indiana swimmers in the A final and 4 in the B final should be a final nail in the coffin to clinch the title for the Hoosiers (which, as always, is barring an unforeseen disaster like a relay DQ).

Who was I just @ing about Ohio State always finding a reason to be negative and complain? +1 for ChompChomp. Should we start keeping track?

Yes that comment was posted by the entire ohio state team. Seems fair 🙂 who was i just @ing about people finding any reason to pin against ohio state as a whole, probably you. Just leave them alone my dude.

I think it should read 20 finalists for MI not 29.