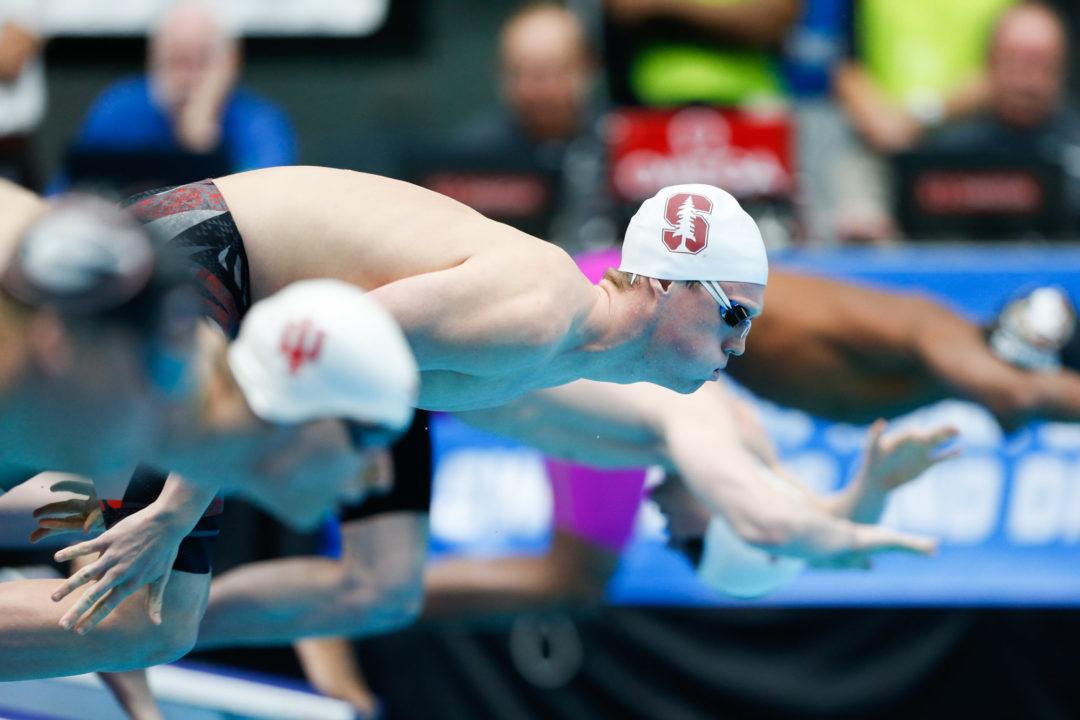 Swim fans should be ready for another great night of racing after a fast prelims session on the 2nd day of the 2018 Texas Invite. Archive photo via Tim Binning/TheSwimPictures.com

We should be in store for an exciting evening of racing on the second night of the 2018 Texas Hall of Fame Invite. This meet follows the same format as NCAA, except that there are no prelims relays, so tonight we’ll have the 200 free relay, 500 free, 200 IM, 50 free, and 400 medley relay.

The Arizona distance crew put on a show this morning, with Hannah Cox and Brooks Fail swimming the swiftest times in the 500 free prelims. Wisconsin’s Beata Nelson swam a nation-leading 1:53.0 in the 200 IM, while Stanford’s Abrahm DeVine took the top seed on the men’s side. A pair of Longhorns, freshman Grace Ariola and senior Tate Jackson, will be swimming in lane 4 in the 50 free this evening.

Arizona took 2nd, with Katrina Konopka‘s 21.29 split leading the way for the Wildcats. Jamie Stone led off in 22.48, and Kayla Filipek and Ashley Sutherland both split 22-low. Their time of 1:28.43 was also good for a NCAA A cut.

Tate Jackson became the first man to break 19 seconds this season as he led off the Longhorns’ relay with a 18.79. That’s a lifetime best for Jackson, whose previous best was a 18.95 from last season’s Big 12 Champs. It was a bit of an ad hoc relay from there for Texas. Townley Haas, who’s not likely to swim this at NCAAs with the 500 free right after it, split 19.01. Luke Bowman got the nod after breaking 20 for the first time this morning, and made the most of the opportunity with a 19.32 split, while relay veteran John Shebat anchored in 18.90. Even without Daniel Krueger, who’s likely to end up on this relay at NCAAs, that’s the 2nd-fastest time in the NCAA, just behind Cal’s 1:15.86 earlier tonight.

Arizona’s been swimming well though the first two days, and their men put together four splits in between 19.2 and 19.5 to take 2nd in 1:17.70, with Chatham Dobbs leading the way with a 19.26 lead off. Stanford finished 3rd in 1:17.97, while USC was DQ’d for an early take-off by Carsten Vissering. From the splits on the live results, it appears that USC would’ve finished right around 1:17-high without the early take-off, which was listed as only 0.02s.

Joanna Evans won this event for the second year in a row, securing a NCAA ‘A’ cut with a 4:35.76. That’s her 2nd-best time ever, ranking only behind last year’s 4:35.05 here. If Evans can back up this time at NCAAs, she and Evie Pfeifer stand a good chance of giving the Longhorns two women in the A-final come March.

The Arizona Wildcats have a pair of possible NCAA A-finalists themselves, as Kirsten Jacobsen (4:36.81) and Hannah Cox (4:38.18) took 2nd and 3rd tonight. Jacobsen placed 3rd at NCAAs last year, and Cox’s background suggests she should be able to make the A-final at NCAAs as well; she has a 4:37.82 under her belt from high school and made the B-final last year. Ayumi Macias finished 6th for the Wildcats, touching in 4:46.49.

Allison Schmitt had a small improvement  over her time from this morning, dipping under 4:40 to take 4th in 4:39.83.

Have we mentioned that Arizona’s distance crew is looking strong so far? Brooks Fail improved on his lifetime best for the second time today, dropping 1.7 seconds from prelims to finals and touching first in 4:11.84. That’s a NCAA ‘A’ cut and the 2nd-best time nationwide this season, ranking only behind the 4:11.45 Michigan’s Ricardo Vargas swam earlier this evening. Fail came into today with a personal best of 4:14.82, so he’s knocked that down by almost three seconds today.

Stanford freshman Jack LeVant also improved his personal best for the second time today, dropping over a second, 4:14.22 to 4:13.11, from this morning and taking 2nd behind Fail. LeVant set the Stanford record in the 200 free leading off the 800 free relay yesterday.

The only man faster than LeVant last night was Texas freshman Drew Kibler, who took 3rd tonight in 4:15.09. That’s his 2nd-best time, coming in only behind his 4:14.42 from last winter’s Speedo Winter Junior Champs.

It was an epic battle between those three men, as all three were virtually dead even at the 400, but Fail split 48.66 over the final 100 to take the win.

Stanford’s True Sweetser took 4th with a 4:15.71, while his teammates James Murphy and Johannes Calloni tied for 6th with a 4:18.50, both a bit slower than this morning.  Grant Shoults went 4:28.95 in the B-final after swimming 4:20.23 this morning in his first race of the season.

The top three women finished in the same exact order as they did in this morning’s prelims. Beata Nelson couldn’t quite match her 1:53.08 from this morning, but only Ella Eastin has been faster than Nelson’s 1:53.61 tonight.

The men’s 200 IM brought us the closest race so far this evening. Stanford’s Abrahm DeVine was in the lead at the halfway point, touching in 47.75, with Texas’s Sam Stewart and USC’s Patrick Mulcare both within a couple tenths. But it was Texas’s Matthew Willenbring, who split 29.84/24.31 over the back half, who nearly upset DeVine. In the end, DeVine held on to win by 0.06s seconds, while Willenbring had to “settle” for punching his first ticket to NCAAs and a time that puts him roughly 4th in the nation, pending other results tonight.

The top three women from this morning’s prelims retained their exact positions in the finals for the second event in a row. Texas freshman Grace Ariola led the way, touching in a time of 21.86 that was less than a tenth off of her time from this morning. Similarly, USC’s Marta Ciesla couldn’t quite match her prelims time, but her 22.03 was good for 2nd. Arizona’s Katrina Konopka dropped 0.05s from this morning, taking 3rd in 22.19.

Tate Jackson couldn’t match his 18.79 lead-off from earlier in the session, but still handily won the individual 50 free with a 0.2s margin of victory. 2nd place went to USC’s Nikola Miljenic, who went from 19.75 in prelims, just making the A-final, to 19.36 in finals.

There was about a two-tenths gap between Dobbs and the 5th place finisher, but only 0.04s separated 5th from 8th. Oklahoma Baptist alum Daniel Ramirez came out on top of that race-within-a-race, touching in 19.67, just ahead of Texas’s Drew Kibler (19.68) and USC’s Kyle Grissom (19.69). Cole Cogswell bucked the trend by touching 0.02s behind Grissom, rounding out the heat with a 19.71.

Scratching the 50 free final seemed to work out okay for Texas’s Claire Adams, as she swam her 2nd-best 100 back ever leading off for the Longhorns. Her time of 51.00 tied Beata Nelson, and moves Adams up to 2nd this season in the NCAA. Texas followed up strong splits from Olivia Anderson (59.78) and Remedy Rule (51.43) before Grace Ariola brought it home with a 47.78 anchor leg. Their time of 3:29.99 is faster than any other time heading into today, and appears to rank only behind Michigan and Cal’s times from earlier this evening.

USC kept things close for most of the race. Louise Hansson couldn’t quite match Adams (or Nelson), despite improving her best time this season from a 51.84 to a 51.43. Riley Scott had the fastest breaststroke split in the field with a 59.94, and Caitlin Tycz nearly duplicated Rule’s time with a 51.44 fly split. Texas only really pulled away on the final leg, as Marta Ciesla split a 48.64 en route to a 3:31.15, with both Texas and USC registering NCAA ‘A’ cuts.

Nelson powered Wisconsin to a 3rd place finish with a time of 3:33.33 that’s good for a NCAA ‘B’ cut. Texas’s B relay was also under the ‘B’ standard, with Kennedy Lohman actually splitting slightly faster than Anderson on the breaststroke leg with a time of 59.71, while Anelise Diener anchored in 48.19.

Notably, the fastest anchor leg of the evening came from Texas’s C relay, where Brooke Hansen split 47.73. Even when you factor in her 0.07s reaction time against Ariola’s 0.11s, Hansen still comes out just barely ahead. Arizona’s Konopka had the other sub-48 leg this evening, splitting 47.85 as Arizona’s finished 5th.

This was a rather strange, tantalizing race for Texas fans who’ve been wondering about the Longhorns’ medley relay this season, as it may have provided more questions than answer. The live results have Austin Katz leading off in 46.55 and freshman breaststroker Charlie Scheinfeld splitting 50.73. That seems slow for Katz and fast for Scheinfeld, perhaps indicating some sort of timing malfunction. However, Katz was about three seconds slower on the 800 free relay than he was at NCAAs, and a 46.55 is just about 1.5s slower than his best time, so it’s possible it’s accurate. (Update: race video appears to confirm that the splits in the live results are accurate). If so, then Texas has definitely found the answer to their breaststroke woes, and while they may not be immediate favorites to win this event at NCAAs, it definitely reduces the chance that they miss the A-final like they did last year. The back half of the relay was also intriguing. Instead of John Shebat and Tate Jackson, Jacob Huerta and Townley Haas swam fly and free, respectively, with splits of 46.69 and 41.68.

USC is rebuilding their medley relays after losing all of their legs except Carsten Vissering. Tonight, Patrick Mulcare led off in 46.28, Carsten Vissering split 50.81 on breast, Nikola Miljenic split 46.34 on fly, and freshman Alexei Sancov anchored in 42.96, en route to a NCAA ‘A’ cut.

Arizona picked up their first ‘A’ cut, enabling them to swim the other two relays they’ve secured ‘B’ cuts for at NCAAs. Chatham Dobbs led off in 45.69, Matt Salerno split 52.71 on breast, Noah Reid split 45.67 on fly, and Jorge Iga anchored in 42.58. Dobbs and Salerno were both faster at NCAAs last year, while Reid and Iga were faster than Arizona’s splits at NCAAs, indicating that they should be able to improve on last season’s 12th pace finish.

Texas women getting better and better!

And look out for Tate Jackson

Why cant UT get their stuff together and get their live results corrected. And update their meetmobile setting! Argh

Any idea what’s up with Danny Krueger?