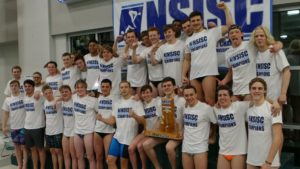 With the win, the Statesmen became the first school in conference history to win all individual swim and dive events in a single championship weekend. 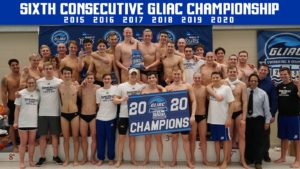 The Laker men have now won six consecutive GLIAC Championships and nine total GLIAC to tie Wayne State for the most titles among current league schools.

On October 3rd 2018, Long Island University Board of Trustees chair Eric Krasnoff announced that LIU Post will be merging their athletic department with their counterpart, LIU Brooklyn. The announcement was made at a press conference at the New York Athletic Club.

The LIU Post Division II athletic teams will become unified with LIU Brooklyn’s under a single Division I team, as part of the “One LIU” proposal.

“Today’s announcement regarding our athletic program’s enhancements will allow us to focus our resources on improving opportunities for our students while continuing the tradition of excellence of our university,” remarked Debbie DeJong, LIU Post’s Athletic Director. “This is an exciting beginning to the next chapter in LIU Athletics.”

The newly-minted Long Island University athletic team will join the Northeast Conference beginning in the Fall of 2019. The LIU Post Pioneers were originally a part of the East Coast Conference. The combination of the two programs ushers in a new blue and gold uniform for teams, as well as a new nickname and mascot that will reportedly be decided by students and alumni.

The merger presents a series of logistical questions for the split campuses. Many athletes will likely have to practice and compete at opposite schools, which are over 25 miles apart. The University has said they will provide necessary transportation to accommodate such athletes.

It is possible, however, that only the athletes from the Post campus will have to commute between the two schools. According to the Pioneer, there are plans to build a multi-purpose athletic facility on the Brooklyn campus beginning in 2019. It is unknown whether or not the plans include a new pool.

There are 18 teams – including women’s swimming – that are currently being played at both schools. If these teams were to be enjoined as a single Division I team, it could pose threats to many athletic scholarships, and therefore many athletic careers.

Echoing LIU President Kimberly R. Cline’s hopes for the merge to increase LIU’s brand recognition, Pioneer AD DeJong stated that: “We at Long Island University are dedicated to competing at the highest level of collegiate athletics. When evaluating our unified rosters, we will aim to maximize the number of athletic opportunities available while carrying on our tradition of excellence.”

Whereas DeJong ensured the safety of all current athletic scholarships for the 2018-19 season, not all Pioneer athletes will be guaranteed similar scholarships under the new LIU program. Because of limitations on Division I scholarships, not all former Division II athletes – assuming that they make the team – will be awarded the same amount of money, if any. Division II operates according to what the NCAA terms a “partial-scholarship model,” which essentially means that DII athletes are more likely to receive partial scholarships than DI athletes.

For many of the LIU Post athletes that rely on athletic scholarships, transferring to another Division II program would be their best option to continue their tenures as student-athletes. The NCAA has provided the school with waivers that will allow such athletes to pursue transferring. Coaches from LIU Post that head teams played at both schools will also likely have to look for jobs elsewhere.

The merge between two athletic departments – especially of two different divisions – has the potential to lead to reductions in both staff and rosters. The compositions of each team will ultimately be up to the University’s discretion. A Change.org petition addressing the possible fallouts from the merger currently has over 5,000 signatures.

You can watch the full press conference on the merger here.