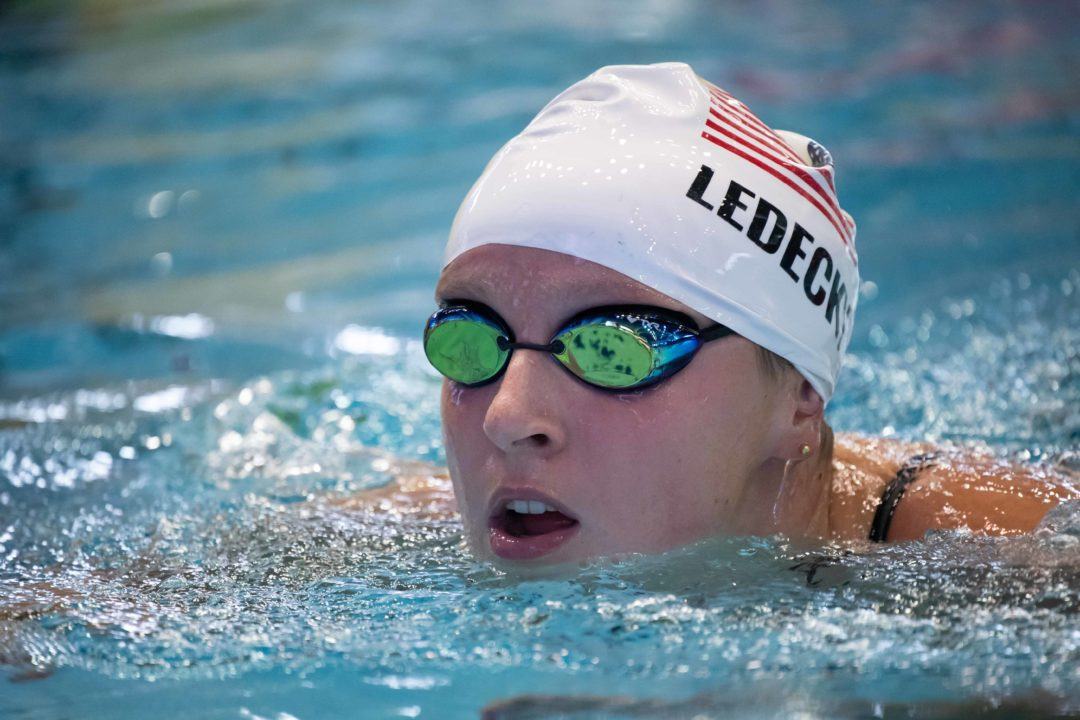 Katie Ledecky remains unbeaten in the distance freestyle races at major international competitions and continued to break records in 2018. Ledecky, who went pro following the NCAA season, broke the World Record in the women’s 1500 free this year, posting a 15:20.48 at the Indianapolis Pro Swim. That was one of many victories for Ledecky as she was crowned the female champion of the 2018 TYR Pro Swim Series.

During the NCAA season, Ledecky set an American Record in the 400 IM at the Pac-12 Championships (though that record was later broken by Ella Eastin). She went on to repeat as NCAA champion in the 500 free and 1650 free.

I know it is Katie’s life and decision, but how about a move back to Bruce Gemmell? They had a special athlete/coach relationship and he seemed to have a good handle on Katie’s speed/endurance training. In the end, though, it is Katie’s choice where she lives and trains.

Of course it’s her choice. But you’re right anyway.

7
0
Reply
Barney
Reply to  He said what?

Unless Ledecky changes her training, she will be beaten in both the 200 and 400 at the next Olympics. She is the greatest distance swimmer of all time, but her college coaches have not figured out how to help her go faster, for the most part.

Yes, the 11 American Records broken and the World Record broken by five seconds this year (not to mention 8 NCAA titles, 15 NCAA records, 6 NCAA meet records, and 8 international gold medals) thus far during her collegiate training sure reveal Ledecky’s college coaches to be charlatans, for the most part.

Nobody said that, but her success in scy can’t really be accredited to her coaches, it’s not as if she swam 8:04 in the 800 free before.

We really take her for granted

Katie always takes her races out fast, her competition is left eating her bubbles.

A. Titmus looks like a possible contender, as she swam at Katie’s pace for the 2nd half of the 400 free race at Pan Pacs. Titmus closed the gap a little on the last lap.

Those Chinese girls are coming hard for Ledecky in 2020. Females distance swimmers have traditionally peaked pretty early so Ledecky will have some head winds.

Yes, Titmus will be Ledecky’s biggest challenger. The Chinese aren’t as consistent in big competitions im sure Titmus will give ledecky a run for her money in the 400

Li bingjie is not consistent.

Some people saying the Chinese girls will challenge Katie ledecky?
There,s only one Chinese girl, not girls, and that,s Wang jianjiahe

Olivia Smoliga and Kelsi Worrell – not as impressive as it sounds, but 8 scm world medals plus American Records have to be worth an Honorable Mention. They carried the team this December. Every bit as impressive as King, in my opinion.

Short Course Worlds is a training meet. Only LCM counts

It was not only a training meet as u put it – but a serious stepstone for many of them leading to next year WC & Tokyo . Otherwise , they would have not performed the way they did .