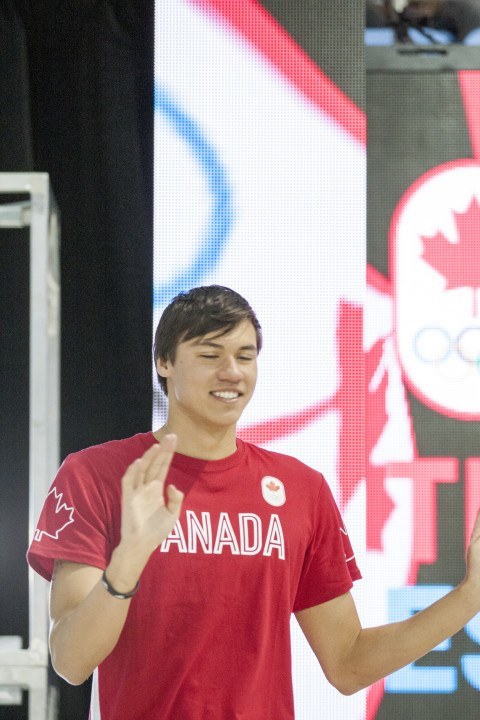 Markus Thormeyer won the Canadian men's only medal in swimming at the 2018 Commonwealth Games. Archive photo via Chris Tanouye, christanouye.com

At Canada’s two major international meets of 2018, they won just two pool swimming medals. One came from Yuri Kisil in the 50 free, behind the Michael Andrew/Caeleb Dressel battle that took most off the attention at the meet.

The other came at the 2018 Commonwealth Games, where 20-year old Markus Thormeyer took his first major international medal individually when he scored a bronze in the 100 back (54.14).

Thormeyer is young enough, and fast enough, to represent a reasonable leading edge for Canada’s men as they look to build something like their women. He ranked 23rd in the 100 back globally in the 2017-2018 season.

His year kept rolling into the collegiate short course season, where in early November he broke the Canadian Record in the 200 back with a 1:52.12 at the Odlum Brown Limited Colleges Cup. The swim was a surprise at an event that is a fairly big college meet, but still just an in-season meet. That lines him up for a huge meet in February when he lines up for UBC at the 2018 U Sports Swimming Championships.

Mack Darragh – In 2016, Canadian swimmer Mack Darragh was a late-season tag on to the Canadian Olympic roster. When it was announced that Canada’s 400 medley relay had been called up to the Olympic Games, Canada needed a butterflier (and a breaststroker), and Mack Darragh (and Jason Block, in the latter case) was the best candidate to fill that role.

While Canada finished 16th out of 16 teams in that relay, behind non-traditional swimming powers like Greece and Lithuania, and Darragh had the slowest butterfly split in the field, that lone Olympic swim seemed to spark a career that had become stagnant.

That made him the only Canadian man to break a National Record in long course in 2018 (the women broke 3, two of which came from our Canadian Female Swimmer of the Year Taylor Ruck).

That 1:56.27 didn’t win Darragh any medals. It didn’t even land him in the top 25 in the world. But the 25-year old is now trending very-much in the right direction ahead of the 2020 Tokyo Olympics.

What? You mean three medals, with Eric Hedlin winning a silver medal in the 10K open water event at the PanPacs. Although open water swimming seems to be ignored by many swim fans, I believe that with improved technology (drone photography and/or individual tracking) it will eventually become recognized as much more exciting than pool swimming.