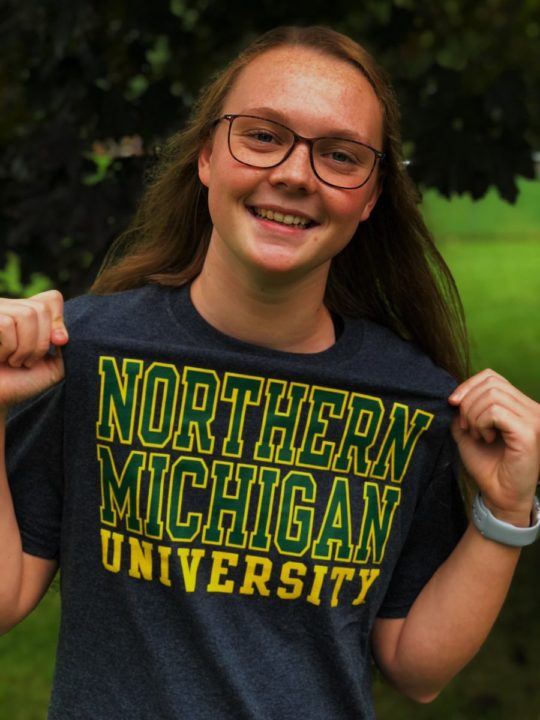 Northern Michigan University star swimmer Rachel Helm is going to get a new training partner next year: Jenna Joerger, of Eagan High School and Blackline Aquatics in suburban Minneapolis, has verbally committed to the Wildcats.

Joerger is primarily an IMer, backstroker, and butterflier, who is arguably the team’s best commit since junior Rachel Helm, a two-time NCAA Division II National Champion. The two swimmers will overlap for a season in the Upper Peninsula, where they will find themselves as likely training partners. Nelms is Northern Michigan’s best 200 IMer by almost 8 seconds this season with a 2:03.30. Joerger’s best time, from November, is a 2:04.52. She’s also not too far behind Helm in the 100 fly, and next season will be the team’s 2nd-best 100 backstroker as well (the event in which Helm won a national title in 2018).

Many of those best times, like the 400 IM and 50 free, are a few years old (even though her times have clearly not plateaued overall – her 200 IM has improved by 5.5 seconds in that same period). She currently projects to be a 5-relay swimmer for the Wildcats, plus a 35+ point scorer at the GLIAC Conference Championship meet. Northern Michigan’s women placed 3rd at last year’s meet out of 6 teams – 77 points away from runners-up Grand Valley State and 121.5 points from winners Wayne State.