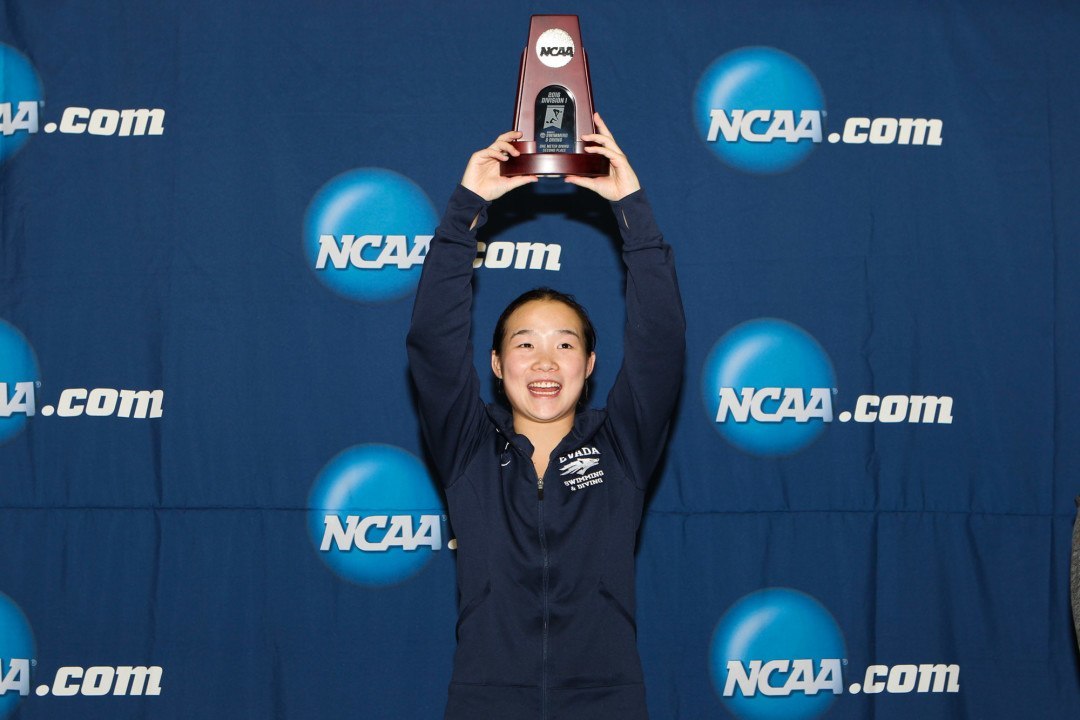 The women’s NCAA Championships kick off later tonight, and the nation’s best divers are chomping at the bit for Thursday morning’s first dive prelims session. Here’s a look at what to watch for in each of the three diving contests:

Nevada’s Sharae Zheng returns to defend the national crown she won as a freshman a year ago. Zheng actually lost this event at Zones to UCLA’s Maria Polyakova, though it’s tough to judge much based on Zones, where divers are essentially vying for qualifying spots and nothing more.

Last year, Zheng topped UCLA’s Eloise Belanger by about 9 points for the win. Belanger returns alongside Polyakova for the Bruins. Only one of the top 8 from 2016 graduated, meaning a full crowd will return with eyes set on toppling Zheng. That group includes Pei Lin of Miami (OH), Julia Vincent out of South Carolina, Olivia Ball of Georgia.

2016 finalist Gracia Leydon-Mahoney of Stanford spent much of the year dealing with injuries and didn’t qualify for NCAAs this year. But Stanford does have senior Kassidy Cook, who was the NCAA runner-up back in 2015, but took a redshirt year last season to make the U.S. Olympic team. Also returning from that 2015 NCAA meet is Minnesota’s Yu Zhou, who was 3rd that year but struggled to a 37th-place finish last year. She won a tough Zone D and should be back in the hunt this season.

Also keep an eye on Kentucky’s Rebecca Hamperian, who just missed the A final last year but was 4th back in 2015 and won Zone C.

Once again it’s Sharae Zheng defending her title for Nevada, but she’s got plenty of company up top. Miami of Ohio’s Pei Lin was second, Maria Polyakova fourth for UCLA and Yu Zhou fifth for Minnesota, and all three of those divers return after winning their respective Zones earlier this month. Polyakova even beat Zheng head-to-head in Zone E. Pei has been the NCAA runner-up for two years in a row in this event, and Yu won it back in 2015.

The other 4 A finalists from a year ago aren’t returning, opening up some room for fresh blood. Kassidy Cook should have a great shot at a high position – she was third in 2015 before her redshirt season. Indiana’s Jessica Parratto is another big hitter in the mix.

While half the A final is gone from last year, the entire B final returns, which should create some strong depth fighting for the last few top 8 slots. Wally Layland and Elissa Dawson dueled for the Zone B title and could both be in the mix, Layland for Miami and Dawson for UNC. Dawson was 9th a year ago. LSU’s Lizzie Cui had a nice meet in Zone D, and watch Zone A champ Meme Sharp of Pitt.

Gracia Leydon-Mahoney is out with injury, opening this event up, but Indiana’s Jessica Parratto returns from a redshirt season and Olympic bid to defend her 2015 NCAA title. She’ll have to battle Big Ten rival Yu Zhou, who was second last year and more than 40 points ahead of every diver but Leydon-Mahoney.

Arizona State’s Mara Aiacoboae looks in great form after winning Zone E. Others returning from the 2016 A final include Olivia Rosendahl of Northwestern (who was second in Zone C to Parratto), Madeline McKernan of Missouri and Jing Leung out of Harvard, who won Zone A’s title.

Nebraska freshman Abigail Knapton looks like an instant-impact rookie after winning Zone C over a very tough field. And Madison Sthamann of Hawaii topped some big names in Zone E for runner-up honors and could be an A final threat.

Is Olivia Ball competing? I was looking through the Zone results, and I thought it said that she had withdrawn her qualification. Hmm, that might change my Top 10 results on the Pick Em if she is.

That solved the questions why I haven’t seen Gracia Leydon-Lahoney dive all year long. Is this injury serious?