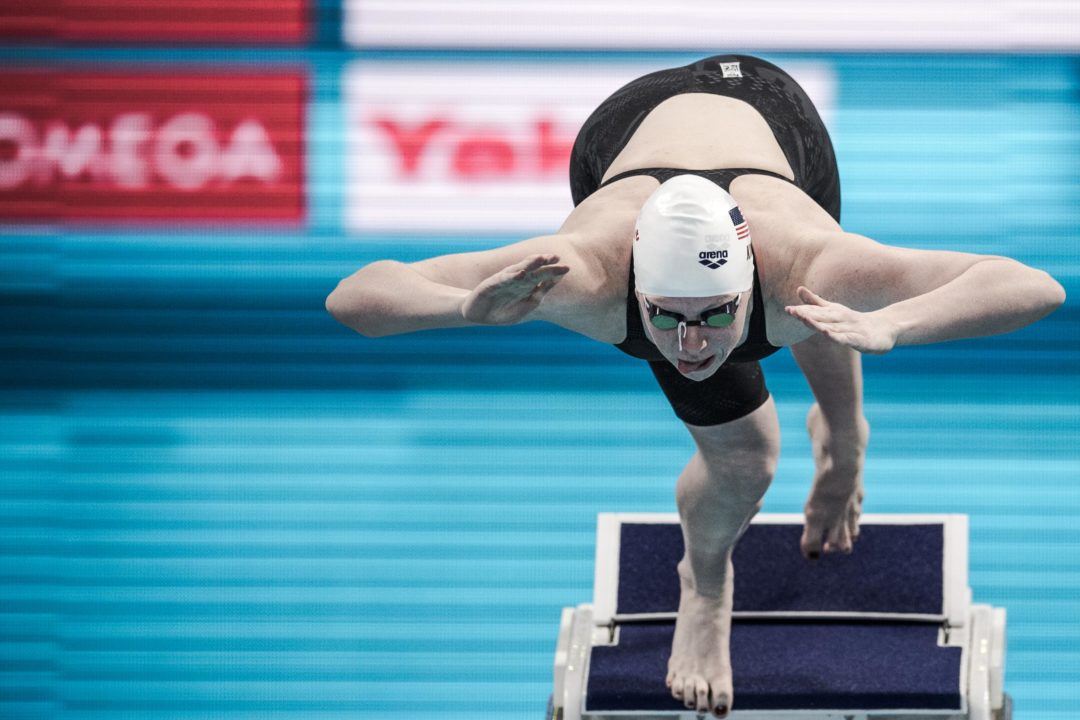 It’s like the return of an old friend for sprint stroke specialists: 2015 marks the return of stroke 50s at the U.S. National Championships.

The 50s of breast, back and fly are only a part of the U.S. National lineup every few seasons, and are offered pretty sparsely in major competition in between. In fact, the 50 breast hasn’t been swum at a U.S. national meet since 2014. That lengthy break can often lead to big breakthroughs in the years the event is offered, with the nation’s top talents finally getting a chance to swim the event tapered and shaved.

The most exciting breakthrough prospect has to be Olympic champion Lilly King, who has the raw speed and power to challenge the world’s best in this event. King’s best time in this event is 30.22 based on the USA Swimming database – but it’s worth noting that that time was done in the opening 50 of her 100 breast, where she would go on to win gold in Rio. Without a second 50 to worry about, it’s very possible King could challenge to become just the third American ever to break 30 seconds in this race.

The current American leader is Molly Hannis, who went 30.19 in Charlotte last month. It’s easy to forget that before Hannis was an Olympian in the 200 long course meter breast, she was perhaps best-known for her short speed in college. Hannis finished her collegiate career for the University of Tennessee with the fastest 50 yard breaststroke relay split in history. That 25.88 still stands as one of the fastest ever, only surpassed by the now-retired Kasey Carlson’s 25.7 and King’s 25.5.

Fellow Olympian Katie Meili should also be in the mix. Meili might be the best all-around American breaststroker, with real potential to qualify for Worlds in the 50, 100 and 200 breasts. She went 30.42 in Charlotte this spring, and led off her Olympic 100 breast in 30.43.

Breeja Larson is the only active American swimmer to ever break 30 in this event, but her 29.95 came back in 2013. More recently, she was 30.56 at a World Cup event in 2015 and has the nation’s fourth-fastest 100 breast time this year. The only other swimmer in American history to break 30 is American record-holder Jessica Hardy, who hasn’t competed since Olympic Trials last summer.

Outside of that fairly well-established group, watch for a group of lesser-known swimmers who look primed for a breakout this summer. Natalie Pierce had a stellar college season with Florida State, dropping two and a half seconds in her 100 yard breaststroke to finish fourth in the nation. She also had the second-fastest 50 yard breast split of the entire NCAA field in the 200 medley. Interestingly enough, USA Swimming’s database doesn’t have any 50 meter breaststroke swims from Pierce since 2012, when a then-16-year-old Pierce went 33.53 at NCSA Juniors. Expect her to blow that time out of the water this summer.

A couple more college standouts to watch: Andee Cottrell of Louisville, Jorie Caneta out of Texas A&M and Lindsey Horejsi of Minnesota had fast 50 breast splits at NCAAs. Cottrell feels like she’s been on the cusp of greatness for awhile now, and put up lifetime-bests in the 100 last summer to make the Olympic Trial final. She finished 5th. Caneta has been improving rapidly. She notched her first 58 in yards this winter and then came within four tenths of her lifetime-best 100 meter breaststroke at an in-season meet in May. Horejsi was a freshman standout, taking second in the 100 yard breast at NCAAs, and she’s also coming off of a lifetime-best 100 meter race last summer.

At the high school level, Nikol Popov has been 31.6 in the long course 50, narrowly missing a Junior World Championships medal in 2015. She’s struggled to drop time recently, but could be in line for a big summer after wrapping up her high school career about a month ago.

Miranda Tucker made the jump from Indiana to Michigan, which left her outside of NCAA competition this year. That might’ve allowed her to spend more time focusing on long course over the summer, though, and she’s already been near lifetime-bests this spring. Texas’s Olivia Anderson is coming off a great summer of 2016, and was almost a medalist in the 50 breast at Junior Worlds in 2013. And don’t sleep on rising NC State talent Kayla Brumbaum or USC speedster Riley Scott though certainly any of these swimmers could take a pass on the 50 to put more focus on the Olympic-distance races.

Dark Horse: Emily Escobedo has been a revelation for UMBC and is coming off an excellent college season in yards, plus lifetime-bests in both the 100 and 200 meter breasts in Santa Clara. Escobedo’s probably best in the 200 breast, so it’s hard to say how much she’ll focus on the 50 this summer. But she’s got a beautiful and powerful stroke that gives her excellent range (much like a Meili), plus outstanding pullouts that can go a long ways in giving her clean water to work with in a sprint. She doesn’t have a 50 meter breaststroke on record since 2008, but could very much be a factor in this heat if she swims it.

Molly went a 30.57 doing breast in the 50 free in her home meet Sunday so add a taper and motivation and she can be pushing 30

I’d love to see a high definition u/ water cam .Not because I think anyone plans to deliberately cheat but yechnicals .

Larson won’t be that slow and I could also see Hannis winning and Meili second.

It’s going to take a lot more than just a 31.8 to make the final/top 8 results. 5-8 are pretty slow. I think those girls will go much faster.

Go Green – that’s certainly possible, but more often than not, we’ve found that the results themselves tend to be slower than the majority of predictions. For example, the last time the 50 breast was included in US Nats (2014), only two women broke 31 seconds, and one is now retired. Just having 2 under 30 and 5 under 31 is a fairly bold prediction compared to historical results.

Breaststroke has become so much faster in recent years and while I see where you are coming from, I stand by what I said. 31.8 is a very slow prediction for top 8.

Hannis will go faster than 30.2 and I’m fairly confident she can beat Meili and maybe King

Not without a pull down.

0
0
Reply
I Love My Fans And Cullen Jones

King will go a 31 because she has never gone a fast time unless she swims against Efimova who didn’t even dope. She made it up so the voices in her head would be like “Lily beat that commie”. Efimova is my best friend so idk why there’s all the hate she would’ve told me

Your friend has no integrity, and should be banned from competing.

8
-14
Reply
I Love My Fans And Cullen Jones
Reply to  Swimmer?

At least I’m not a questioning swimmer. Also how is taking medicine to make you faster “having no integrity” people do it all the time that’s how Phelps got so famous

Even Efimova hasn’t denied either doping allegation. She took a tainted supplement, and she took Meldonium. I will give her props for not denying that. The disputed circumstances from which she took them are what has created the controversy. King never mentioned nationality last summer, her beef was with doping, not with Russia. Efimova was the one who brought up the whole Cold War thing, in order to get sympathy, making a bad situation worse. Time to act like a grown up and take responsibility for her own actions.

Whilst you guys had focused all this energy on Yuliya in July 2016 , meanwhile her compatriots ( so the NYT says) were hacking away at the very core of your electoral system . Having got the candidate they wanted , & retained the Senate & House for their chosen ppl , they now sit back & wait for the US Civil War .

The joke is on you .

There’s actually proof the DNC (Rigged primary against Bernie) and CNN (providing Hillary debate questions) impacted the election where we still don’t have solid evidence that Russia did anything. We suspect they were responsible for the email dump that helped exposed the Democrats, but that’s refuted by Wiki Leaks.

True but how long & how far can this go on? Its past HRC & silly Bernie.
Still I hope for a peaceful dissolution of the US so we can get 4 teams & weaker relays .