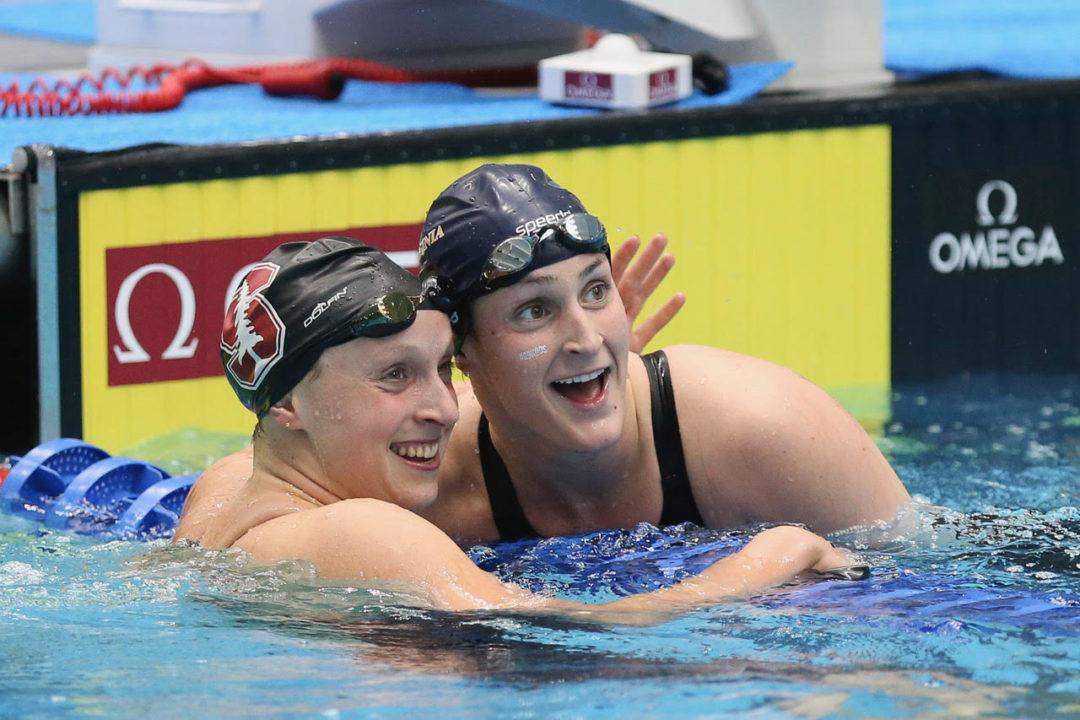 Katie Ledecky and Leah Smith are a dynamic duo who might be the two best 400 freestylers in the world this year. Archive photo via Tim Binning/TheSwimPictures.com

Last year, we thought we’d get another swimmer under four minutes in the 400m free to join Katie Ledecky. Leah Smith, who we thought might achieve that feat, didn’t go faster in Rio than she did at Trials, but her 4:00.65 shows that she’s a couple of tweaks away from breaking that barrier. Smith has become the clear #2 for American distance swimming, in addition to establishing herself as a reliable 4×200 free relay leg, and she’s the easy favorite for 2nd in this race behind Ledecky. Smith certainly has potential to break 4:00, but she hasn’t quite been as fast as last year leading up to Trials. During the 2015-16 season, Smith had three 4:04’s and a 4:03 under her belt, with the 4:03 coming in early June. Her 4:05.62 from the Charlotte UltraSwim is solid, but it doesn’t comfortably indicate a huge swim in Indianapolis.

Meanwhile, it’s clear that her and Ledecky are the true horses in this race. Even if Smith drops little more than a second in Indy, there’s a very good chance she’s still a good couple of seconds ahead of the rest of the field. The same goes for Ledecky, obviously, who probably won’t pull out all the stops in Indy to qualify for Budapest. In a sport full of uncertainty, Ledecky going fast is the closest thing to a given that we can get.

Cierra Runge was the third place finisher at Trials last summer, her 4:07.04 the only other time under 4:08 in the field. She hasn’t been the most predictable swimmer since big years in 2013 and 2014, transferring from Cal to Wisconsin and going up and down with her times. She was strong again in 2016, perhaps showing more sprint to her stroke as she qualified for Rio as a 4×200 free relay leg, but faltered at the 2017 NCAA Championships. This is about long course, though, and she was 4:10.64 in Santa Clara for the 8th-best time by an American this year. She might not be getting third at nationals, but Runge is certainly a solid choice to make top 8 in Indy.

Hali Flickinger, Ashley Twichell, and Melanie Margalis have all been in the 4:08-4:10 range this spring, but the three of them likely will be focusing on other events at Trials. Twichell qualified for Budapest already in the 10K open water, and most OW/pool hybrid swimmers will choose to focus on one or the other for championship season. Margalis has the 100 breast the same session in Indy, and Flickinger typically focuses on the 200 fly and 200 free. Only Twichell swam this at Trials last summer, and since she’ll be focusing on her open water race in Budapest, she could still swim this in Indy but it won’t be tapered.

Katie Drabot, after finishing up her freshman year with Stanford, has found a renewed tenacity in the sport. She hit some plateaus towards the end of her high school career, but has since blown apart her 400 free best time with a 4:08.07 for the #3 time done by an American this year. Kaersten Meitz is also on the rise in this event. The rising Purdue senior and school record holder in the 500 free went a lifetime best 4:37.45 at the 2017 Big Ten Championships, and her 4:09.46 makes her one of only six Americans to have broken 4:10 this year. Both Drabot and Meitz come in with mid-season lifetime bests, and they could have a lot more to drop.

College freshmen-to-be Sierra Schmidt, Courtney Harnish, and Taylor Ault have all been in the 4:11-4:12 range in 2017. All three are right behind their times from last year’s Olympic Trials, where they all finished in the top 24. Collegians Hannah Moore, G Ryan, and Megan Byrnes are also right in the thick of things, also having been in the 4:11-4:12 range this season. Moore made the final in this event at Trials, finishing 7th, and since last year, Byrnes has found significant improvement under the Stanford coaching staff.

Dark horse: Geena Freriks of Kentucky Aquatics. Freriks has been very good this spring, reaching lifetime bests in long course in the 50, 200, 400, and 800 free races. She finished 10th at NCAAs in the 500 free representing Kentucky, and her 4:13.27 from this season is very solid.

I agree with this list. . . mostly. The only person I think I might add is Erica Sullivan. While she definitely is better at the 800, 1500, and OW, she has made consistent and huge strides in this event as well. Based on how she did during the short course season and at OW nationals, I believe she might be sub 4:10. I’m excited to see what she does at the end of the summer since I’m assuming she’ll make Jr Worlds.

Ashley Neidigh will be under 4:10 this summer. She’s already had lifetime bests in the 200, 400, and 800 this season with no rest (4:13 as well). She made significant improvements at this year’s SEC and NCAA championships winning the 1650 at SECs and breaking Auburn’s school record in the 1000 at NCAAs.

In these articles can you include leaks to the other world trial event previews swimswam has written so far?

The easiest event to predict on the women’s side.
And KL doesn’t need at all to swim 3.57 at world trials. 3.59 will be well enough. Behind Smith in 4.01/4.02 there’s no competition before 4.06. She’s the only US swimmer sure to easily qualify in her events even with no rest. For the first time she has to swim the 1500 free to qualify for the event. Her schedule is much harder at worlds than in Rio and she will peak there.

That is a beautiful photo of Smith and Ledecky. Suitable for framing if anyone does such things these days.

To be an Olympian was #1 goal for Leah Smith last season. She was fully tapered and rested at OT. That explains her some (not that huge as in Franklin’s case) slowing down at 200 and 400 in Rio. The OT competition for the second place after Ledeckuy at 200-400-800 was strong. Even to get on 4×200 relay was problematic having Ledecky, Schmitt and Franklin in front of you. The situation this year is quite different. Leah will focus on World Championships and if she is capable of sub 4 min then it will be done in Budapest, not at trials.

Last year smith aimed to peak for trials, not the olympics, which is why her performance at the olynoics wasn’t as good. This uear she is probably aiming for worlds, so expect her to not be as fast in trials but to get a new PB in budapest.

I was thinking of Runge making the team by finishing second behind Ledecky.

If they both swim it, only the winner goes. The other spot goes to the 800 swimmer i think. Katie might not swim 1500 so she can get picked up thru her 800…..i think that is how it works?

Those were the rules for Pan Pac years before the women’s 1500 was added to the Olympics.

Just remember, Runge withdrew from the 800 final at Trials last year due to illness. She made the team while pretty sick. NCAA’s she was also extremely sick having lost 15 pounds in the 2 weeks leading up) so says comments on articles at the time and I watched her coughing badly in the warm up/down pool…legit sick. Hoping to see what a healthy Runge can do. Which events?