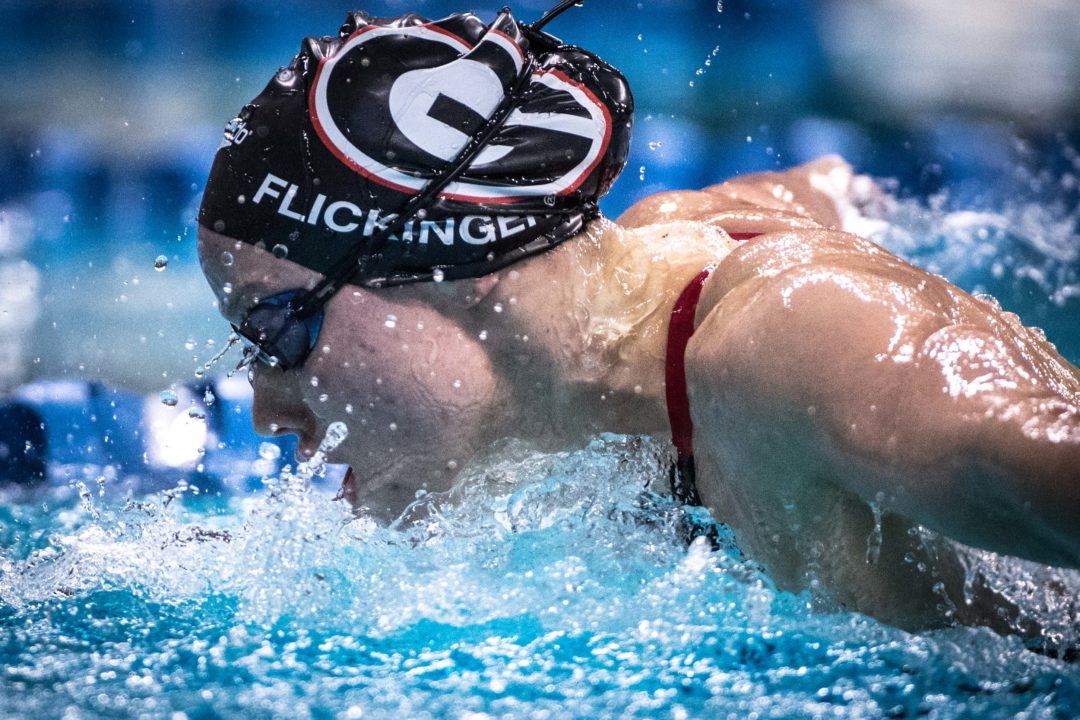 After an appearance in the Olympic final last summer Hali Flickinger is the favorite in the women's 200 fly heading into World Championship Trials. Archive photo via Mike Lewis/Ola Vista Photography

Just as the women’s 100 fly will be missing 2016 Olympic bronze medalist Dana Vollmer, the 200 fly will also be missing last year’s top American in Cammile Adams. Adams has represented the U.S. internationally in this event every year since placing 5th in London, and won a pair of medals over the quad at the 2014 Pan Pacs (gold) and 2015 Worlds (silver). Her absence this year opens up an opportunity for some young up-and-comers to make their first senior national team.

The favorite in this has to be the other American representative last summer in Rio, Hali Flickinger. After posting a personal best in Omaha to make the Olympic team, Flickinger took off nearly a second in the Olympic heats in 2:06.67. She went onto make the final, finishing 7th, and is the fastest American this year at 2:08.77. Given how fast she’s been this year, this pick is all but a slam dunk.

Now the fight for second is a bit more interesting. Last summer Cassidy Bayer was the 3rd fastest American in 2:07.97, and was 3rd in the Trials final, so she’d logically be next in line. However, Kelsi Worrell is one who could easily leapfrog her for that spot.

Worrell is an interesting case in this event. In an interview at the Santa Clara Pro Swim, she mentioned how one of her goals for this summer was to be in more events and more relays (after having just the 100 fly and medley relay prelims in Rio). One would assume that includes the 400 free relay, which she certainly has a shot at being on after making the 100 free final in Omaha. However, the 200 fly and 100 free are back-to-back on day 1 in Indianapolis, which creates a scheduling conflict.

It’s tough to imagine her leaving the 200 fly off her schedule, especially since she’s raced it at four different meets this year and is the 2nd fastest American this season. With the 200 fly being before the 100 free, she could easily give the sprint free event a go in prelims and see if she cracks the A-final. Even without the 400 free relay, the World Championship schedule will likely give her additional swims in the 50 fly and mixed medley relay. And of course there’s always the chance she impresses the coaches enough to give her a prelim relay spot come Budapest.

Her performance in Omaha wasn’t indicative of her 200 fly abilities, as it came shortly after the 100 free semi. Her best came at the 2015 Nationals, where she went 2:08.61, and given that she’s been 2:09.4 or better three times this season, we could see a massive drop. This event being the first event on the first day should heighten our time expectations a little bit for everyone.

The 4th fastest American this year is Katie McLaughlin, who actually owns the 2nd fastest PB in the field at 2:06.95. After dealing with injury in 2016, she has performed well so far this year and has already equalled her fastest time from last year (done at Olympic Trials) this year in-season at 2:10.35. She’s in good position to get down into the 2:08 range, but may need to approach her best time to vie for a spot on the team.

Behind those four, there are four others who have been 2:10 this season.

Lauren Case and Maddie Wright are tied for 5th among Americans at 2:10.50, and could easily slip under 2:10 in Indianapolis. Case went 2:10.36 at the Olympic Trials, and having gone sub-2:11 in all three of her long course meets this season, look for a nice drop from her. Wright dropped time in this event for the first time since 2013 at the Speedo Grand Challenge, so it will be interesting to see if she can take off much more.

Hannah Saiz sits 7th among Americans this year, and was one of the few to crack 2:10 last summer with her 2:09.61 at the U.S. Open. Taylor Pike has been hovering around the 2:10-high area for the last two years, and is young enough that we could see a nice drop.

And then there’s Ruby Martin, the teenager from Iowa who surprised everyone last summer with her 4th place finish in the Olympic Trials final. Coming off that 2:09.9 breakthrough, Martin looked solid at the Atlanta Pro Swim in 2:11.1 and looks poised to be back under 2:10 again.

There are a few others right there who could sneak into the A-final: Ella Eastin, Dakota Luther and Remedy Rule have all been 2:11 this year, and will look to make some noise after being non-factors in this event in Omaha. Eastin didn’t even swim the event, while Luther just missed the semis in 17th, and Rule was well off the pace in 53rd.

Update: Upon release of the psych sheets on June 23rd it was revealed Kelsi Worrell was not entering the 200 fly, instead focusing on the 100 free on day 1. This moves Cassidy Bayer into the 2nd spot and Maddie Wright into the top-8 in our predictions.

Darkhorse: Coming off her freshman year with Michigan Vanessa Krause has unloaded the three fastest 200 flys of her career, going as low as 2:11.33 in early June. If she hits her taper, a sub-2:10 isn’t out of the question.

I Really think Remedy Rule is getting underestimated after her incredible 200 Fly at NCAAs this year. She was DQed but still pulled off a 1:52

You guys are underestimating Katie McLaughlin !!!

I’d like to think Bayer will be on her A game for this meet…. In her interviews she seems to be happy with her swims (Arena Pro Series) but looking at the bigger picture and the ultimate endgame (World Trials). I think a full taper will definitely give her the edge over Worrell.

She misssed a lot of training for surgery last fall…. as a teenager she could be full of surprises but I think she’s a season away from making a big drop. Katie McLaughlin is a big wildcard; before her injury she was on the cusp of seriously competing for a medal but now, it’s anyone’s guess. This really is one of the weaker events, in the U.S. and worldwide. Wide-open for someone to take control.

Sarah Gibson deserves a mention in this

I sometimes wonder if Kelsi might be faster on the 200 if she breathed more, especially with the amount of time she spends underwater on the turns. She breathes every other stroke for the whole race. I guess she just feels it messes up her rhythm.

Agreed. Maybe 2 up 1 down on the first 100 would keep her more oxygenated for the back half of her race where she could switch back to every other.

In 1981 a young American lady swam 2.05.96. Almost 36 years later that time looks really unattainable for all of these girls.

Don’t compain too much about the 2:05:96 that is unattainable 36 years later. It will be nothing compared to how unattainable katie ledecky,s records especially her 8:04 800 free will be.

I say ledecky,s 8:04 world record will last at least 200 years unless she breaks it in Budapest.

Haven’t we said that a lot through history? 10s over 800m is big, but I wouldn’t be surprised to see a non-Ledecky woman under 8mins in my lifetime. Same with Phelps’ records, Peaty’s, Cielo’s 50 that looks a long way away, Zige’s 200fly – They’ll all go in my lifetime. I remember grumbles that Steffen’s 50fr would take decades as recently as 2012/13. It’s surviving by the skin of its teeth now. Sport is ever evolving, sometimes an athlete is ahead of their time, but by no more than a few generations.

I doubt that a non ledecky woman will go under 8 minutes. I seriously don’t think her 8:04 will be broken by anyone other than herself.

Marita koch who holds the women,s 400 meters record in track has a time of 47.60. The record has stood since 1985 and no woman has been nowhere near that time since.
Then you talk of Florence griffith joyner,s world records. These two have forever records that the best women in the world have not come anything close to.

I don’t think Ms Ledecky would appreciate being likened to either of those athletes.

I would consider swimmers of different generations if the difference in age is more than 5-7 years. Regarding Ledecky we just don’t have appropriate scale to measure what she has done. We like small children that can count: ‘one’, ‘two’, ‘three’ and then ‘many’. 10 or 100 – doesn’t matter. ‘Many’ and that’s it. 29 years ago (4-5 generations back on my scale) Janet Evans set the standard that since that time only one swimmer could barely surpass. With this time she could still medal at any competition of any level. That is how extraordinary good it is compare to the general field on the span of 30 years. And that is a half pool length back behind Katie Ledecky.

Yes, but you now have a pack around Evans (Friis, Kapas, Adlington, Carlin) all around her textile – Boyle & Belmonte at PB shape were in the realm. So, using your own example, hive it 30 years and you’ll have a pack of swimmers 8.04-8.08… You’ll usually have a break out, an outlier, too.

I’d put money down confidently that a woman not named Ledecky will be under 8mins by 2040.

I can’t bet with you. I won’t be able to collect your money. 2040 is well beyond my life expectancy 🙁

Cassidy Bayer doesn’t like your predictions. Another cruel 3rd place after olympic trials last year! 😥 I hope that scenario will not happen again!
One of the most open events in US women’s swimming right now with the 400 IM and the 200 back. But also one of the weakest events of the moment with no serious medal contender at the world level. Katie McLaughlin seemed to be on that medal track in 2015 but unfortunately an injury has stopped her progression. Since then she struggles to come back at her best level. But her recent performances are promising. Ruby Martin was the surprise of last year. Can she drop 2 seconds in Indianapolis?
Hali Flickinger looks solid… Read more »

I really think Katie McLaughlin has a better shot of making the team than Kelsi and/or Cassidy. She’s definitely a meters swimmer and has a great backhalf.

i think she has a legit shot also, but her back half hasn’t been there this summer.