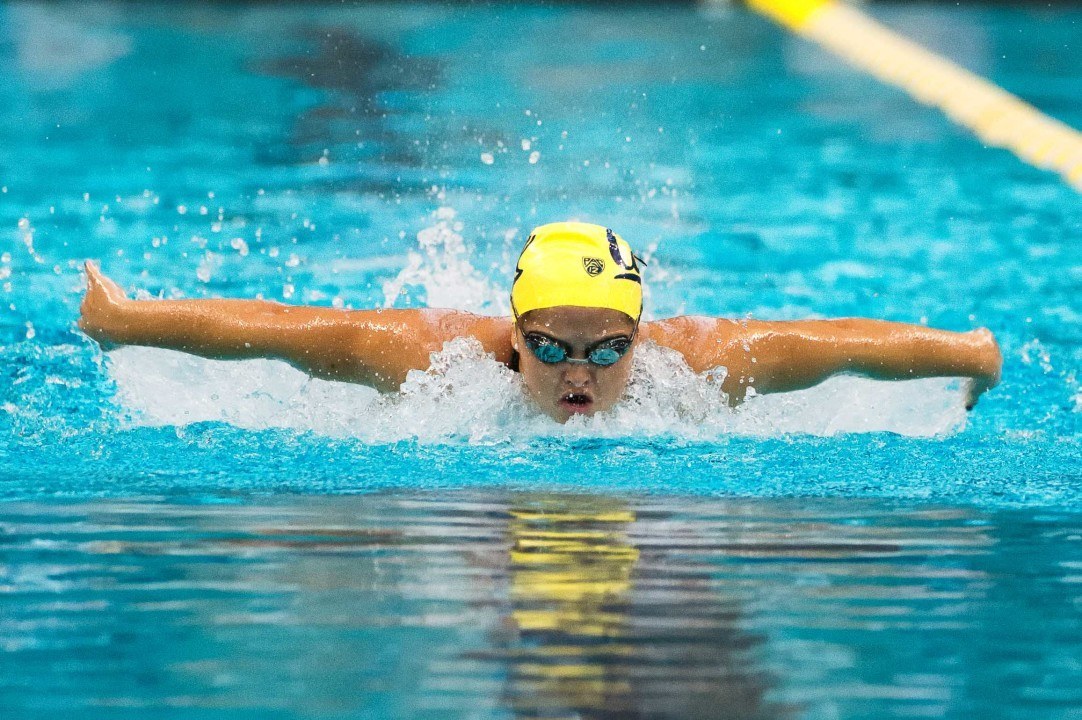 Highly-touted Cal freshman and U.S. National Teamer Katie McLaughlin will not swim at the Arena Pro Swim Series at Austin the weekend due to a neck injury she suffered on the team's training trip. Archive photo via Mike Lewis/Ola Vista Photography

Highly-touted Cal freshman and U.S. National Teamer Katie McLaughlin will not swim at the Arena Pro Swim Series at Austin the weekend due to a neck injury she suffered on the team’s training trip.

McLaughlin, who was a part of the U.S. World Championships team last summer, injured her neck in Hawaii, where the California collegiate team has been training between academic semesters.

Maybe the bigger story, though, is that McLaughlin is set to be a key contributor to Cal’s NCAA title defense. The Golden Bears graduated mega-star Missy Franklin after winning last year’s collegiate title, but brought in a stellar freshman class to reload, with McLaughlin central in that recruiting effort.

The California athletics department released a statement announcing McLaughlin’s scratch from the meet, noting that she has been cleared to train both in and out of the water and expressing optimism at getting McLaughlin back at full strength in competition:

Cal freshman Katie McLaughlin sustained a neck injury during the team’s recent training trip to Hawaii. She is cleared to continue modified training both in the water and on dry land during recovery, however will be held out of competition until the injury has healed. Katie will be evaluated by Cal’s medical staff on a regular basis and is expected to make a full recovery.

What does it take for Cal’s program to get your respect, a male coach? Four national titles in the past seven years and several Olympic gold medalists not impressive enough?

My comment had literally nothing to do with a male coach. All I know is Rachel Bootsma, Elizabeth Pelton, and Missy Franklin came to Cal with tons of potential and have remained flat or gotten slower. I fear the same thing will happen to Katie (and also Kathleen, although I wasn’t so sure about her Olympic potential).

Look, I’m considered about the Cal injury bug, too, and wish the young women would swim faster. But to be fair, that plateu effect isn’t unique to Cal. There were 24 women on the U.S. Olympic team pool roster. I’m pretty sure only one of them (Ledecky) got significantly faster since then. So, if my calculations are correct 23 of 24 “have remained flat or gotten slower.” And only a few of them attended Cal (or, as commonly interepreted here, Teri McKeever only ruined a few of them). It looks like it’s as much about timing (Olympic cycle) as anything else. Cal attracts Olympians/potential Olympians. They’re going to have post-Olympic blahs like Schmitt, Phelps, and everyone else not named Ledecky.

I don’t know whether the original comment was fair or not, but it’s wrong to pull the gender card just because of a negative comment. We’re allowed to have a debate here, so long as Swimswam allows it.

Seems like everyone at CAL gets some sort of injury.. Who’s their dryland/ weight training coach? That might be the real problem. Good luck Katie on your recovery rooting for you!

Time for ms. McLaughlin to choose between Cal and going to Rio. Cal will always be there. Maybe time to redshirt or return to former coach for a saner training environment.