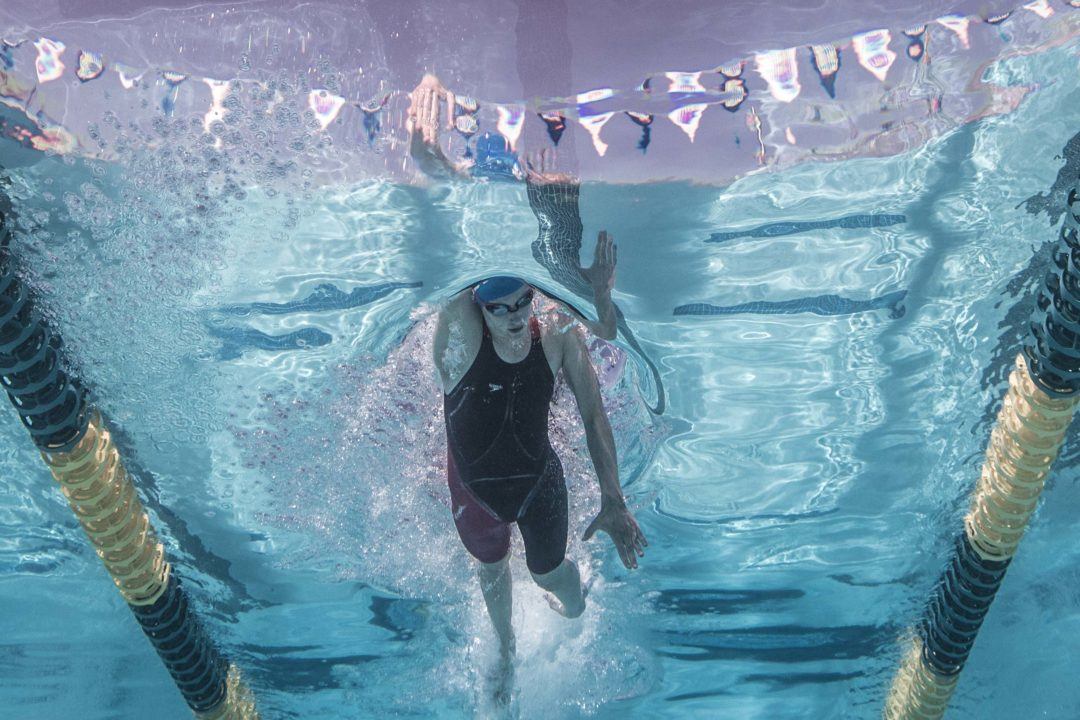 Starting an hour after the east championships in Knoxville, the 2017 Speedo Winter Junior Championships – West in Iowa City also began on Wednesday with the 200 medley and 800 free relays. With a wide-reaching field that spans into Texas and all the way west to swimming hot spots in California and Colorado, the west championships have a very diverse field.

And after a brief stint in possession of the Kentuckians, the relay is back in the hands of the same quartet that broke it last year.  Bayley Stewart, Zoe Bartel, Coleen Gillilan, and Kylee Alons combined for a 1:37.65, which besides breaking the Meet Record also breaks their own 15-18 National Age Group Record (Cardinal Aquatics had a 14-year old on the relay, and so wasn’t eligible to break that record). Fort Collins’ group set that record once at last year’s Winter Juniors, and then shaved another .01 seconds off it.

A comparison of last season’s splits to this season’s:

Scottsdale Aquatic Club took 2nd place in 1:40.07, which is two-and-a-half seconds back. Claire Grover split 27.08 on the breaststroke leg for Scottsdale, matching Bartel’s split from the winning group.

In a quirk of timing, the winning Magnolia Aquatic Club relay of Lucie Nordmann, Monica Gumina, Kaitlynn Sims, and Lillie Nordmann appeared to have broken the Short Course Juniors combined record in the women’s 800 free relay, but the Nashville Aquatic Club relay out east beat them to the punch (and the wall, virtually, by .06 seconds).

In another quirk, though, the Magnolia Aquatic Club still gets a big record, in spite of only being the second-fastest relay of the night: the 15-18 National Age Group Record.

Because Nashville’s relay included 14-year old Gretchen Walsh, they weren’t eligible for any National Age Group Record. Instead, it’s the Magnolia Aquatic Club who get the mark by a veritable mile. They were almost 2 seconds faster than the old record of 7:07.82 that was set by SwimMAC Carolina in 2014 – a relay that included the 2017 NCAA Swimmer of the Year Kathleen Baker.

The relay’s fastest split was its anchor, Lillie Nordmann, in 1:45.19 – the second-best split of the two meets combined. The two Nordmann sisters, including the elder Lucie on the leadoff, had the fastest two splits of the west meet, in fact.

The Austin Swim Club relay of Luther, Ella Collins, Diana Dunn, and Kendall Shields combined for a 7:07.59, which is also faster than the Juniors – West and overall juniors records were coming into the day.L

The North Texas Nadadores may have a new coach, but they’ve still got a lethal freestyle group – the same one that produced current Texas Longhorns Brett Ringgold and Jonathan Roberts in prior iterations. On Thursday, the group of Jack Levant, David Hallaron, Logan Davis, and Kevin Repice combined for a 6:32.60, which gave the Nadadores the win ahead of a 6:33.26 from Irvine Novaquatics. KATY Aquatics was well back in 3rd place in 6:40.13.

The field was a little lackluster for this race. Levant lead off the winning relay in 1:34.53, and not only was that the fastest split, it was the only split better than a 1:37.19 (Alexander Zettle from Lakeside Aquatic Club). By comparison, the east meet had two swimmers lead off in 1:33s, and had 11 swimmers under 1:37.

Zettle is from Lakeside Aquatic Club not team.

Kylee Alons from FAST warmed up for this by doing a 500 in a HS meet last week in 5:24… backstroke… at 5000′ altitude….in a shallow pool with narrow lanes. Saw it with my own eyes.

Woah. Have any results or video of that you can send??

I don’t have video, but I can find the splits, but I didn’t film the race. I will have plenty of chances to get video this season. I set up the pool and run timing for the home duals and the state meet.

MM had Alexis Depaco from Crow Canyon Country Club At 21.96 on fly….any confirmation on the validity of this split?

Her fastest 100yard fly is 56.28, and the breaststroke split seems slow, so my hunch is that this is a timing error. Can’t confirm though.