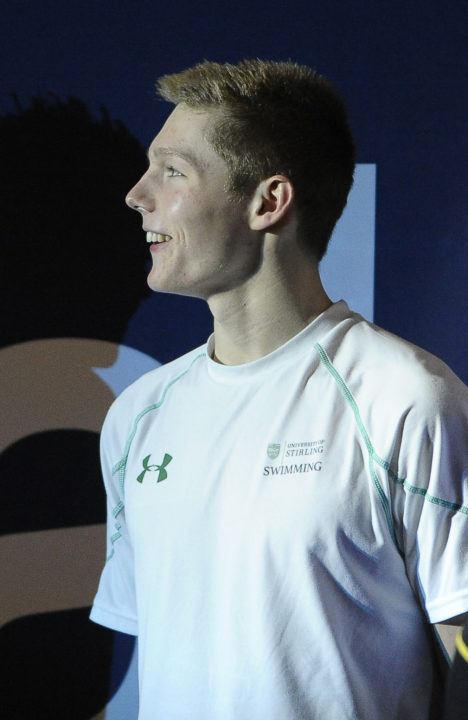 Yesterday’s 50m butterfly winner, Charlotte Atkinson of Loughborough, is trying to double up on the discipline today, scoring the top seed with a morning mark of 2:09.92. Atkinson suffered a disqualification in this event at the 2016 edition of the meet, so the athlete is trying to avenge that outcome with a possible Budapest berth here.

It’s going to take at least a 2:07.98 to be considered for the roster spot, so Atkinson will need to drop almost 2 seconds from her prelim swim to the final. Considering her AM effort was already .01 below her personal best ever of 2:09.93 earned just this past February at BUCS long course, the 21-year-old is off to a good start.

As is 16-year-old Emily Large from Newcastle. The young talent won the Junior final of the women’s 50m butterfly yesterday, but her stroke is better suited for this longer event. She already holds the British age record for 15-year-olds by way of her scorching 2:08.87 outing that garnered a gold at last year’s European Championships.

Last year’s victor, Aimee Willmott, opted out of this event, but the 2016 silver medalist is fully engaged in the 200m butterfly battle. Swansea’s Alys Thomas is positioned as the #2 seed behind Atkinson, carrying a solid time of 2:10.10, just .18 off of the Loughborough leader.

Last year’s men’s 100m freestyle final saw 6 sub-50 second men, while this year’s prelims already collected 5 marks in that arena. The field is led by 2016 Olympic finalist in this event, 19-year-old Duncan Scott, who cranked out a swift 48.58 as one of 2 marks under the 49-second threshold. He now ranks as the 9th fastest swimmer in the world this season.

Scott, who trains alongside the likes of breaststroke Ross Murdoch and IMer Dan Wallace at the University of Stirling, shocked the world by not only qualifying for the men’s final in tis event at the 2016 Olympic Games, but by placing a remarkable 5th. In that stacked race, Scott held his own, registering a personal best of 48.01 to establish a shiny new British National Record. The teen has already proven his 48-point status wasn’t a fluke, touching in 48.75 untapered at the Luxembourg Euro Meet earlier this year. Scott earned a bronze last night in the men’s 200m butterfly, touching in a personal best by almost 2 full seconds.

Also in the hunt here in Sheffield, however, is last year’s bronze medalist Adam Barrett of Loughborough. Barrett touched in 48.94, a new career fastest. Last year Barrett scored a 48.98 in prelims, but bettered that time already this morning. However, unlike Scott, it would be a big stretch for Barrett to dip from a new personal best of 48.94 all the way to the British consideration standard of 48.33. But, then again, the Jocelyn Ulyett party-crashing swim in the women’s 200m breaststroke from last night can add a shade of doubt to conventional time drops.

Last year’s silver medalist in this event, Benjamin Proud, now of Energy Standard, wound up in a disappointing 13th with a time of 50.50. He’s still slated to race the 50m freestyle and 50m butterfly.

Note that two athletes tied for the 8th slot in the form of Jarvis Parkinson and Yusuke Legard, forcing a swim-off later this morning.

The full effect of 2016 Olympic 4th place finisher Fran Halsall‘s retirement is continuing to be realized, as no woman notched a sub-25 second mark in this morning’s prelims. Last year Halsall was the only sub-25 swimmer in even the final, taking domestic gold in a mark of 24.48. With the British consideration standard resting at 24.56, women will need to drop upwards of over a second to be in the ballpark.

But seasoned racer and 200m IM Olympic silver medalist Siobhan-Marie O’Connor is giving the race her best shot, clocking a 25.32 to claim this morning’s top seed. Her outing today is a personal best by about a tenth, but she’ll need to have a swim of a lifetime tonight.

As will 2016 silver medalist at this meet Anna Hopkin last year’s Target Tokyo final winner Lucy Hope, who touched in 25.37 and 25.78 for the 2nd and 3rd seeds, respectively.

Of note, on-fire junior swimmer Freya Anderson finished in 9th overall with a time of 25.98 to represent the 4th time the 16-year-old has earned a time under the 26-second threshold.

As a testament to the host locale’s training program, the top 3 400m IMers headed into tonight’s final all stem from City of Sheffield, led by 22-year-old Max Litchfield. The 2016 World Short Course silver medalist holds his nation’s fastest mark in the SCM version of this event and has already said this year that he is gunning for a time under the 4:10 threshold. He established himself as the top seed of the morning with a stand alone 4:16.25, not far off his 4:15.84 from the Arena Pro Swim in Indianapolis last month.

He’s joined by training partners and brother Joe Litchfield and Richard Nagy, who themselves were just separated by .10 of a second. Nagy holds the 2nd seed in 4:19.05 to Joe’s 4:19.15 to represent the ony other swimmers under the 4:20 mark. For younger Litchfield, he smoked his previous personal best of 4:22.51 from last year.

Last year’s bronze medalist Dan Wallace opted out of this event this time around.

I totally agree – expected more. Hopefully he was just warming up for the 50 later this week!

Yeah it wasn’t a good swim from him. Maybe he’s just concentrating on the 50s this year, but 50.5 is nearly two seconds slower than last year. Re qualification. Scott looked easy for his 48.58 and I’d be surprised if he doesn’t at least get the consideration time. The actual QT requires a British record, which is possible, but might depend on how close he is to optimum form. Litchfield also looked like he had plenty to spare, and again would expect him to get the CT comfortably and maybe push the QT. Don’t think any of the women’s 50 free swimmers will get particularly close. 200 fly a tough ask, but Atkinson is in great form so could push… Read more »

I think Dan Jarvis has a pretty good chance of the upset – Tom Derbyshire will be right on the cusp of breaking 15mins too.

Under James Gibson – I’m wondering if this move is a Halsall? Of course Gibson had her target the 50, improving massively, while her 100 went into decline. Also have the possibility of not a full taper? He is 21.74 already this year and his consideration time is 22.01.

On the 100 note again – Nice to see a swimmer I’ve touted for a few years, Lewis Burras (2000), making a nice time drop to 50.08. His start is diabolical, but he has the time to sort it at his age and one he gets into his stroke he can go some. Can’t wait to see his progress towards Tokyo.

Overall quite disappointing swims so far for us British swimming fans with a few exceptions. However, quietly excited for the men’s 100 free. the swims from Scott and Jarvis bode well for their 200 as does Barrett’s for his 100 fly! With these guys and Peaty I feel Chris WH has to be selected for the 4x100Medley Relay no?

GB men have a serious backstroke problem in the 4 x 100 medley. ?

Men’s 100 free is truly on renaissance period. Budapest final may even be faster than Rio final.
Here’s my predictions for the final line up;
McEvoy, Chalmers, Scott, Morozov, Dressel, Adrian, Timmers, and either one of Schooling/Nakamura/Dotto/Stravius/Zetao.

Many sprinters were caught off-guard in Rio prelims, it was incredibly fast that Adrian was just 0.03 seconds from being eliminated. I don’t think Budapest prelims will match Rio prelims, but the final will be at least as fast or even faster. I am positive McEvoy, Chalmers, and Dressel will be faster than their Rio times.

Metella failing? Are you a firm believer in French nerves?

I don’t know what you are trying to say exactly. I didn’t even mention Metella. He could get selected to swim in individual 100 free, but he may end up as one of either Schooling/Nakamura/Dotto/Stravius/Zetao to final. I chose Stravius to represent France as he was among those caught off-guard during the prelims and just 0.04 seconds off from getting a berth in the semis and he split 47.11 in the free relay. Metella is younger and has more upside, but Stravius has also been focusing on freestyle in expense of his backstroke, so all in all (looking at their fastest times and upside potential), they are both equal. I will be surprised but not shocked if both make it… Read more »

I think Chalmers, McEvoy, Adrian and Dressel are a lock. I am also pretty confident about Scott. The other spots should be between the 2 french (whoever that will be), Morozov, Izotov, Nakamura, Le Clos (if he swims it), Schooling, Dotto, maybe Timmers, maybe Zetao and hopefully Wierling.

I wouldn’t count on Izotov.
All of his top 8 fastest times were done in domestic/national competitions. That’s…. Unusual.

And even if he qualifies to represent Russia, his PB may not even carry him to the final.