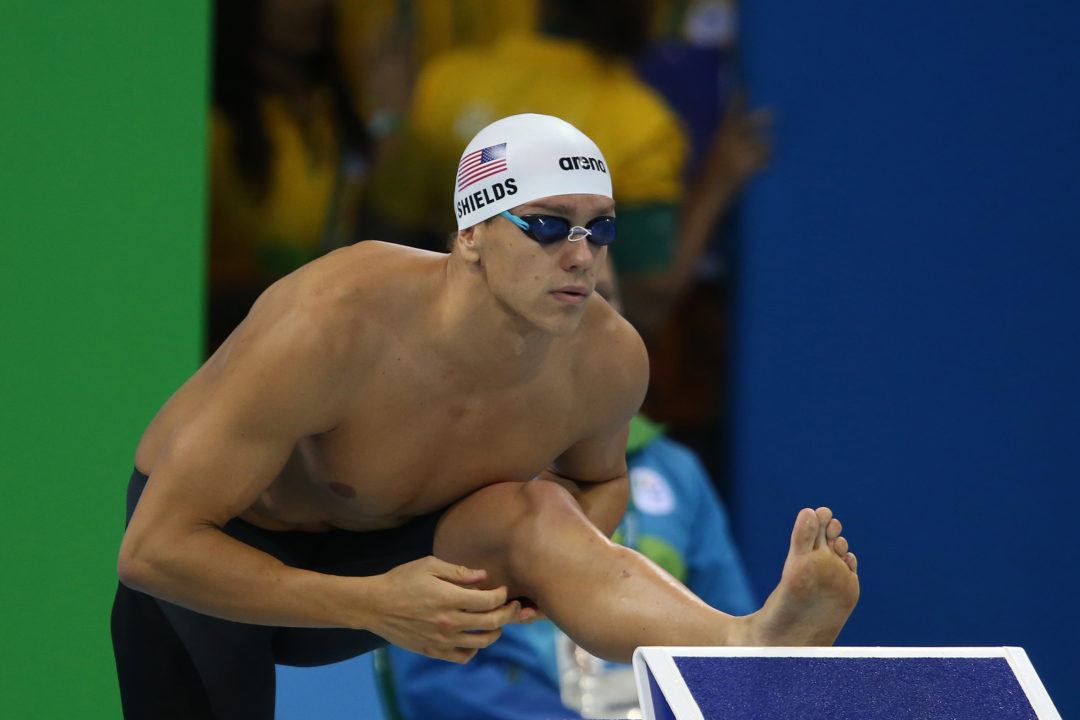 On night 3 of the 2016 U.S. Winter Nationals, U.S. Olympian Tom Shields made history with the first ever sub-44 time in the 100 yard butterfly.

With the 2016 U.S. Winter Nationals now complete, the winning teams in the points battles have been named.

Indiana’s Vini Lanza posted NCAA ‘A’ cuts in both butterfly records over the weekend.

The third day of the 2016 U.S. Winter National Championships was the most exciting yet, and we’ve got all the A and B finals race videos here for you.

In a race that featured last year’s NCAA 2nd and 6th place finsihers, it was 16 year-old Emma Muzzy of the Virginia Gators who took this race out fast, jumping out to a lead at the 50, and holding it through at least the 175.  Minnesota’s Brooke Zeiger took the lead at the 200 mark.  Zeiger built her lead throughout the breaststroke leg, splitting 1:08.27 as she lookedstrong all the way.  That gave her a two second lead over OSU’s Lindsay Clary and Muzzy, and Zeigler easily maintained that lead throughout the final leg, touching in 4:02.71.   Clary finished 1-2, followed by another Buckeye, Meg Bailey.

In contrast to the women’s race, here it was the eldest in the group, 27 year-old Omar Pinzon, who had the early lead, as he went out in 51.31, and continued to set the pace through the 150 mark.  Nate Carr and Sean Grieshop closed on Pinzon over the next few lengths, and all three swimmers were within a few tenths of each other halfway through the breaststroke leg.  Grieshop began to ratchet it up from there — he outsplit Carr and Pinzon in the second 50 of the breaststroke leg, and then really turned on the nitro in the freestyle, including a 24.73 final lap to win in 3:44.69.

Grieshop is the junior world record holder in the long course version of the event.  Tonight, he was just off his personal best, and should continue to develop under Cal’s Dave Durden over the next four years.

There aren’t a ton of Olympians at this meet, but the ones who are here have been looking like it.  I wrote that sentence in the middle of this race, and Tom Shields definitely proved that to be true, blowing away the American and US Open records in 43.84.

The Indiana men have been looking so far at this meet, and Vini Lanza continued the Hoosier’s roll with a 45.56, a time that’s good enough to put him in the A final at NCAA’s, where he finished 11th last year.  Minnesota’s Daryl Turner finished 3rd in 46.53.

Last night, Amanda Weir reminded us she can sprint.  Tonight, she showed us she’s no slouch at middle-distance either in short course.  Weir, as you might expect from a sprinter, went out hard and led through the first 100, but didn’t end up with the win.  That went to fellow 2016 Olympian Melanie Margalis, who earned a gold medal last year as part of the 4×200 free relay in Rio.  Margalis held off Weir and 16 year-old Isabel Ivey to take her second national championship of the meet in a time of 1:43.72, after winning the 200 IM Thursday night.  All three of the top swimmers swam personal bests tonight, and Ivey’s swim now ranks her 4th all-time in the 15-16 age group.

In the opposite of the women’s event, it was a distance swimmer who went out first.  Last night’s 500 free champion Marwan el Kamash (Indiana) touched first at the 50, but Florida freshman Maxime Rooney quickly took over the lead and maintained it to the end, winning in 1:33.85.  UNC’s Jordan Merilees had the fastest backhalf of the race, splitting each of the final two 50s in under 24 seconds, and touched 2nd in 1:34.41.  Anze Tavcar rounded out the top three, while fellow Hoosiers Jackson Miller and el Kamash took the next two spots.

There aren’t a ton of swimmers who are elite in both the 200 free and 100 breast, but tonight Melanie Margalis has won national championships in both.  Breeja Larson went out first, but Margalis closed on her over the final few strokes to take the win, 58.09 to 58.21.  Miranda Tucker, last year’s 3rd place finisher at NCAA’s took 3rd tonight as well, touching in 58.95.

The USA Olympians continue their run tonight, at American Record holder Kevin Cordes got back into racing tonight with a 51.88 a week before he swims at short course worlds.  Cordes was almost two seconds off his American Record time of 50.04, but still almost a second ahead of the 2nd-place finisher, Indiana’s Ian Finnerty (52.68). Rostyslav Fedyna, who attends Queens, but is swimming officially unattached, took 3rd in 53.21.

No Olympians in this race, but we stil had plenty of excitement.  Indiana’s Marie Chamberlain was out first at the 50, but the field closed in on her the second lap, and the entire middle of the pool appeared to be in the mix halfway down the final length.  Kentucky’s Bridgette Alexander got her hand on the wall first in 52.53, just ahead of UNC’s Caroline Baldwin (52.70).  Ally Rockett touched 3rd in 52.91, while her teammate Chamberlain ended up 4th.

An hour and 15 minutes after swimming the fastest 100 yard fly in history, Tom Shields doubled up to win the 100 back in 45.11.  Indiana’s Bob Glover was out first at the 50, but Shield was close behind, and used his powerhouse underwaters to propel himself over the back half to victory.  International veteran Arkady Vyatchanin took 2nd in 45.89.  Grand Canyon’s Mark Nikolaev has the second fastest back half of the field and finished 3rd in 45.92.

As expected very close women’s 200 free. Isabel Ivey destroyed her PB. Before that meet it was 1.46.88 from December last year. She swam 1.45.43 in prelims yesterday after a 400 IM. Smartly she scratched the 400 IM final to focus on her best event and almost beat Melanie Margalis in 1.43.96. Nothing surprising after swimming 1.58.94 in long course last summer. And she only turned 16 last month. She’s now the 4th fastest 15/16 US girl ever in that event in SCY. A name to remember!

Monster 100 fly by the monster bathtub swimmer Tom Shields in 43.84! He sent a message to Le Clos before next week’s SCM world championships. Schooling has a target time for next NCAA… Read more »

Tom. Shields. First of all, two national titles in one session is already impressive enough, but then fastest EVER 100 fly and a 45.11 in 100 back when he isn’t even a backstroker! I said it before and I’ll say it again… Tom Shields is a short course beast

Monster 100 fly
He swims 45.11 on backstroke especially thanks to his monster underwaters.
Clearly a bathtub monster
Ryan Hoffer is gonna take over from him in the next decade for the title of best bathtub US male swimmer. And he goes to Cal like Shields before.

NEVER BEEN SO AMPED ABOUT A 100 FLY BEFORE.

Beefy T is looking great heading into Worlds, you begin to wonder if he can make a run at the 50 and 100 fly WR’s

I think if he works at his starts and continues this way in the water, he really has a shot at it.

With that kind of shape he’s able to beat Le Clos and take both golds. It will be close.