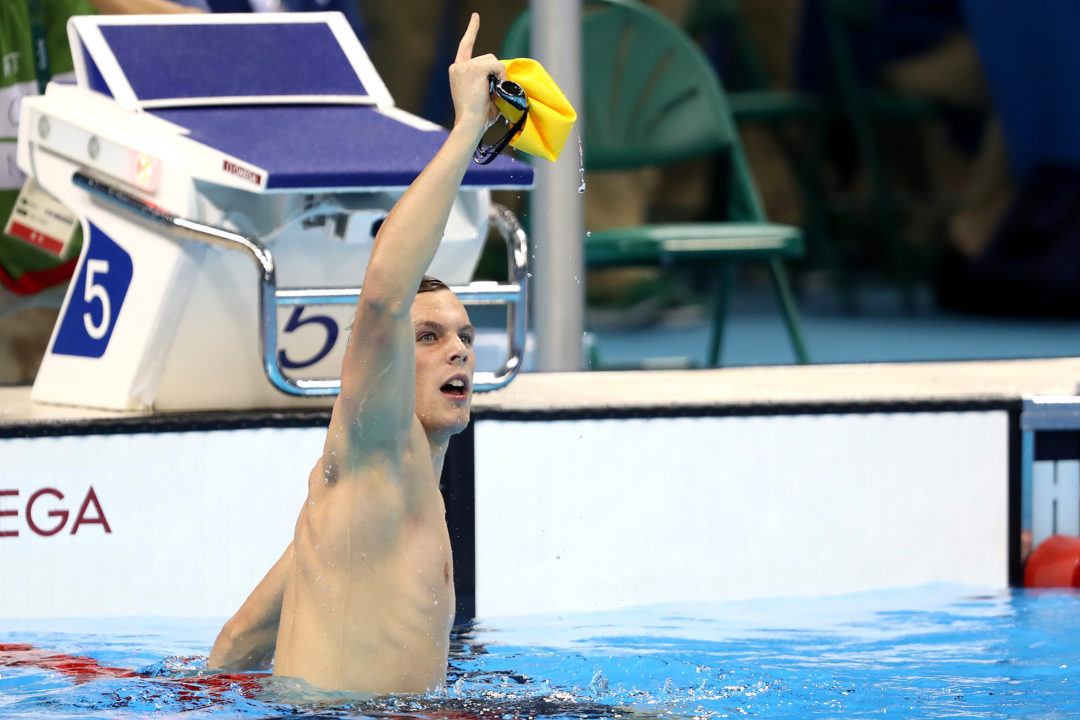 Youngster Kyle Chalmers would make his mark when his older teammates could not deliver, striking at just the right time in the men's 100 free final at the 2016 Olympics. Archive photo via Simone Castrovillari

In Rio, as James Magnussen was unable to return to 2012 form and Cameron McEvoy failed to follow up his textile world record of 47.04 from April, the Australians were left scrambling for a new sprint force– but not for long.

Youngster Kyle Chalmers would make his mark when his older teammates could not deliver, striking at just the right time in the men’s 100 free final at the 2016 Olympics. The 100 free was a big upset race on the men’s and women’s side, and Chalmers put the hammer down to take a surprise gold in the men’s race. It wasn’t early speed that drove Chalmers to the wall ahead of the rest of the field; he was actually 7th at the turn at 23.14. However, he had the fastest back-half of the race (24.44), as only two other men came back under 25 seconds. Chalmers’ surge to the wall earned him the gold, one of only five individual medals for the entire Australian team in Rio, along with a new world junior record.

Additionally, Chalmers was essential on relays. He had the 2nd-fastest Aussie split on their 400 free relay, and threw down a 46.72 anchor leg on their 400 medley relay, the fastest anchor in the field. Both relays earned bronze medals. Chalmers also broke the 100 free world junior record in SCM this October to add to his achievements on the year. He was named Australia’s Olympic Swimmer of the Year this November.

Much like Chalmers, Duncan Scott is a young sprinter who broke out on the international stage this year. In the 100 free final in Rio, Scott placed 5th, matching his prelims time of 48.01 which was a new British record. Scott erased an eight-year-old mark set by Simon Burnett in 2008, and signifies new life in the British sprinting corps. Not known for their sprint free, the Brits nonetheless have a fast-improving young name to watch going forward in the new Olympic cycle. Scott anchored their 400 medley relay (47.62) and swam the 2nd-fastest 800 relay split (1:45.05) for GBR in Rio, as both relays earned silver medals behind the USA and both broke British records. Scott added a slew of national titles and new Scottish records at the recent Scottish SC Championships in early December, and he’ll lead the way for British sprinting in the years coming.

What is a leppo?

… as good as he is, didn’t swim in Rio. Sure, he was in the bigs at USA Trials, but those times didn’t hold up to put him in a final in Rio (Scott), put him on a finals relay that won medals (Scott, Chalmers), win him a gold medal (Chalmers), or set FINA junior records (Chalmers).

I’m a big fan of Duncan Scott but I’m not sure he classifies as a junior, born in 97 and I’m pretty sure he turned 19 by the olympics.

Was Kyle the youngest man to win the 100 m free Olympic gold?

I can’t remember anyone else that was younger off the top of my head.

I’ve watched the Rio 100 free race several times. He looks so far behind, and then the last 25 he passed everyone. He was really powering through the water.

I believe that’s correct. I think Schollander, who was 19 and a few months, was the former youngest.

At the end of the day its the back end speed he has got up his sleeve.
I think Tokyo 2020 Kyle will add the 200 free to his reputatre.
By then he might be the favorite too.