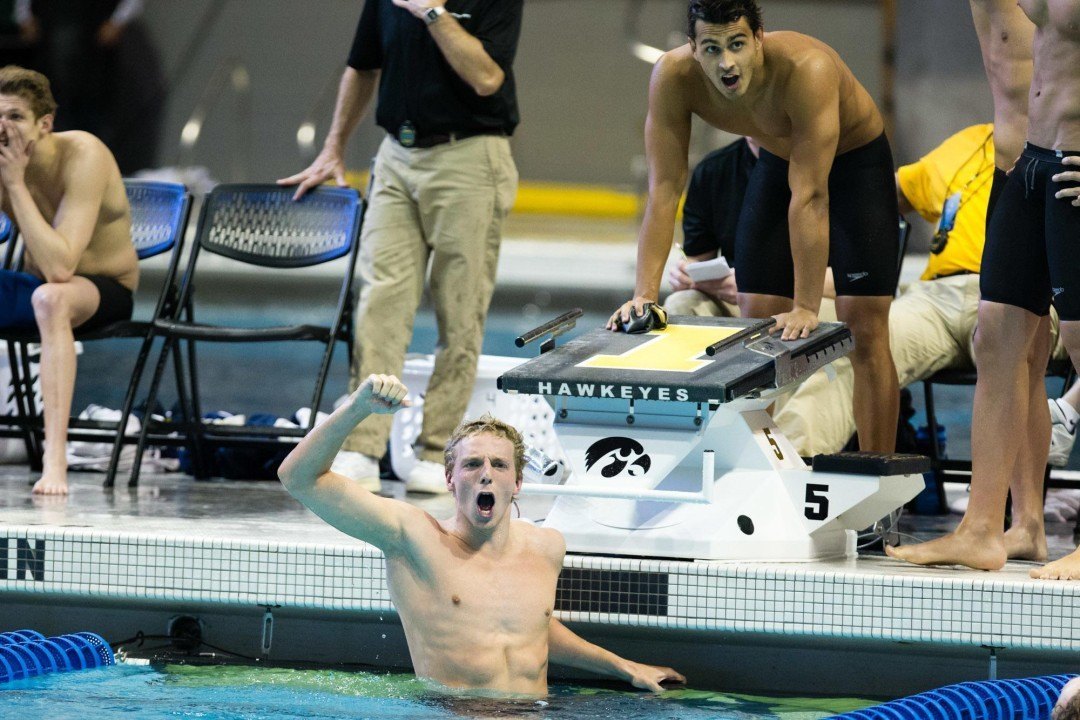 USC's Reed Malone will be a key factor in determining whether or not the Trojans can defend their conference title. Archive photo via Tim Binning/TheSwimPictures.com

After years and years of Stanford dominance, and two straight wins by Cal, the USC Trojans made history last year at the Pac-12 Championships, winning the conference title for the first time since 1979. USC executed the meet perfectly, taking out Stanford by a mere 9 points. Both USC and Stanford have endured significant losses from last season. Most notably, USC lost Cristian Quintero to graduation and Santo Condorelli to a redshirt, and Stanford lost their superstar IMer David Nolan who also graduated last year. Out of the top-3 teams in the conference, Cal was arguably the only team that didn’t lose their top man, with backstroker Ryan Murphy still in the lineup this year. Cal’s 3rd place finish last year wasn’t really indicative of what they’re capable of. They finished ahead of both USC and Stanford at NCAAs, placing 2nd overall, and will be in the fight for the Pac-12 title this year, no doubt. Recently we have learned that Cal has opted to swim Murphy, Jacob Pebley, Josh Prenot, and Jeremie Dezwirek at the Orlando PSS rather than Pac-12s, making Cal’s chance at a title much less likely to occur. Of course we can’t forget the other teams in the conference. Arizona has had a solid season, and Bob Bowman‘s Arizona State team has had a great year, and though Utah’s questionable depth might keep them from team accolades, they have plenty of talent who can swim with the big guys.

The Pac-12 is arguably the most intriguing conference in the NCAA. This is because of the close proximity of most of the teams, which creates rivalries. The three California schools have had some terrific dual meets this season, which only increases the anticipation for the conference championship as all three teams have a shot at the title. USC handily beat Stanford in early February, and Cal took out Stanford not long after. That gives USC and Cal the advantage over Stanford heading into the championship, and those two had a incredibly close dual on February 5th. USC clipped Cal by 1 point, 149-148, which sets us up for an incredible battle in Federal Way. Of course, with some of their top guns missing, Cal is hardly the same team from those duals, but still isn’t short of talent. Another one of the most talked about dual meets of the year came within this conference as well, when Arizona and Arizona State battled in early February. In what was seen as an upset, Arizona State triumphed, 168-132, which sets the table for another great battle this week.

Arizona: Renny Richmond (junior freestyler/butterflyer), Chris Wieser (sophomore distance freestyler), Chatham Dobbs (freshman backstroker), Thane Maudslien (junior backstroker/IMer), William Wihanto (freshman breaststroker), Gage Crosby (junior breaststroker), Justin Wright (sophomore butterflyer), Nick Thorne (sophomore IMer)- The Wildcats have a spread of top end talent across the board, with Richmond and Wieser sitting 2nd in the conference this year in the 50 (Richmond) and 1650 freestyles (Wieser). Dobbs is the top ranked non-Cal 100 backstroker, and the freshman Wihanto is tops in the conference this year in the 100 breast and has been a pleasant surprise.

Arizona State: Richard Bohus (junior freestyler/backstroker), Tadas Duskinas (junior sprint freestyler), Barkley Perry (junior freestyler/backstroker), Christian Lorenz (sophomore breaststroker), Patrick Park (sophomore butterflyer)- Bohus has been very impressive this year and will be key in the success of ASU’s relays, Lorenz looks like a good bet to medal in both breaststroke events and Park sits 3rd in the conference in both fly events.

USC: Ralf Tribuntsov (sophomore backstroker), Reed Malone (junior freestyler), Patrick Mulcare (freshman backstroker), Carsten Vissering (freshman breaststroker), Morten Klarskov (senior breaststroker/IMer)- Significant roster losses from last year might suggest this is a different team from the 2015 Pac-12 champs, but their dual meet record says otherwise. Mulcare and Vissering will be dangerous in their first conference championship, Malone is always good and with Cal’s Murphy and Pebley absent, Tribuntsov and Mulcare are all of a sudden in the running to claim the 100 and 200 back titles.

Utah: Bence Kiraly (senior distance freestyler), Kristian Kron (senior freestyler/IMer), Daniel McArthur (freshman backstroker), Jack Burton (sophomore breaststroker)- Despite lacking the depth, Utah has some guys who can compete with the best in this conference. Kiraly is ranked 1st this season in the Pac-12 in both the 500 and the 1650, Kristian Kron is ranked high in both the 500 free and 400 IM, and Daniel McArthur and Jack Burton have competitive rankings this season in the backstroke and breaststroke events, respectively.

200 Freestyle- In what should be one of the best races of the championships, the Pac-12 has six men who have gone 1:35 this season, with only one man under the mark. Cal’s Long Gutierrez has been 1:33.10 this year, but there are many men who are capable of running him down. USC’s Reed Malone is a dangerous swimmer who has a chance at making the Olympic 800 free relay this summer, and will surely give Gutierrez a race. Arizona will be looking to gain some big points here with 3 men ranked within the top 7, and with some of their top guns gone, Gutierrez and 2nd ranked Trent Williams will look to give Cal some much needed points with a 1-2.

200 Backstroke- With Murphy, Pebley and Jeremie Dezwirek swimming in Orlando, the top-3 Pac-12 ranked swimmers are gone and the 200 back race becomes a wide open one. Arizona’s Thane Maudslien is ranked 1st with a time of 1:42.05, and USC’s Patrick Mulcare is close behind with a 1:42.07. Barkley Perry (Arizona State), Chatham Dobbs (Arizona), Daniel McArthur (Utah), and Patrick Conaton (Stanford) have all been within the 1:42.5-1:43.2 range this year, making this race anyone’s game.

100 Breaststroke- The 100 breast might be the best race of the meet. William Wihanto of Arizona is ranked 1st in the conference so far this season with a time of 52.83, but there are quite a few guys who are close behind. Carsten Vissering, Gage Crosby and Christian Lorenz have all been 53-low this year and should all contend for the win.

With their dual meet victories over both Cal and Stanford, and Cal’s diminished roster, expect USC to win their second straight Pac-12 title. Stanford and Cal will probably be close for 2nd, but Cal’s losses may be too difficult to overcome, and the order of the top-3 looks like it could be the same as last year. As for the Arizona battle, despite Arizona State’s dual meet victory over Arizona, I see the Wildcats getting by the Sun Devils based on the fact they have more top end talent.

Cal obviously not even aiming at the win here. Have their sights set on a team in Austin.

USC expected to repeat…..huh. Can someone tell me how that whole 1/2 redshirt thing works?