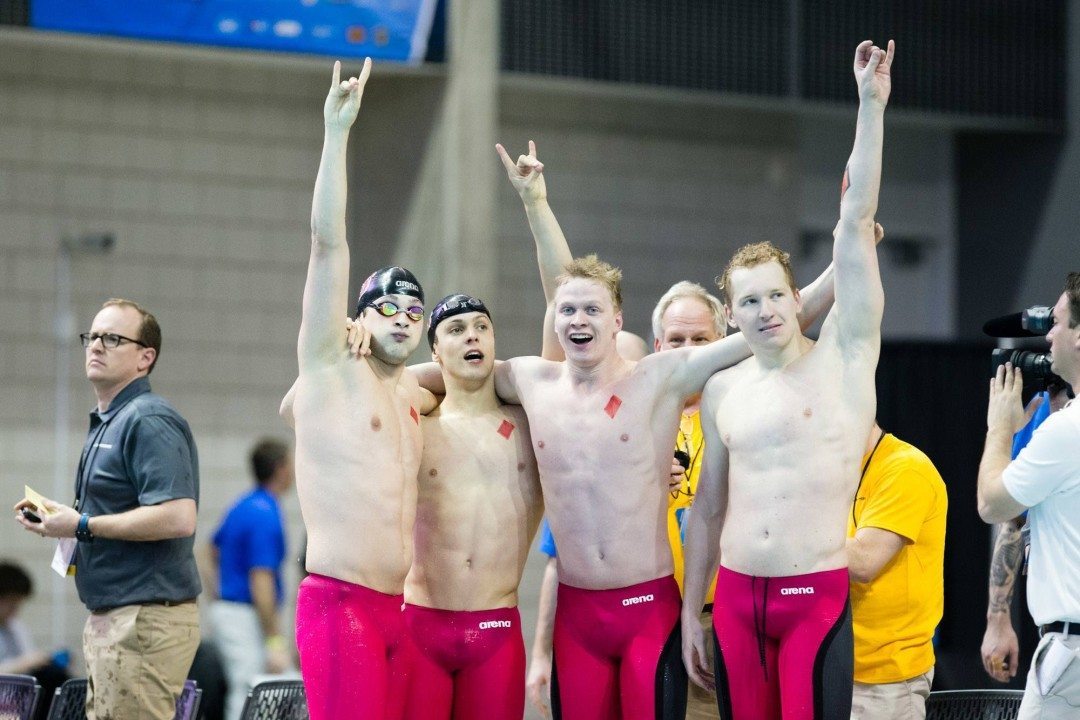 The NC State Wolfpack was hundredths away from the title last year, and they'll fight down to the last yard again for this year's title. Archive photo via Tim Binning/TheSwimPictures.com

The rise of NC State has been abrupt, to say the least. Seeded to score the 2nd-most points at the upcoming Men’s NCAA Championships behind only Texas, the Wolfpack is dangerous.

Our pick to win the 200 free relay, NC State comes in with the top seed of 2:48.52. Simonas Bilis is their rock here, but sophomore Ryan Held has stepped up his game and should provide a split that is, at the least, equivalent to Bilis’. The senior Bilis was 41.76 leading off at ACCs, and Held followed with a 41.62.

Soeren Dahl is the third returner from their 2015 relay, which finished 2nd at NCAAs with a 2:47.14. USC’s all-star relay, with all but lead-off Cristian Quintero splitting sub-42’s, was a hair ahead at 2:47.06. The Trojans lost Quintero along with redshirts Santo Condorelli and Dylan Carter, and will not be at the same level as they were last year.

The Wolfpack has filled the hole left behind by the graduation of David Williams (41.55 anchor at 2015 NCAAs) with the addition of Joe Bonk from Virginia Tech. Bonk time trial-ed a 42.53 at ACCs, giving him the 9th-ranked time in the country this year, which means that the Wolfpack own three spots within the nation’s top 10, with Bilis and Held holding down #2 and #3, respectfully, behind Florida’s Caeleb Dressel.

It won’t be USC, but Texas and Auburn, that NC State will be dueling with for the last event title of the Championships. From the psych sheets, Auburn is the bigger threat, having posted a 2:48.64 at the SEC Championships. They return their entire 2014 relay, but have replaced Jacob Molacek with fast-rising Hungarian sophomore Peter Holoda, the latter posting a 41.28 anchor at SECs. Kyle Darmody was the other sub-42 split for them at SECs, and Arthur Mendes and Michael Duderstadt held up 42’s to propel them to the SEC title. Holoda competed at NCAAs last year as a freshman, but didn’t final in any of his individual events and only swam prelims of this relay, making him a wild card. If he’s on, Auburn will be in contention for the title. If he’s off, even a little off, the Tigers will be out of it. They don’t have quite enough across-the-board depth to contend without a big leg like Holoda showing up.

Texas sits at 3rd on the psych sheets with a 2:50.03, but they show time and time again that all of their eggs are in the NCAA basket. Without the same kind of conference competition and atmosphere as the SEC, Big Ten, Pac-12, and ACC (among others), Texas doesn’t need to put in the emotional and physical energy into a big meet right before NCAAs. Jack Conger ripped a 40.96 split on the end of the Longhorns’ medley relay last year, and can be considered a “clutch” relay performer after his World University Games sub-48 split in long course last summer. Matt Ellis and Joe Schooling return from last year’s relay, though Brett Ringgold (42.04) and John Murray (42.42) have been quicker than Ellis so far this year.

In addition to those five, freshman Tate Jackson was a 42.75 at Big 12s, giving the Longhorns six viable candidates for the relay. It’ll be up to coach Eddie Reese in the end, based on performances throughout the meet, but conservatively giving Conger and Schooling 41 low splits, Ringgold a 42 low lead-off, and probably Murray a 41 high/42 low anchor, Texas has what it takes to upend the Wolfpack. But the Longhorns were off last year, only able to muster up a 4th place finish, nearly two seconds behind a considerably less deep NC State team that was firing on all cylinders the whole meet. Needless to say, this one will probably come down to the touch.

Under the big three, a bunch of perennial powers will be at play. California should get a boost from the return of Ryan Murphy, who was at the Orlando Arena Pro Swim Series instead of the Pac-12 Champs. His 41.14 anchor was the fastest of any 400 free relay legs and 3rd-fastest of the entire meet, and he’ll likely join forces with Justin Lynch, Andrew Seliskar and Long Gutierrez. Seliskar wasn’t able to split under 43 at Pac-12s, but he also wasn’t fully rested by the looks of his general performance at the meet.

Florida has Dressel, but as is the same with their 200 free relay, they’ll need more from their supporting cast to perform well in the A final. Indiana boasts Blake Pieroni, and they have more of a consistent quartet than the Gators. Their Big Ten rivals Michigan graduated sprint stalwart Bruno Ortiz, but Paul Powers is coming into his own in his 2nd season with the Wolverines.

Two more SEC powers will be in the mix here, too. First off, Alabama, with 2014 50 free champ Kristian Gkolomeev anchoring. They didn’t use 2015 relay members Alex Gray and Brett Walsh at SECs this year, so they have more options to work with at NCAAs. Georgia lost Nic Fink, but have slapped on Taylor Dale to their relay. Both teams finished outside of the top 8 last year, but with teams like USC and Stanford suffering from holes in their free depth, there’s room at the top for teams like Georgia and Alabama.

Dark Horse: Missouri has Michael Chadwick as a weapon, but didn’t get enough out of him or their other three legs at SECs. Their women had a huge NCAAs last weekend, improving hugely on their seeds. They actually more than doubled how much they were ‘supposed’ to score based on psychs. If the men are on a similar taper improvement track, this relay might have what it takes to score in the championship final.

If Texas has the team title already sewn up again, will they have the same motivation for this relay as if it were for the title? Hopefully, pride and wanting to end the meet the right way would be enough motivation. Human nature might come into play in this event, in the aforementioned scenario.