Rooney roared back in the 2nd circle seeded heat to take lane 4 in the final away from Andrew. Crushing to 50 second barrier, he hit the wall in 49.67. Stock photo via Adidas 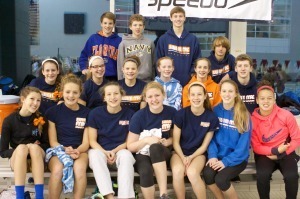 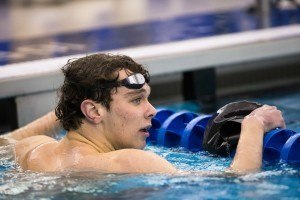 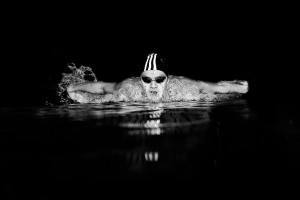 The U.S. Junior National Championships continue this morning with day 2 prelims. The session will feature the 200 back, 100 free, and 400 I.M. for the men and women.

In the men’s version of that event, Michael Andrew (50.67) will make his first appearance as the 3rd seed in a stacked field of men’s sprinters. He’ll have to power past Colin Bone (50.43) and Maxime Rooney (50.44) if he wants to win, but his personal best 50.46 from last weekend is right on target.

Ella Eastin and Mark Jurek both won the 200 fly on Thursday night. They’re also each in position to take another gold. Eastin comes in with a large advantage over the field, entered at 4:43.13.

Nashville Aquatic Club’s Alex Walsh swam to a near personal best this morning, qualifying for her first championship final after narrowly missing the top 8 of the 100 breast yesterday. Her 2:12.67 was good for 2nd seed behind Emma Seiberlich, who qualified 1st in 2:12.43 with a new best time.

Grace Ariola came into the meet as the fastest in the field, and she’ll have a chance to win the event tonight after qualifying 3rd in 2:14.83.

The 5th spot going into finals tonight went to Sean Grieshop at 2:02.55, well under his previous best of 2:03.79. Grieshop was a multi-event champion at winter juniors, and will compete in his first final of the meet in this event.

Coming into prelims, there were only 3 women swimming at the meet with times under 56 seconds. After this morning, 2 more junior women broke that barrier.

The field is led by incoming Arizona freshman Katrina Konopka. She dropped 7 tenths to clutch the top seed in 55.29.

2nd through 4th were separated by .04, setting up a tight race for the top 3 spots tonight. Melissa Pish (55.91) took the 2nd spot just ahead of Caroline McTaggert (55.93), who will start at UCLA in the fall. Brooke Hansen (55.95), who will join the Texas Longhorns this upcoming season, dropped a second to earn 4th.

Incoming UCLA Bruin Mary Pelton, who was seeded 2nd coming into the meet, will get a chance to drop her time out of lane 4 in the B-final. She touched at 56.51

In his first swim of the meet, pro swimmer Michael Andrew tore through the water to a new personal best time at 50.23. That was faster than any other swimmer’s best time entered in the meet.

That was until Maxime Rooney hit the water. Rooney roared back in the 2nd circle seeded heat to take lane 4 in the final away from Andrew. Crushing to 50 second barrier, he hit the wall in 49.67. Those two men will battle tonight in the middle of the pool.

Colin Bone had the top seed coming into the morning. He’ll get a 2nd swim tonight after finishing 13th in 51.21.

Mark Jurek just missed the final. He came into the session with the fastest time, but will swim in the B-final tonight. He was 9th with a 4:28.11.

it’s not granted he will go faster than 50.2, with the pressure and all … but he is clearly on the path of breaking 50, it’s just a question of time

Funny you ask, I was just looking through the roster and he isn’t on the list for the 100 free. Which leads to the question does that mean he is not swimming the 100 free at the junior worlds?

Will he be at Sr Nats to try to qualify for Jr Worlds?

Caroline mctaggart fits into that “future pac-12 rivals”. will swim at UCLA with pelton

Thanks. Edited that in.

Nevermind. Just had my question answered in the article!