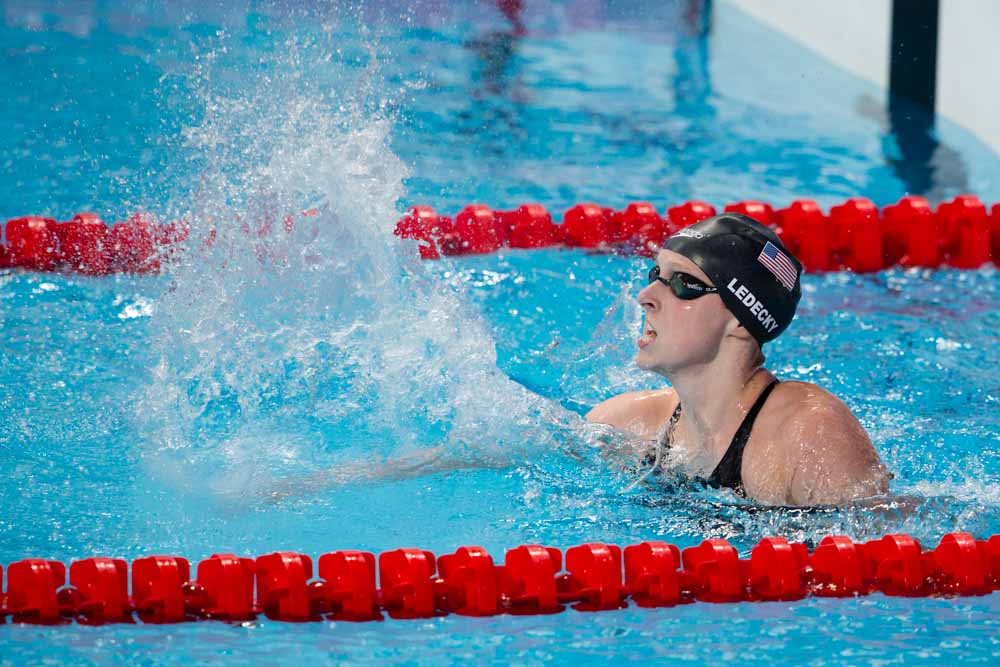 Follow along for live updates from the seventh day of the 2015 FINA World Championships in Kazan, Russia. Current photo via Tim Binning/TheSwimPictures.com

Sarah Sjostrom broke the championship record in the women’s 50 butterfly for the second time in as many days, winning the world title with her time of 24.96. The 2013 World Champion, Jeanette Ottesen, finished second, earning the silver medal with a 25.34. China’s Lu Ying lowered the Asian record to 25.37 to win the bronze medal.

Inge Dekker added a fourth place finish in the women’s 50 butterfly, touching at 25.64. Farida Osman finished directly after her, breaking the African record with a 25.78.

Fran Halsall and Ariana Vanderpool-Wallace were the final two swimmers under 26 seconds at 25.85 and 25.93, respectively.

Florent Manaudou was the star of the men’s 50 freestyle, winning with a 21.19 and scaring the championship record of 21.08 from 2009. After breaking the American record yesterday, Nathan Adrian wasn’t as fast during the final today, but his time of 21.51 held up for a silver medal. The Bronze went to Brazil’s Bruno Fratus with a 21.55.

Vlad Morozov found himself on the wrong side of the touch tonight, finishing .01 out of the bronze position with his time of 21.56. He won a swim-off against Anthony Ervin last night to earn the 8th spot in finals.

Ukraine’s Andrii Govorov and Italy’s Marco Orsi tied for fifth with identical times of 21.86. Kristian Gkolomeev and Benjamin Proud rounded out the final with their times of 21.98 and 22.04, respectively.

Emily Seebohm continues to swim well after a busy week, earning another Gold medal in the women’s 200 backstroke. Seebohm ran down Missy Franklin on the final 50 to touch first, breaking the Australian record with her time of 2:05.81 in the process. Franklin touched second for the silver at 2:06.34 and Katinka Hosszu finished third for Bronze at 2:06.84.

Daria Ustinova missed her Jr World Record mark by a half second, finishing fourth with her 2:07.64.

Jenny Minseng, Dominique Bouchard, and Hilary Caldwell all finished together for fifth through seventh with 2:08’s.

Ruta Meilutyte leads the way into finals with the top time of the semi final at 29.98. She finished just ahead of Yuliya Efimova who finished second at 30.14, and Jessica Hardy, the third place qualifier at 30.25.

The final will be very fast tomorrow, as all eight finalists finished under 31 seconds. Jennie Johansson, Mariia Liver, and Alia Atkinson are sitting fourth through sixth heading into the final between 30.39 and 30.78.

Hrafnhildur Luthersdottir and Moniek Nijhuis earned the final two spots at 30.90 and 30.99, respectively.

Chad Le Clos was on a mission, and it paid off. He broke the African record en route to winning the World title in the men’s 100 butterfly with his time of 50.56. Laszlo Cseh made history today, becoming the first man to ever medal in all three butterfly events at the same World Championships. He picked up the silver with a 50.87. Joseph Schooling also found his way on the podium, posting a new Asian record time of 50.96.

Konrad Czerniak, Pawel Korzeniowski, and Li Zhuhao rounded out the final between 51.28 and 51.66.

Cate Campbell leads the field into semi-finals tomorrow with her time of 24.22. She is almost dead even with Ranomi Kromowidjojo, who won the other semi-final heat with a 24.23.

Sarah Sjostrom and Bronte Campbell are dead-locked as well, sitting in third and fourth at 24.31 and 24.32.

Ariana Vanderpool-Wallace, Simone Manuel, Fran Halsall, and Chantal Van Landeghen are the final four swimmers advancing to the final. It took a 24.52 to qualify.

Camille Lacourt looks to be in great shape after after posting the top time in the semi-finals of men’s 50 backstroke with a 24.27. There was a lot of speculation about what shape he would be in after missing some time due to injury, but that doesn’t appear to be affecting him.

Matt Grevers is in second with his time of 24.59, just ahead of the Australian duo of Ben Treffers and Mitchell Larkin at 26.64 and 24.65, respectively.

Liam Tancock, Vlad Morozov, David Plummer, and Lavrans Solli were the final four qualifiers at 24.75 to 24.93.

KATIE LEDECKY!!! WOW! I am out of words after watching Ledecky destroy her own World record in the women’s 800 freestyle, posting a time of 8:07.39. She went out after hit, and it was evident with her splits. She flipped at the 400 meter mark at 4:03.22; a time that was still faster than everyone else in the individual 400 freestyle earlier in the week. She lowered her record by 3.61 seconds, becoming the first woman ever under 8:10.

Lauren Boyle broke the Oceanian record to earn the silver medal despite finishing more than ten seconds behind the World Champion, Ledecky. Jaz Carlin earned the bronze medal with her time of 8:18.15.

Jessica Ashwood was in the hunt, but just missed the podium with her time of 8:18.41.

Lotte Friis and Boglarka Kapas finished fifth and sixth at 8:21 and 8:22, respectively, and Sarah Kohler and Sharon Van Rouwendaal rounded out the final.

The United States’ relay team of Ryan Lochte, Nathan Adrian, Simone Manuel, and Missy Franklin held off the Dutch to win the first ever mixed freestyle relay world title with a new world record time of 3:23.05. Adrian did the biggest service for the squad, splitting 47.29 on the second leg of the race.

Lochte, Adrian, and Franklin on the mixed relay? Looks like they are desperate for some medals.

who is leading off? adrian probably wants to swim a redemption 100 free

Universal sports not working for stream?

no stream on weekends. they run it on NBC today