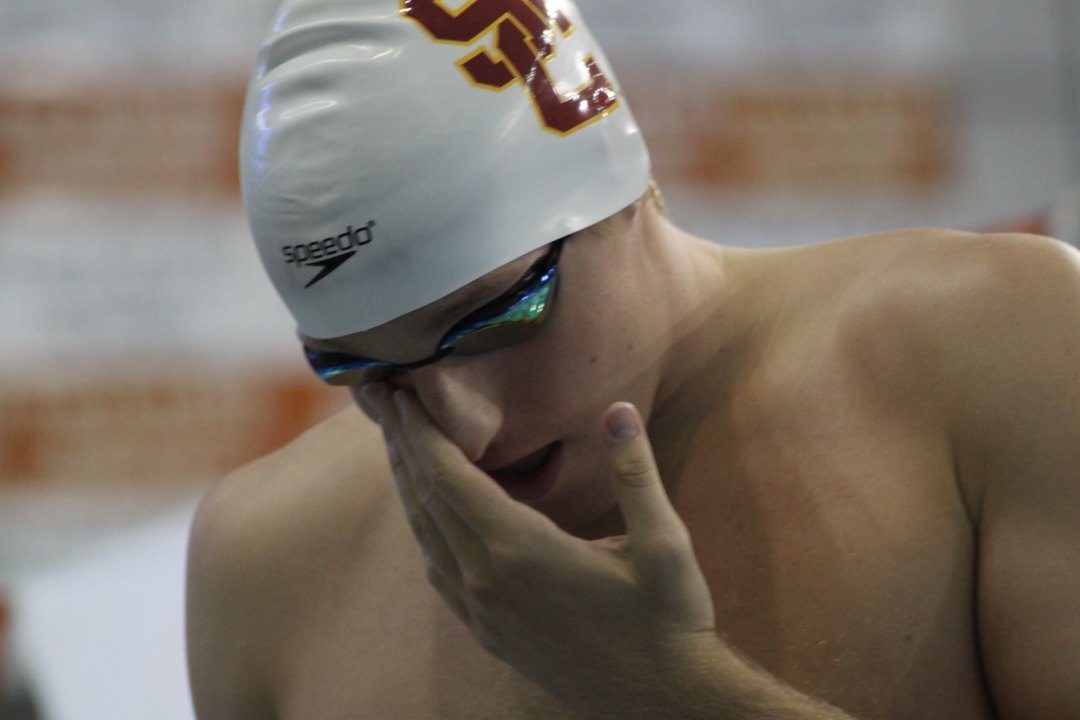 Who knew? All it took was four key swimmers returning from redshirt semesters to turn USC into the fastest-rising team in our final regular-season power rankings. Archive photo via Andy Ringgold/Aringo Photography

Our most recent men’s power rankings, from late January, are here.

Conference championship season is upon us in the NCAA’s Division I, which means it’s time for the final edition of our NCAA Power Rankings.

We started with the women’s rankings yesterday, and now we move to the men’s programs, most of which are a week out from the start of their conference championship meets.

For the sake of fairness, we’re trying not to take into account swims already done at a conference meet (like, hypothetically, an insane American record at SECs) because it would involve comparing suited, rested swims for one team to midseason swims for another.

At the conclusion of the conference round, we’ll be back with our official NCAA Predictions.

SwimSwam’s Power Rankings are somewhere between the CSCAA-style dual meet rankings and a pure prediction of NCAA finish order. SwimSwam’s rankings take into account how a team looks at the moment, while keeping the end of the season in mind through things like a team’s previous trajectory and NCAA scoring potential. These rankings are by nature subjective, and a jumping-off point for discussion. If you disagree with any team’s ranking, feel free to make your case in a respectful way in our comments section.

Wins over Purdue and Northwestern ended the season on a strong note, and freshman sprinter Bowe Becker keeps looking more and more like the real deal for a school with a legendary sprint background within the Big Ten.

The schedule has been tough sledding for the ‘Noles, who lost to Auburn and Wisconsin since the last rankings. But FSU’s top-end swimmers are still competing well enough to keep the team in good shape for the post-season.

The Badgers beat Florida State with ease, and though they lost to Auburn in the same triangular, they did bloody up the Tigers through the freestyle events, no small feat. Cannon Clifton, Brett Pinfold and Matt Hutchins combine to cover pretty much the whole yardage spectrum for a Wisconsin team that could find some big free relay points this year.

They were beaten pretty soundly by Michigan in what was really their only major dual meet test of the year. Still, OSU is one of the Big Ten’s better teams, with breaststroker DJ MacDonald looking like one of the conference’s top threats.

The Gamecocks didn’t look great against William & Mary and East Carolina, but they didn’t really have to. That distance group is for real, led by Akaram Mahmoud and Cody Bekemeyer.

Tennessee caught a Florida team at the wrong time and got lit up late in the regular season. This team’s fate depends on whether swimmers like Evan Pinion can show up at SECs and NCAAs like they did midseason.

The Cards got decked by Indiana, but rebounded with some nice swims at their home First Chance Meet. Another year of familiarity with the ACC should help, and Carlos Claverie has been on fire all year.

A big jump for Indiana after waxing Louisville. The Hoosier sprint group is popping like it hasn’t in years, and the mid-season addition of Brazilian flyer Vinicius Lanza is already paying dividends.

Stanford lost to a red-hot USC team that reloaded at the semester break. The season-ending dual with Cal might shed some light on how Stanford is rebounding from that loss.

The home Missouri Invite was a relative success, and Mizzou’s highly-ranked relays make them a sneaky-good threat in the SEC.

‘Bama hasn’t competed since the last rankings (besides the SEC meet we’re not including in these regular season rankings), but are looking strong after adding the versatile Dutchman Laurent Bams and offering sportswriters a chance to use the phrase “‘Bama’s Bams” in an actual story.

Wins over Wisconsin and Florida State were as good as expected. Michael Duderstadt continues to kill it in the breaststrokes. Auburn really only moves down because of an extraordinary jump by a certain band of Trojans.

The Wolfpack reigned supreme in North Carolina once again, topping UNC as well as ACC rivals Virginia. It seems about that time of year again that the Wolfpack starts to howl through the NCAA relay ranks – but avoiding false starts has to be the priority for the Pack in 2016.

Who knew adding Ralf Tribuntsov, Carsten Vissering, Patrick Mulcare and Alex Valente could make such a difference? Well, besides everybody. USC is maybe the nation’s hottest team after sweeping Pac-12 rivals California and Stanford, and 2015 proved the Trojans can really roll through the postseason when they build some momentum.

Considering these are technically our final rankings of the regular season, we kind of have to pretend Caeleb Dressel didn’t just go 18.23 in a 50 freestyle. But seriously… did you see that???

As well as Indiana is swimming, Michigan is still considered the odds-on favorites to take yet another Big Ten title, and for good reason – this roster is outstanding. The Wolverines sliced up Ohio State, then watched freshman Mokhtar Al-Yamani add another 43.2/1:34.7/4:22.8 freestyler to the pile of relay pieces at the Michigan First Chance meet.

Cal lost a major rivalry match to USC, but it’s near-impossible to drop them in the rankings with swimmers like Ryan Murphy‘s and Josh Prenot‘s records in championship meet season. The swimmer to watch now is freshman Andrew Seliskar, who has had a quiet rookie year (by his own lofty standards, at least), but stands to have a huge impact at NCAAs.

The ‘Horns beat Arizona and TCU, then probably found more competition at their own intrasquad class relay event that featured 18.9 splits from Townley Haas and Brett Ringgold, plus a 19.8 fly split from Joseph Schooling.

It is hard to judge the SEC teams now that they are competing in their conference championship. However, I think that UF being at 4 is more than fair, given that their dual meet record was not great, but their mid-season meet was solid.

I am guessing anywhere from 3-6 at NCAAs.

I actually think Florida has a good shot at #2.
But in my rankings, they’d be 3rd.

Thanks Sean. I value your opinion.? Way to get in there Sun Devils!!! Hopefully will end up higher after full taper and shave.

its funny how every year these polls rank USC in the twenties, and every year by the end they end up top 5. this is a team who lost Santo and Dylan Carter to red shirt. You guys write an article about Long Guttiereze not being at the USC Cal meet and how he would have helped them win. How much would USC have won by if they had Santo and Dylan.

Pac12 – that’s not true. That doesn’t happen every year. It happened this year, because USC was without many of their best swimmers in the first semester, whom have since returned. Also, our poll doesn’t go into the 20’s, nor is it actually a poll. You may be confusing our Power Rankings with the CSCAA Poll, which ranks down to 25th.

Ranked 10th, and again, they didn’t have NCAA Champion Cristian Quintero in the fall semester.

Lol. I love when Braden gets salty.