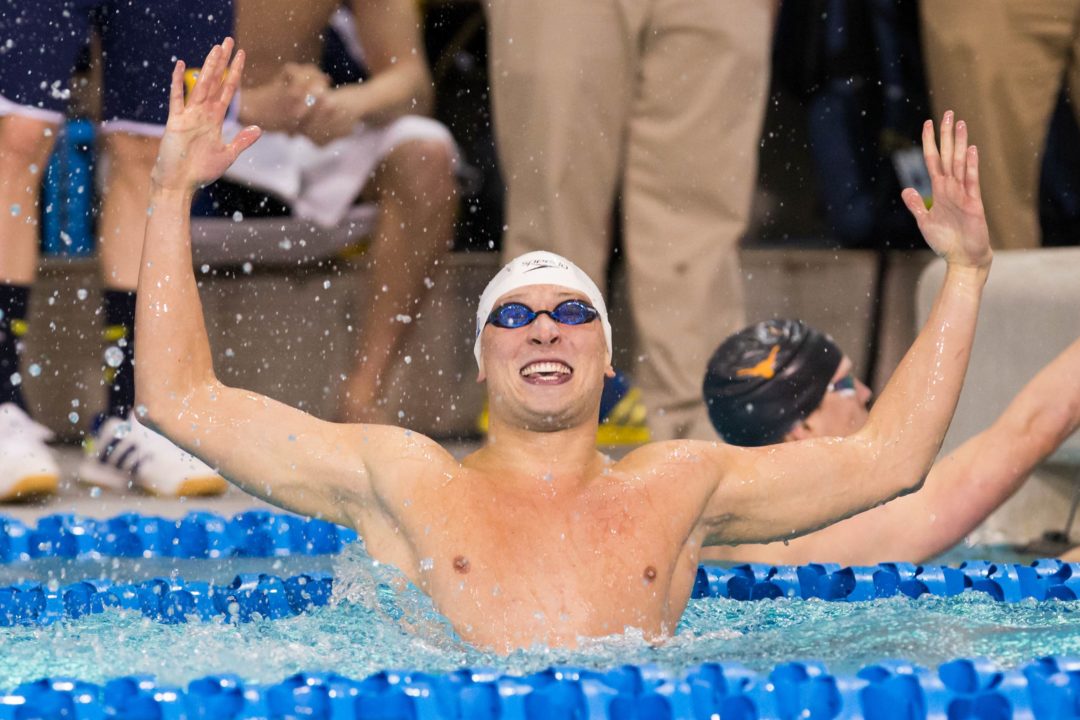 The final day of the men’s NCAA Championship has arrived, and it’s shaping up to be a great one. Texas leads the team points by 6 over Cal, with Florida hoping to make a big prelims run past both squads. Three American records fell last night, several by huge margins, and with how fast this meet has been so far, it seems no record is completely safe.

Prelims begins with the loaded 200 backstroke, where Indiana’s Eric Ress holds the top seed by 100 back champ Ryan Murphy looks to be a huge threat along with defending champ Drew Teduits of Wisconsin. The 100 free will see Auburn’s Marcelo Chierighini try to erase his disappointing 50 free with a big swim against 200 free champ Joao de Lucca. Arizona’s Kevin Cordes broke his own American record in the 100 breast twice yesterday, and he’ll swim his signature 200 breaststroke this morning before Michigan sophomore Dylan Bosch leads the 200 fly field into action.

This morning will also feature prelims of the 400 free relay and heats of the mile, plus the platform diving prelims.

The three top seeds coming into the meet ended up in the top three spots to open up the Saturday morning session.  Ryan Murphy continued his excellent meet this morning, taking the top seed in 1:39.16, including a field-best 24.65 final 50.  Top seed Eric Ress of Indiana woke up after a bit of an off day yesterday to take second in 1:39.25.  Ress pushed the front half  harder than anyone else in the event, flipping at 48.18 at the 100 mark.  Sean Lehane of Tennessee took the third spot after winning the opening circle seeded heat in 1:39.42.

The Texas Longhorns got two guys into the top eight.  Kip Darmody had a huge swim for the Longhorns out of heat one, clocking in at 1:40.20.  Although it’ll be tough for anyone to touch Murphy, between Darmody’s third place finish in the 100 back last night and the way Texas has been swimming, don’t be surprised if you see him grab another top three individual trophy.  Freshman stud Jack Conger was sixth in 1:40.27.

Bryce Bohman of West Virginia made his second A-final of the meet with a seventh place 1:40.36.  Murphy’s teammate Jacob Pebley snuck into the A-final with an eighth place 1:40.42, a big break for the Bears in their efforts to match the Longhorns.

However, Texas should have a point edge in the event tonight, with two additional swimmers, Will Glass and Patrick Murphy, getting into the B-final.

Much like he did at SEC’s, Marcelo Chierighini rebounded from a sub-par 50 freestyle to turn in a great 100, qualifying first for tonight in 41.52.  With teammate Kyle Darmody next to him, Chierighini, the top seed in the event, rode the lane line between lane three and lane four the entire final heat, with Darmody right on his hip on the other side of it.  The drafting strategy paid big dividends, as Darmody ended up sneaking into the A-final with an eighth-place 42.42.

Texas and Cal even-split the team race here, each getting one swimmer up and one swimmer down.  John Murray continued his breakout meet with a 41.77 to finish second for the Longhorns, the only other swimmer in the field to crack 42, while Matt Ellis finished tied for ninth in 42.47.  For the Bears, Seth Stubblefield got into his second A-final of the meet after his seventh place 42.31, and Tyler Messerschmidt, 13th, got into the B heat.

Joao De Lucca of Louisville, last night’s 200 freestyle champion, was third in 42.09.  Although he was a little off his best time in the 200, De Lucca recorded a lifetime best in the 50 on day one, so he has plenty of speed at this meet.  Cristian Quintero of USC continues to display his speed versatility, recording a lifetime best of 42.11 to finish fourth.  Shane Ryan, last night’s runner up in the 100 back, used a blazing first 50 (20.01) to earn a spot in his second A final of the meet, touching in 42.13.  Brad deBorde of Florida, out in 20.04, also showed great early speed to finish sixth in 42.18.

Two more American record swims under his belt after yesterday, Arizona’s Kevin Cordes lined up another top seed with a 1:50.44 in the 200 breast. Cordes was pretty smooth through the middle two splits, but actually came home in 28.1, not far off the 27.9 he closed his American record in last year.

Indiana senior Cody Miller finally broke through after falling somewhat short of expectations in his first two swims; the Hoosier is second in 1:51.85.

With the 100 breast last night being a weak link for an otherwise red-hot Texas team, Cal is certainly looking to the 200 breast as an opportunity to make a big move. Chuck Katis started that off in a big way early, crushing a 1:52.84 to jump into the top 8 from a non-circle-seeded heat, a time that held up as the 6th seed. Josh Prenot also made it into the A final at 1:53.14 for 7th, and the Bears dodged a bullet when fast-rising Texas freshman Will Licon missed the championship heat, taking 9th by just .02.

Florida’s got two men in that B heat, Eduardo Solaeche and Matt Elliott, as the Gators hope to track down the top two teams. Michigan has one up with Funk, but in terms of the leaders, Cal clearly got the best of this event.

An entertaining prelims run set up what looks like a crazy 200 fly for tonight. In the second circle-seeded heat, Florida’s Marcin Cieslak roared away with a new event-leading time and further adding to his candidacy for Swimmer of the Meet. But Cieslak’s 1:41.48 suddenly paled in comparison when the final heat rolled out, as top-seeded Michigan sophomore Dylan Bosch blasted a 1:40.67 to steal lane four for tonight’s final. Cieslak and Bosch went 2-3 behind Tom Shields in this event last year, and the finals battle should be extraordinary: both men went out in exactly 23.00, with Bosch pushing the second 50 and Cieslak instead working the third leg before both shut things down over the closing split.

Cal’s Marcin Tarczynski is third in 1:42.02, making the team battle even more interesting. Michigan and Florida each got a second swimmer up (Kyle Whitaker 4th in 1:42.53 for Michigan and Sebastien Rousseau 7th with a 1:43.09 for Florida), while Cal has one up and one down, with freshman Long Gutierrez tied for 14th.

Arizona State’s top swimmer, Alex Coci, leads the B final at 1:43.11. A bunch of different schools are represented in that heat, including LSU by Frank Greef, Florida State with Connor Knight and Columbia with David Jakl.

Texas is going to struggle points-wise in the last two individual swimming events, putting only 1 down in the 200 breast and scoring no one here. The goal for Cal (and Florida if they can claw their way into things) will be to stock up a big enough lead over these two events to withstand Texas’s diving points and set up a final relay showdown. As swimming fans, we can only hope all three teams are still in the race at that point – the tension on that final relay would be insane.

It’s been a good day for Auburn so far, and the Tigers continued that trend by taking the top seed in the 400 free relay. James Disney-May led off in 42.76, and the team’s pair of 100 freestyle A finalists each put up big splits on the end to go 2:50.00. Freshman Kyle Darmody was 41.9 and Marcelo Chierighini anchored in 41.2 for Auburn.

Cal, Texas and Florida look like they’re in full battle mode here, knowing the meet could come down to this event. The Golden Bears are the 2-seed with Texas just three tenths behind in third and Florida trailing them by just .04.

Cal went 2:50.64, getting a 42.4 leadoff from Tyler Messerschmidt, a 42.4 split from Ryan Murphy, and a 42.3 from Seth Stubblefield, who’s come up big in anchor situations for the Golden Bears all week. Cal also seemed pretty safe on the exchanges, with a pair of .4 reaction times, so look for them to push things tonight if the meet is still up in the air.

The Gators put up a 2:50.96, the only team in the field to have all four men under 43. Brad deBorde led off in 42.64, and Corey Main had the fastest split at 42.5. In addition, Marcin Cieslak was 42.8 and Matt Curby 42.9. Though they dominate in consistency, Florida will likely need someone under 42 if they need to make a run at the top three teams tonight.

For those already getting prepped for finals, those seeds mean Cal and Florida will swim side-by-side tonight, with Auburn sitting between Cal and Texas in what could be the deciding race of the championships.

The final two teams in the championship heat will be Tennessee and USC. Luke Percy was a solid leadoff for the Vols in 42.7. Meanwhile USC has almost the same crew that won the 800 free relay last night. Cristian Quintero was 41.87 anchoring, but they’ll need Dylan Carter to find a little more speed than a 44.2 leadoff to move up.

Ohio State sits 9th in 2:52.08, and in what should pretty well officially rule Michigan out of title contention, the Wolverines took 10th, missing another A final in a relay they desperately needed. Michigan went 2:52.21 with all four swimmers hovering right around 43.0.

Louisville also missed the A final after coming in with the third seed. The Cardinals went 2:52.73 to take 11th, just behind Michigan.

The morning session continues with prelims of platform diving, and the early heats of the mile will swim this afternoon. The top 8 in that event kick off finals tonight at 7 PM Central Time.

I’m hoping for a Gator Day so we can get a legit three team final event throwdown.

Is there a live stream for prelims or just finals?