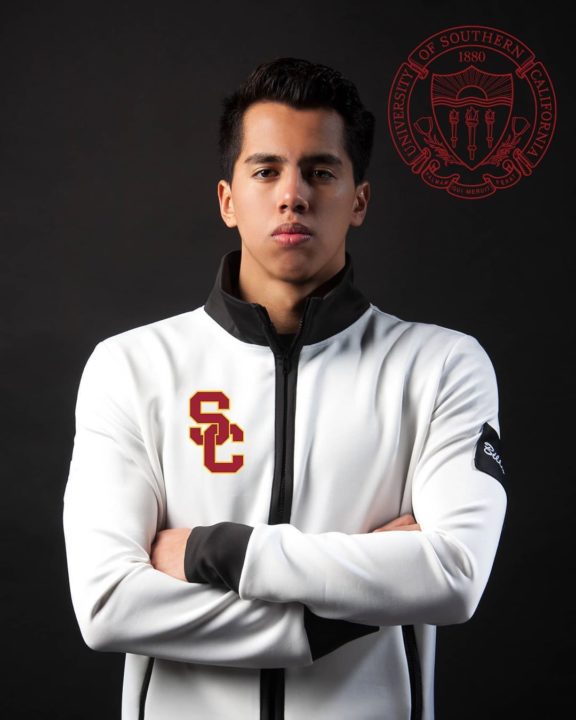 Billy Cruz, one of the best sprint freestylers in the history of the NJCAA, will attend USC beginning in January of 2021. Current photo via Billy Cruz

At one point during the 2019-2020 swimming season, Billy Cruz was tied as the fastest collegiate 50 freestyler in the country. And now, he’ll take that sprint speed to the famous sprint pool of the Uytengsu Swim Center at the University of Southern California.

Cruz announced late Sunday evening that he would be transferring from Iowa Central Community College in Fort Dodge, Iowa to USC, where he’s planning to arrive in January 2021. This makes Cruz the first public commitment to USC since announcing the hiring of new head coach Jeremy Kipp last week.

IT'S OFFICIAL!!! I am very excited to announce that I will be attending The University of Southern California next January 2021, where I will continue my academic and swimming career in the NCAA Div 1. I would like to thank everyone for their support! A special thanks to my family,friends and coaches! I am beyond excited to start a new chapter of my life and being a Trojan. FIGHT ON!!!✌ #usctrojans #uscswimming #usc

Prior to college, Cruz represented the Mexican National Team, but lived in Montreal, Canada. He matriculated to Iowa Central, a two-year community college that is part of the NJCAA. The NJCAA athletics system is designed for a stepping stone, sometimes athletically and sometimes academically, for swimmers to progress to four-year NCAA or NAIA institutions. The 2019-2020 season was Cruz’s first at Iowa Central.

At the NJCAA National Championship meet, one of only two collegiate national championship meets that were able to complete prior COVID-19-caused cancellations sweeping through the sport, Cruz led Iowa Central to a 3rd-place team finish. That included wins in the 50 free, 100 free, 100 fly, and a runner-up finish in the 100 breaststroke. His results were among the most successful meets in recent memory for a non-Indian River swimmer at the NJCAA level, and included 2 Iowa Central relay wins.

The USC men are badly in need of building the base and depth of their team moving forward, and Cruz will join an incoming class for the 2020-2021 season that does that in a big way. Including the 13th-ranked recruit in the class of 2020 Ben Dillard, USC will bring in at least 7 swimmers in addition to Cruz next season.

While Cruz’s 50 freestyle time (and his 42.9 100 free relay split) are the standout results, he brings some versatility to USC’s lineup as well.

The Trojans finished 6th out of 6 teams at last year’s Pac-12 Championship meet. That includes a last-place 200 free relay, albeit a relay that is scheduled to return all 4 legs next season.

You’re a real one if you know the reference.

This is huge for Kipp and USC. Lots of untapped potential.

He has three years of eligibility, correct?