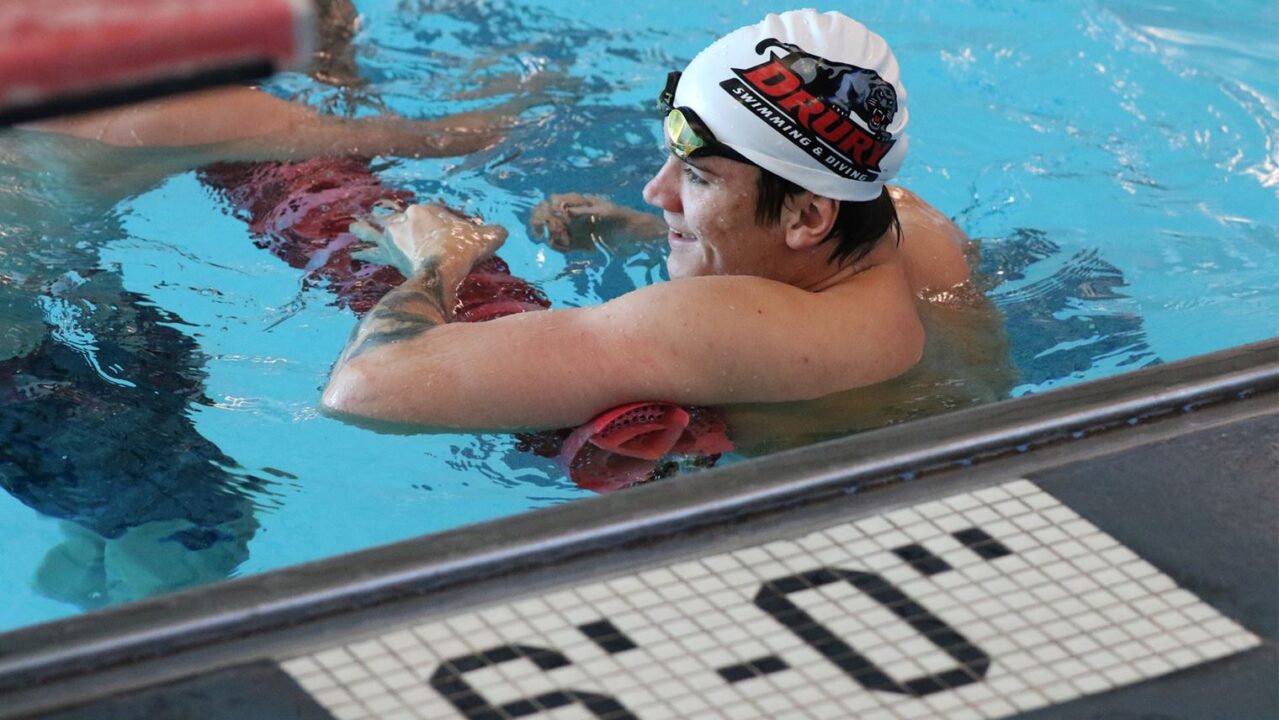 Karol Ostrowoski has decided to withdraw from the NCAA Transfer Portal, for now, and finish the 2021-2022 season as a member of the team at Drury, before looking for a new program this summer.

“I want to help the team win a championship,” Ostrowski told SwimSwam on Wedneady.

He then represented his native Poland at the Olympic Games, splitting a long course 48.67 on a men’s 400 free relay leadoff leg in prelims.

While the 22-year old hasn’t yet raced in formal competition since the Olympics, when SwimSwam arrived in Springfield in November to film a Practice & Pancakes, Ostrowski was still training with the team.

Even without Ostrowski, Drury currently projects to finish 3rd in swimming points behind Queens and UIndy based on Swimulator scoring of season-best times to date.

If we factor in Cole Earl, one of the best divers In Division II, plus Ostrowski’s points, that significantly closes the 182-point gap to Queens. Cole is worth at least 30 points to the Panthers, while Ostrowski should conservatively score 50 individual points, though Drury’s relays are very highly-ranked even without him, so there’s not as much room to pick up there.

The team directly ahead of them, UIndy, is a wildcard right now after their head coach Jason Hite was fired in December.

Ostrowski, who originally committed to Florida State before winding up at Drury, says that joining a Division I program is still his goal.

“I really like Drury and (Drury assistant) coach Zach (Mertens) is a great guy. But my goal is to compete with the best in Division I,” Ostrowski said. He says that helping Drury win a national championship will be his ‘thank you gift’ to his Drury coaches for helping him get to the Olympics.

He also says that he still isn’t sure where he’s going to wind up, but will evaluate his options in the summer.

Calvin Price will save this team, mark my words…

Don’t leave the girl who brought you to the dance…

Just swimming fast at this level doesn’t mean you will swim faster at a bigger school. Ben Michaelson knew that (for those who remember). The grass is not always greener…

Especially if you are from NCAA D2, NAIA, or NJCAA, where drug testing is nonexistent.

6
-21
Reply
JP input is too short
Reply to  HJones

That’d be news to me. I know it isn’t as extensive as D1, but they have random testing throughout the season and test at least one person per heat at NCAAs as far as I remember.

We had multiple guys get tested during the season when I was in D2.

He competed at major international competitions, I’m sure he’s been tested a fair amount.

But it could. Better facilities, more resources. A potential pro training group post graduation. The sport is different than it was almost 20 years ago. Karol is also a different swimmer than Ben. Ben was not that fast at all out of high school and became elite late in college.

Who went to train with Texas when he could.

I respect your point and to a degree, I would agree with you. However, something seems to be making him faster where he is now. Sometimes the coaching is just the right fit for someone and that can be hard to find- no matter the facilities, etc. Also, how fast was this kid before Drury? He has certainly improved a lot since he got there. As long as he is still improving, why change?

He was fast but has gotten faster.

Looks to me like he dropped about a second in his 50 and about 2 seconds in his 100. He also made his olympic team after a year at Drury. I would say whatever they are doing with him there is working.

Careful, dude. Going to a different school might seem sexy but isn’t necessarily going to make you faster. If something or a style of training has made you fast, you might think about staying with it.

20
-6
Reply
There's no doubt that he's tightening up

Title should be 28.6 with fins Karol Ostrowski…

How many years of eligibility will he have when he transfers?