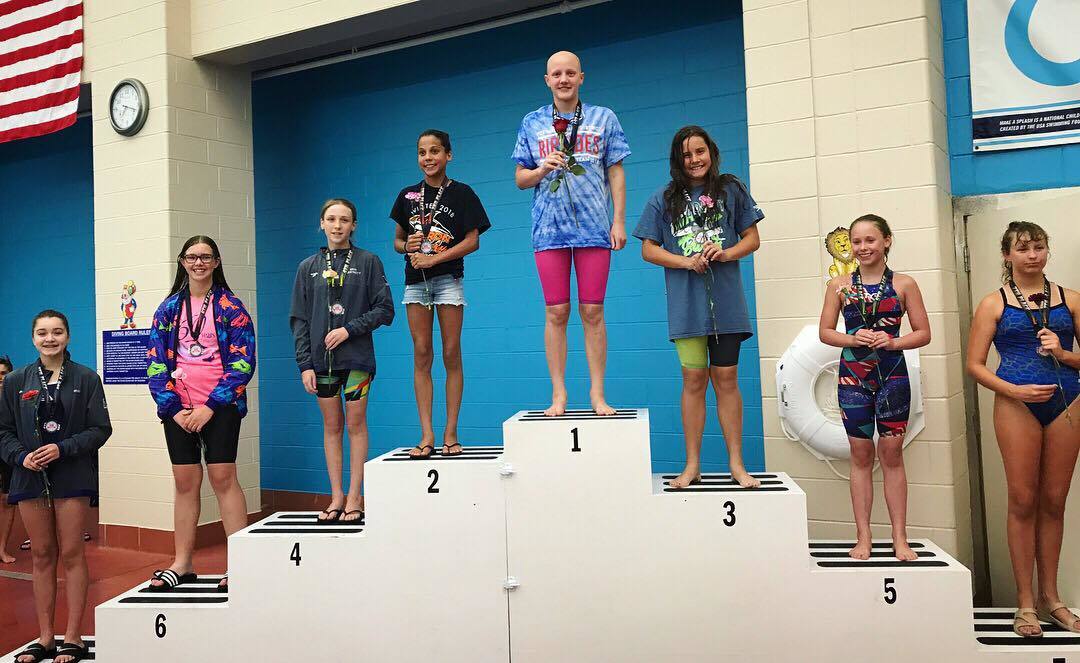 The 2019 Swim Pink A+ Invitational. hosted at the University of Iowa, featured a clash of Hawkeye swimmers training over the summer, and some of the top high schoolers in the nation. Many age group swimmers emerged victorious across a wide variety of events.

Rising University of Iowa senior Hannah Burvill won the most events of any swimmer at the meet. On the first night, she took a commanding victory in the women’s 200 free, winning the event by over two seconds with a time of 2:00.72. Running second was 13-year-old Leah Hayes from the Fox Valley Park District Riptides, who touched the wall at 2:00.72. Additionally, she took home gold in the 100 fly with a swift 1:00.72.

During the second night, Burvill stopped the clock at 4:18.16 to claim the top spot in the 400 free ahead of Iowa Flyer’s Aurora Roghair – the 16-year-old finished at 4:20.95 to shave over three seconds off her former best time.

Burvill then dominated the women’s 100 free on the final night of competition. She finished the race almost two seconds past the closest competitor, hitting the pad in a time of 55.64. Her teammate Lauren McDougall claimed the runner-up spot with a 57.50.

13-year-old Hayes also won multiple events over the course of the competition. She posted a solid win in the 200 breast with a 2:36.01 to finish ahead of recent University of Northern Iowa graduate Moriah Ross‘s 2:37.45. Then, on the final night, she dominated the 200 IM and was the only competitor to dip below the 2:20 mark in the field. She clocked a 2:17.62 for the win, beating out 14-year-old Hayley Kimmel of Linn-Mar, with her 2:21.28.

More impressively, Hayes became the youngest swimmer to earn an Olympic Trials cut for the cycle with a 4:50.99 to earn second in the 400 IM behind Springfield YMCA’s Megan Van Berkom. That time is well under the OT standard of 4:51.79, and is a new lifetime best for Hayes.

Aquajets age group phenom Isabelle Stadden also picked up two individual event wins of her own. She first reigned supreme in the 50 back with a 28.38, beating out her team and classmate Abigal Kapeller, who touched at 29.04. Next, she won an off-event for her – the 100 breast – recording a final time of 1:11.94 ahead of Saint Catherine’s Jordyn Wentzel‘s 1:12.38.

Soon-to-be Princeton University swimmer Peyton Werner of Gator Swim Club was the first multi-event winner on the men’s side of the meet. First, he won a tight battle in the men’s 200 free with University of Minnesota’s Cameron Kelley – the two clocked times of 1:53.16 and 1:53.46, respectively. Then, he won the 100 free on the final night in a time of 51.99 to out-touch Lindenwood University junior Zach Linder, who finished second with a 52.11.

16-year-old Calvin Windle of Saint Charles also ended the meet a two-time individual champion. He narrowly out-dueled Waukesha Express’s Jacob Carlson in the 50 back, as they crashed into the wall in times of 27.21 and 27.26. On the next day, he won another nail-biter in the 50 fly with Hawkeye junior Sam Dumford. Windle posted a 25.75, while Dumford settled for second with a 25.87.