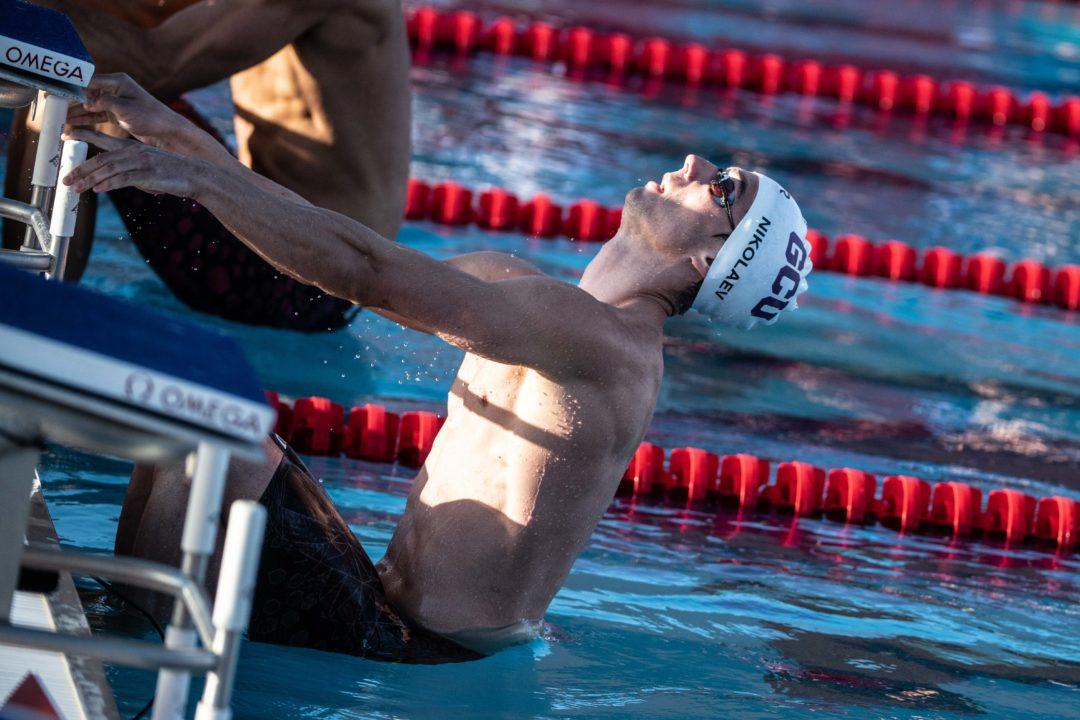 This weekend marked the start of mid-season invite season in the NCAA. Teams usually suit up and rest a little... Archive photo via Mike Lewis/Ola Vista Photography

The University of Vermont swimming & diving program handed out its year-end 2020-21 season awards in a virtual banquet last weekend.

This weekend marked the start of mid-season invite season in the NCAA. Teams usually suit up and rest a little for these meets, so there are lots of fast swims. With so much swimming news happening over the last couple days it’s easy to miss things. To make sure you’re caught up, I compiled some highlights from this weekend.

15:41.35 in November is the time of a serious national title contender, not something we say often about a swimmer from the University of Hawaii. This time would have ranked 4th last year and Ally McHugh is the only returning swimmer that was faster last year. Other than Olympic medalists Ledecky and Smith, it’s been 6 years since we’ve seen a time this fast, this early in the season. (Stephanie Peacock of North Carolina was a 15:37.06 at the 2012 Ohio St Invite).

Georgia Tech swam a 1:24.23, the top time in the country so far this year. I can sense what you’re thinking. “It’s November. It’s Georgia Tech. Wait until the big teams try. That swim won’t look so good.” Ignore those thoughts. This is a fast time. As of January 1st last season, a 1:24.23 would’ve ranked 4th. This would’ve been the 12th best time all of last season. Georgia Tech’s best ranked relay last year was 26th (800 free relay). Both their medleys were 30th. Their best 200 medley time last year was 1:25.81.

The relay was made up of 3 sophomores and a senior, so all of this improvement is in house, not due to a recruiting coup.
Tech haven’t won anything meaningful with this swim, but they’re suddenly on the radar as a serious threat to final at nationals in this event. It’ll be interesting to see where they end up at the end of the year.

Houston sophomore Katie Higgins swam a 53.83 100 fly to break the 40 year old school record of 54.11 held by Diane Johannigman. Johannigman’s record was so old it pre dated NCAA sanctioned women’s swimming by 4 years. In 1978, women’s teams competed in the AIAW. In 1978, Johnannigman’s 54.11 was the American record. It stood for a year until it was broken by Jill Sterkel’s 54.06.

One note on Johannigman’s record. Houston’s website lists the swim as happening on March 17th, 1978. However I can’t find any documentation of it happening then. I have found multiple sources (1,2) stating the swim happened on April 5th, 1978 at the AAU national championships where she was competing for the Cincinnati Pepsi Marlins (yes, that team name is a reference to the soda). She was a Houston student at the time, but wasn’t competing at a college meet. More on Higgin’s swim here.

Stony Brook get first meet win since program was reinstated

Stony Brook’s swimming and diving team was dissolved for 5 years while their pool was renovated. In their first year back last year, the team went winless and endured some rocky coaching. Under new coach Kerry Smith this weekend they beat LIU-Post, a division 2 team (Stony Brook is D1). The dual meet was competitive, finishing 124-109. Long Island had a chance to close the final margin to 1 entering the final 400 free relay, but Stony Brook won the event by 15 seconds to emphatically close out the win.

LSU junior Matthew Klotz became the first deaf swimmer officially under 20 seconds in the 50 free, and set the mark at 19.77, the 9th best time in LSU history. We did a full write up on this. Read about it here.

The Minnesota freshman’s 22.51 split came after the backstroker on his relay DQ’d for going past the 15 meter mark underwater. McHugh can’t seem to put down a fast breast split without a controversy. Last year, he split a controversial 22.69 at a high school sectional meet. More on his swim this weekend here.

I can’t find this time at the Mizzou Invite. Did it happen somewhere else?

It was a time trial at the Mizzou Invite

Yeah how is this not on there he was cookin.

Thanks Chris, we’ll definitely shoot to do at least one more of these after the next big invite weekend. We’ve also got a few more ways to highlight this weekend’s meets coming out soon, so stay tuned!

Thanks for this! I was overwhelmed trying to keep up with all of the swims this weekend, and I had missed the significance of many of these.