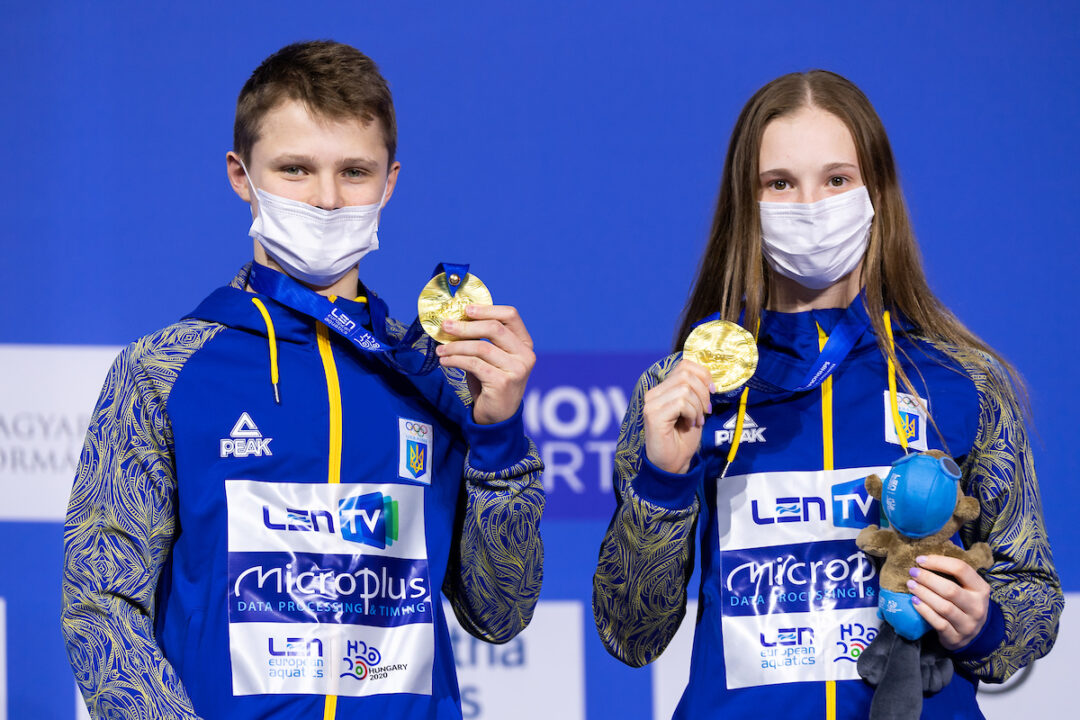 The second day of competition for diving saw two finals take place, the 10m mixed synchro, and the women’s 1m springboard. After finishing in 5th as part of the mixed team diving event on the first day of the meet, the Ukrainian pair of Kseniia Bailo and Oleksii Sereda claimed the top spot in the mixed 10m platform synchro event. On the 1m springboard, it was Italian Elena Bertocchi who took first.

The winning pair were also the youngest team in the field by a wide margin, with a combined age of just 31 years. In comparison, the German team of Hausding and Wassen had a combined age of 54, with Hausding being the oldest athlete in the field at 32. Age didn’t hold back the Ukrainian duo as, in addition to winning the event, they had the highest single dive score, earning 80-points with their fourth-round dive.

Sereda holds the European record for youngest diving gold medalist at a European Championship, having won the 10m individual event in 2019 at just 13 years of age.

The duos from both Ukraine and Great Britain both exceeded expectations, with neither having had long to prepare together before the completion this week. Bailo and Sereda were announced to be replacing the originally selected duo only a week ago, while Williams and Spendolini-Sirieix only had a total of one hour of training together prior to the meet.

While Heimberg, representing Switzerland, led after prelims in the morning by a slight margin, Bertocchi was able to overcome the deficit in finals to claim Italy’s first gold medal of the meet. This is the second time that Bertocchi has won this event at the European Championships, having taken gold in 2017.

Despite finishing second in the event, Michelle Heimberg continued making history for her country. In 2017, she became the first Swiss athlete to medal in a diving event at the European Championships. Then, in 2019 along with Jonathan Suckow, she became the first Swiss diver to win a medal in a synchro event, taking bronze on the 3m mixed synchro. Now, two years later, she has added another medal to her collection and has further cemented herself as her nation’s most accomplished diver on the European stage.

Kristina Ilinykh, who was the defending bronze medalist in the event, entered the finals in fourth but wasn’t able to overcome the deficit between her and the three medalists. Like Bertocchi, Ilinykh has already secured an Olympic bid on the 3m springboard.

Russia have a Gold and a bronze in diving so far, not a gold and a silver