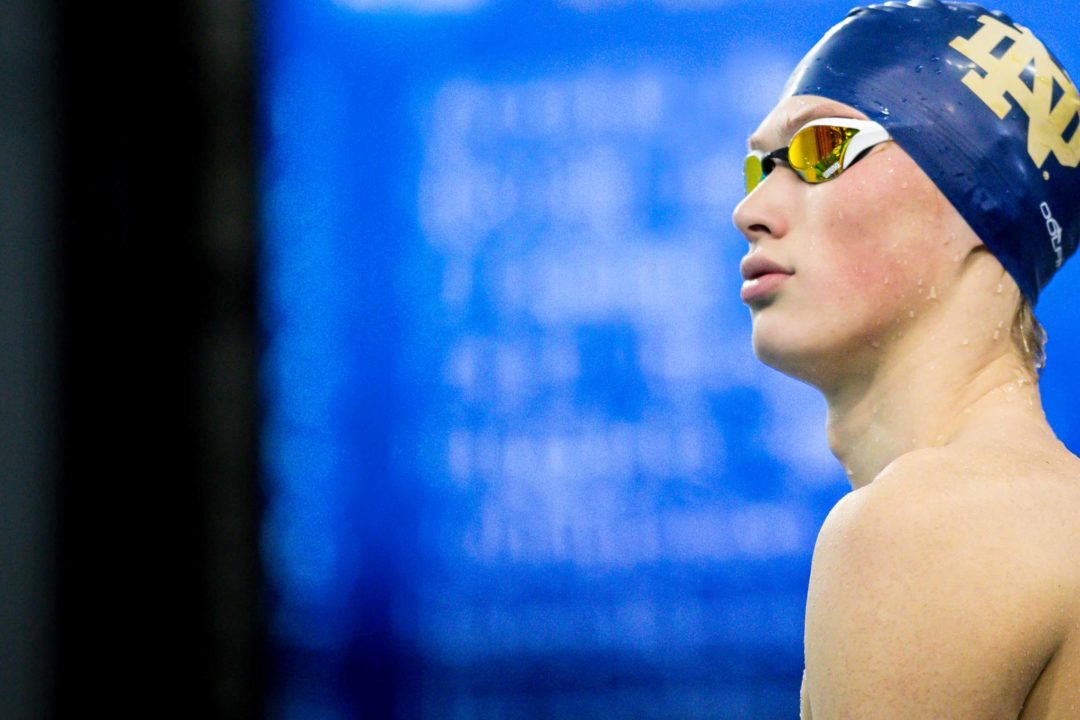 Though he was disqualified in the 1000 free early on, Yeadon came back to set a new Pool Record in the 500 free. Coleen Gillilan also set a Pool Record. Archive photo via Jack Spitser/Spitser Photography

The Notre Dame men and women took victories at home over Northwestern on Friday in dominant fashion. Multiple Pool Records went down during the meet.

Zach Yeadon took down the 500 free Pool Record. Yeadon set the pace early on, racing to a 4:19.30 to break the mark. He won the race by over 4 seconds. In his other individual event, the 1000 free, Yeadon was disqualified for a false start. Although he was disqualified, his time would have been an 8:55.43, which would have put him 10 seconds ahead of the field.

NOTRE DAME, Ind. — The No. 17/RV University of Notre Dame Swim & Dive team topped the NR/No. 25 Wildcats of Northwestern Friday night in the first home meet of 2020. The night was punctuated by two pool records set by Irish swimmers Coleen Gillilan (women’s 200 Fly) and Zach Yeadon (men’s 500 Free), along with strong finishes in the top three across the board.

“We had a lot of energy tonight,” Notre Dame head coach Mike Litzinger noted after the meet. “It really felt more like our team. We’re starting to develop that championship identity, and every swim is starting to count more and more.”

With swimmers that, on paper, were evenly matched with the Wildcats, the Notre Dame performers pulled away to strong leads early, and hung on.

“We came out on top this time, but we know that Northwestern is a great team,” Litzinger added.

The night started with a win for the Irish in the men’s 400 Medley Relay, with the team of Jack Montesi, Josh Bottelberghe, Zach Smith and Aaron Schultz posting a 3:13.88. From there, the individual wins started rolling in, beginning with Luciana Thomas in the women’s 1000 Free (9:57.90). Jack Hoagland followed suit, winning the men’s 1000 Free with a 9:05.74.

Gillilan struck again, this time posting a pool record for Rolfs Aquatic Center in the women’s 200 Fly with a 1:55.94, her 21st B-cut performance of the season. Thomas followed behind with a B-cut time of 1:59.00.

The Irish claimed both 400 Free Relays, with the women’s team of Dolan, Gillilan, Quast and Wittmer posting a 3:21.84, and the men’s group of Yeadon, Cason Wilburn, Schultz and McKeen touching the wall in 2:56.90.

According to Litzinger, the massive success for the Irish was the result of multiple aspects of Notre Dame’s schedule and training program. Friday marked Notre Dame’s first home meet since Oct. 4.

“First of all, it’s good to be home,” he added. “We race really well at home. But, the second piece is, I think it really shows the production that we got from training camp.”

Even with multiple pool records broken and NCAA B-Cut times posted, Litzinger explained that as the squad nears championship season, winning swims serve best when contributed to the overall team.

“There’s always going to be individual success, and we’re certainly proud of those athletes,” he noted. “But, at the end of the day, this was a true team effort.

“We’re starting to truly form that identity that we talked a lot about in the fall.”

Next week, Notre Dame will remain at home to host the Shamrock Invitational Jan. 24-25, and will return to Rolfs Aquatic Center again the next weekend to host Ball State and Michigan State on Feb. 1. Follow along with @NDSwimDive on Twitter for updates.

The Wildcats started the meet with the women’s relay team of junior Calypso Sheridan, first-year Hannah Brunzell, sophomore Miriam Guevara and senior Malorie Han out touching their competition by almost two second to bring home the win in the 400 medley relay.

Sophomore Andrew Zhang led the 2-3-4-8 finish in the men’s 50 free with juniors Ezra Mizgala, Peter Lewczyk and Keegan Bundy to earn 9.5 points for the Wildcats.

First-year Federico Burdisso out-touched his competition by over two seconds in the 200 fly, to score nine NU points. Sophomore Manu Martos Bacarizo followed suit, leading the 1-2 punch in the 200 back with sophomore Ryan Gridley.

Brunzell was dominant in the 200 breast, leading teammate Sophomore Angus to secure 13 points for the ‘Cats in a 1-2 finish.

Sophomore Yohan Eskrick-Parkinson was the top finisher in the 1M dive, out-scoring second place by over 25 points.

Chicago’s Big Ten Team will be back in the pool tomorrow afternoon as they face off against Iowa on senior day starting at 12 pm at the Norris Aquatics Center.

••••••
Be the first to know what’s going on with the ‘Cats — Follow @NU_Sports on Twitter, become a fan of Northwestern Athletics on Facebook, check us out on Instagram, visit our Social Media page and download our mobile app from the Apple Store and Google Play! To get involved with the #B1GCats, become a season-ticket holder or join the Wildcat Fund!

It’s still ridiculous to me that they can let you swim 40 or 66 laps at race pace after false starting (especially in a dual meet). That’s definitely an area where swimming is behind T&F.

Seems strange that Notre Dame would beat Northwestern so easily after NU’s dominance over better ranked teams this season….Also that ND was breaking so many pool records in a dual meet….Did the ND team rest for this meet?

No rest and unsuited. Great swims all around including the DQ.

There is no way they didn’t rest if compare their times from their previous dual meets. They were swimming on average 3 seconds faster per 200.