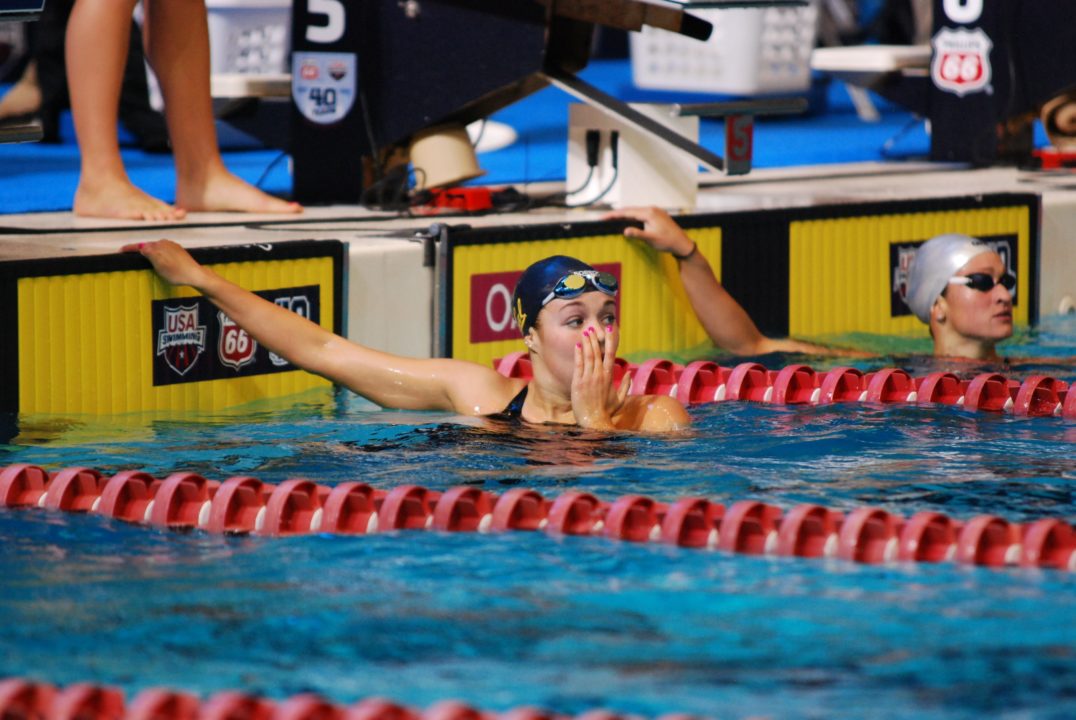 Rachel Bootsma and Liz Pelton will represent Team USA in the final of the women's 100 backstroke today. Archive photo via Tim Binning/TheSwimPictures.com

Additionally, there will also be the semifinals of the women’s 200 breaststroke, men’s 100 freestyle, and the women’s 100 butterfly.

Leah Smith is comfortably sitting in the middle of the pool for the women’s 400 freestyle after breaking Federica Pellegrini’s meet record during prelims with the fourth fastest time in the world this year, 4:04.66. The women have a bigger day than the men with five individual events and the long relay. The men will only have four races this evening; three finals and one semifinal.

Leah Smith separated herself from the field, taking an early lead 100 meters into the race. She and her teammate, Lindsay Vrooman began to pull away, Smith relying on her high stroke rate and Vrooman on her kick. They carried their lead all the way through the finish, sweeping the podium for Team USA. Smith picked up the Gold medal with her time of 4:05.29, just off of her record time from this morning, and Vrooman earned the silver medal with a 4:07.28, dropping more than four and a half seconds from her morning swim. Vrooman posted the 19th fastest time in the world this year.

The bronze medal went to Martina De Memme of Italy with her time of 4:08.95. They were the only three swimmers under the 4:10 barrier this morning.

Kiah Melverton of Australia just missed the podium with her time of 4:12.92. She led a strong charge for fourth, out-touching Justyna Burska (POL) and Asami Chida (JPN) at the wall. Burska and Chida both finished with 4:13’s.

Andrea Cottrell powered through the first semifinal heat of the women’s 200 breaststroke, winning the heat with her time of 2:27.27. That time didn’t stand for long, however. The Japanese duo of Keiko Fukudome and Reona Aoki finished first and second during the second heat of the women’s 200 breaststroke at 2:25.80 and 2:27.04, respectively. Cottrell will be the third fastest qualifier heading into finals tomorrow.

Olivia Catherine White of Great Britiain is in between Cottrell and Molly Hannis (USA) with her time of 2:27.45. Hannis finished fourth in her heat and fifth overall with a 2:27.72.

Martina Moravcikova (CZE), Francesca Fangio (ITA), and Suyeon Back (KOR) will also be joining them in finals tomorrow.

Madisyn Cox of Team USA led for the first 175 meters of the women’s 200 IM, but she didn’t have enough to hold off a charging Zhang Sishi of China. Zhang out split the field on the final 50 by over a second, finishing with a 30.99 freestyle leg for a final time of 2:12.31. Cox had a second lead after the breaststroke, but didn’t have enough down the final stretch to hold off Zhang. Cox finished second with a 2:12.77, earning the silver medal.

Ellen Fullerton of Australia earned the final spot on the podium, finishing third with her time of 2:13.48. Her teammate, Aisling Scott, was just off the podium in fourth with a 2:13.67.

Seth Stubblefield was off to an early lead, winning the first semifinal heat of the men’s 100 freestyle. He set the tone for his teammate, Jack Conger, who followed his performance by winning the second semifinal heat. Stubblefield’s time of 49.52 was slightly off the second heat, however, and will be going into finals as the fourth fastest qualifier.

Conger posted the fastest time of the morning, winning the second heat with a 49.04. There was a tie behind Conger for place in the heat between Henrique De Souza Martins (BRA) and Marco Belootti (ITA) at 49.37.

The final tomorrow night should be fast. The top seven qualifiers all finished under 50 seconds during the semifinal, and the last qualifier was only over 50 by .02 seconds.

Following Leah Smith’s lead, Josh Prenot came up big, winning the men’s 200 breaststroke with the sixth fastest time in the world this year at 2:08.90. His post-race celebration, however, was just as good as his race, so make sure you watch that later if you weren’t able to watch live. Prenot’s time was close to a half second faster than his personal best, leaving him tied with Ross Murdoch’s 6th ranked time in the world this year from the British Championships in April.

Kohinata Kabuki of Japan ran down Prenot and Craig Benson (GBR) down the final 50 meters of the race, splitting 32.82. He ran out of room and was unable to catch Prenot, but he did get his hand on the wall ahead of Benson for the silver medal. Kohinata finished second with a time of 2:09.08 to Benson’s 2:09.10.

Kirill Prigoda of Russia was just outside of medal position, finishing fourth with a 2:09.97. Calum Tait (GBR) finished fifth with a 2:10.57 and Italian Luca Pizzini finished sixth in 2:11.17.

Italy’s Elena Di Liddo claimed the top seed going into the final of the women’s 100 butterfly after winning her semifinal heat with a 58.21. She had the fastest time of the session by close to .3 seconds. The Chinese flyers, Zhou Yilin and Lu Ying, qualified second and third at 58.49 and 58.54, respectively.

Katarina Listopadova (SVK) had the fourth fastest time of the morning at 58.65. Felicia Lee (USA) was the fifth and final swimmer to break 59 seconds during the semifinal heats of the women’s 100 butterfly.

Svetlana Chimrova (RUS), Rino Hosoda (JPN), and Sam Corea (CAN) will also be joining them tomorrow in the final. 59.26 was the time needed to advance to the next round.

Italy’s Stefano Pizzamiglio picked up the silver medal after finishing second with a time of 25.43. He touched out the third place finisher, Russia’s Nikita Ul’Yanov, by a few hundredths of a second. Ul’Yanov won the bronze medal with his time of 25.49.

South Korea’s Park Seonkwan just missed the podium, finishing fourth with a 25.56. The rest of the final was very tight. Henrique De Souza Martins (BRA), Matteo Milli (ITA), Gene Siman Sudartawa (INA), and Shin Heewoong (KOR) were all between 25.57 and 25.88.

Kylie Masse won Canada’s first swimming gold medal of the games as the only swimmer to break 1 minute in the women’s 100 backstroke. Rachel Bootsma was right with her through the turn, and started gaining on her around the 75m mark, but couldn’t hang on over the last 15 meters. Masse went on to win with a 59.97. That time will stand as the ninth fastest time in the world this year.

As, Bootsma fell off over the last 15 meters, her teammate, Liz Pelton was able to gain some ground on her as well and moved into second. Pelton won the silver medal with her time of 1:00.65, while Bootsma picked up the Bronze medal at 1:00.78.

Simona Baumrtova (CZE) and Carlotta Zofkova (ITA) were the only other swimmers under 1:01 in the women’s backstroke final in fourth and fifth place.

Yekaterina Rudenko (KAZ) finished in sixth place with her time of 1:01.61. Polina Lapshina (RUS) and Holly Barratt (AUS) finished in seventh and eighth with 1:02’s.

Russia’s Evgney Koptelov absolutely destroyed the men’s 200 butterfly, posting the second fastest time in the world this year, 1:54.79. That time bumps him ahead of Chad le Clos and puts him just behind Daiya Seto in the world rankings. Previously, Koptelov was ranked eighth in the world with his time of 1:55.58.

The Silver medal went to Yajima Yuya of Japan with a time of 1:55.73. His teammate, Umemoto Masayuki, finished third with a 1:56.12 for the bronze medal.

Just outside of medal position was Italy’s Francesco Pavone with a 1:56.18. Also in the 1:56 range was Jordan Coelho of France.

China and Japan were in a tight race for the silver medal, but China ended up getting their hand on the wall first to secure the silver medal. They finished with a 8:01.09 to Japan’s 8:01.18.

Australia was just off of the podium with their time of 8:04.92, finishing nearly 12 seconds behind the Americans.

Is there a race video of Reed Malone’s 200 free?

Also his 400m freestyle. Can’t find it anywhere on youtube

I’ve noticed that Seliskar has a habit of quickly pulling on his cap and goggles at the last possible moment before stepping up. Clearly this is a bad idea for the exact reason demonstrated. Lesson learned: check your gear carefully and put on the cap and googles in the ready room.

Chad is going to have a HARD time defending his title at worlds.

The presented 200m butterfly rankings is an outdated 🙁 . Koptelov swam the same time as Kenderesi, and Cseh about a week ago the same as Le Clos….

Prenot was the star of this session. This event is going to be very competive ar the trials and cordes will have to swim very well not to be left out. I was very disappointed with Seliskar. He was much better in January untapered so I was expecting at least a 155 low.

Brilliant result for Prenot – I really thought Balandin would take the 200. What happened? Congratulations have to go to Prenot though – That showed a lot of character & class.

Happy to see Craig Benson finally moving forward after stagnating for many years. Looking at the UK rankings, if Jamieson can get back to fitness for the US Open we could have six men under 2.10 this year with a further two very close in the 2.10s… I already can’t wait for OLY trials!

Balandin was bad in semifinals and has never been in the race in final. Weird after his sub minute 100 breast.