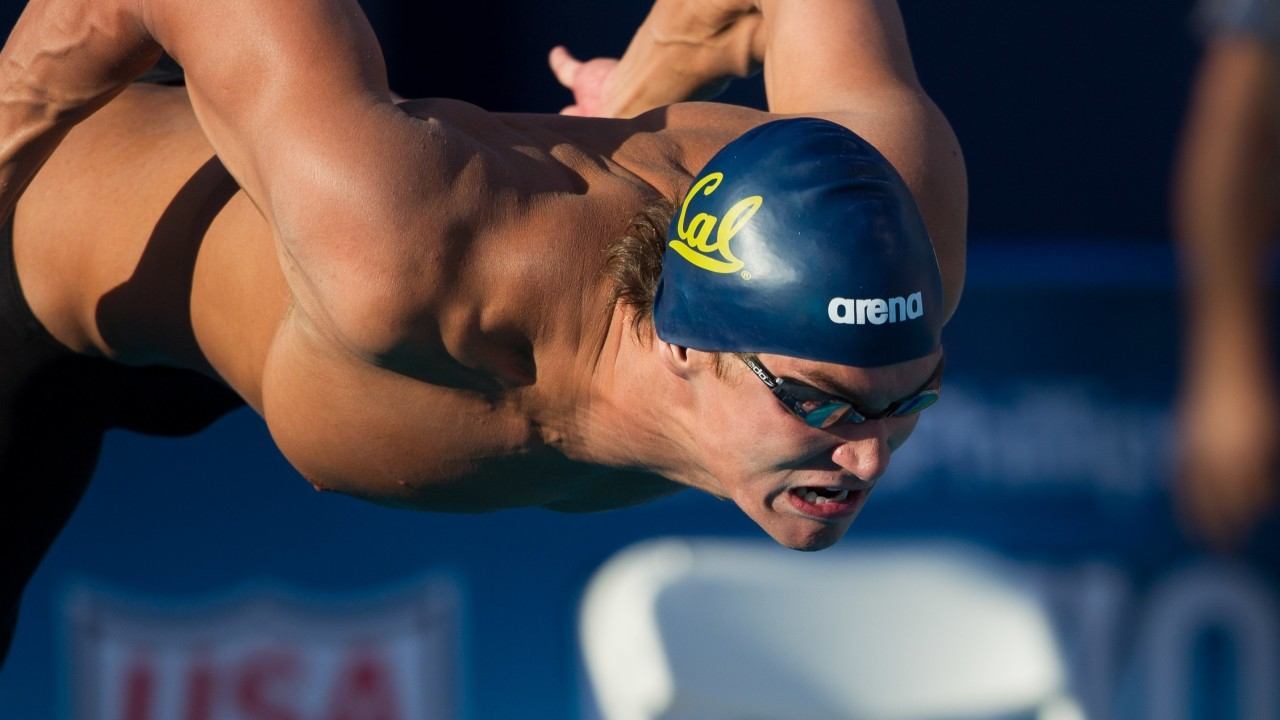 This weekend's LA Invite will feature a huge roster of national and international stars, including Olympic gold medalists Nathan Adrian and Matt Grevers among many others. Archive photo via Tim Binning/TheSwimPictures.com

This weekend’s LA Invite will feature a huge roster of national and international stars, including Olympic gold medalists Nathan Adrian and Matt Grevers among many others.

It’s no surprise, then, that most of the big names from the Trojan Swim Club will be competing, including many of the big professional group’s international stars. Russians Yulia Efimova and Vlad Morozov are two of the biggest names.

You can find the full psych sheets here, but we’ve pulled out 5 of the many storylines to follow below:

We reported yesterday on USA Swimming’s selection procedures for next year’s National Team, and how limited event entries at Worlds could force some athletes to taper for a different meet to get top times in their best events. Sure enough, two of the four swimmers we pointed out as potentially needing a second taper meet will be in attendance at the LA Invite. They are national champion breaststroker Brendan McHugh and NCAA champion sprinter Margo Geer. Watch for both to potentially drop some big times in LA in hopes of ranking within the top 6 American swimmers by season’s end, rankings that would earn them National Team funding for next year.

2. Adrian vs Morozov vs Ervin in men’s sprints

The men’s 50 and 100 freestyles will be among the weekend’s best events, in large part due to the elite talent training at California’s sprint hubs of USC and Cal – Berkeley. Nathan Adrian is the defending Olympic gold medalist in the 100 free. He’ll clash with his teammate Anthony Ervin, the 2000 Olympic gold medalist in the 50 free who came out of retirement to make the 2012 U.S. Olympic team. But both men will have a tough young speedster to contend with in Russia’s Vlad Morozov, who trains at USC. Morozov is a multi-time world and European champ and currently holds the world’s #2 time in the 50 this season.

3. Simone Manuel gears up for Worlds

Stanford’s Simone Manuel is the hot new up-and-comer in the women’s sprints for the United States, coming off a college season in which she shattered the short course American record in the 100 free. She’ll have a big test this summer trying to help the American free relays keep up with the powerhouse Australians, and the LA Invite will be one of her last tune-ups before Kazan. Manuel will swim only one event this weekend, the 100 free, so keep an eye out for a big swim from a fresh Manuel.

Cal backstroker Ryan Murphy was another swimmer we mentioned in our coverage of National Team qualifying, as he’ll only swim the 200 back in Kazan and not the 100-meter distance. This weekend might be one of Murphy’s last chances to swim a more full event lineup, and he’ll take on both backstrokes and the 200 free. That 100 back sets up a marquee matchup with defending Olympic gold medalist Matt Grevers, clearly a great test for Murphy to see where he’s at in the event before focusing only on the 200 at Worlds.

Stanford’s Maya DiRado will also take a relatively light event load in LA, swimming only the 400 IM. But she’s been heating up lately, putting up some impressive swims at the Speedo Grand Challenge and following that up with a second-place finish in the 200 back at the Pro Swim Series Santa Clara. Her World Champs teammate Elizabeth Beisel has been very quiet the past few months, and while it’s likely Beisel’s fatigue will wear off by Worlds, DiRado’s role on the national team is becoming bigger and bigger. She’s the only American swimming both IMs in Kazan, and her 400 IM this weekend will be a great momentum-builder for those swims.

The start lists are loaded, and there’s no way we can mention all the big names. But here are just a few more names to keep track of when the meet kicks off Thursday night:

These stories of national team and double taper are too complicated for me. And I smell some unfairness regarding some swimmers. Lia Neal for example. She has no individual swim at WUGs and at worlds and in your article from yesterday you say that the lead-off legs and time trials don’t count. What happens to her? For McHugh, Chenault or Geer, it’s nonsense. In fact, you ask them to rest much now and swim very fast times now to have a chance to be in the US national team perhaps to the detriment of their performances at worlds early August. It’s a lot of pressure for these athletes who, unlike the biggest stars, are probably not living high on the… Read more »

It’s time to see Adrian pop up a 48. this week-end ; let’s see how Manuel manages her 100 free as well . . . It’s very important for the Us relay next month . Murphy battling Grevers on the 100 back is most likely to be interesting . Very good test for his 200 .
This seems to be the latest test for many before worlds ; should be a fast meet .

Looks like Dana Vollmer’s back in the water too!