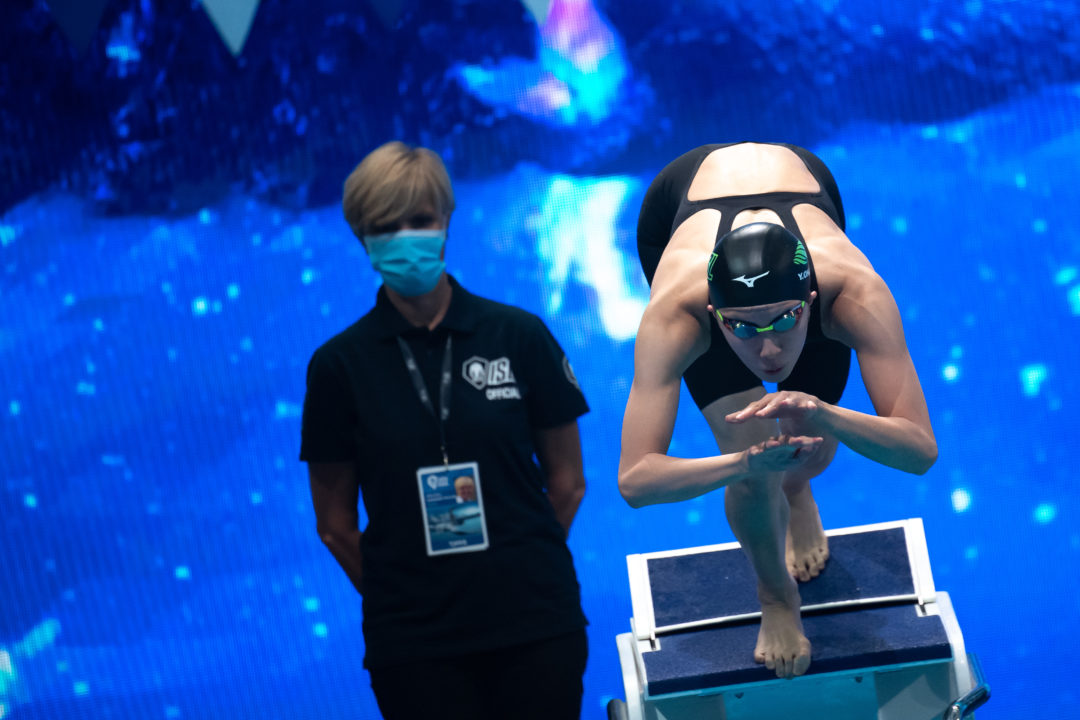 Japanese IM queen Yui Ohashi was among the swimmers making some world ranking moves on the final day of the 2021 Kosuke Kitajima Cup. Archive photo via Mike Lewis/Ola Vista Photography

The 2021 Kosuke Kitajima Cup wrapped up in Tokyo tonight, capped off by a mega performance by 19-year-old Shoma Sato. The World Junior Championships medalist produced a career-best of 2:06.78 in the 200m breaststroke to become the world’s 4th fastest man of all-time. You can read more about the Keio University student’s stunner here.

Although not quite as groundbreaking as Sato’s swim, there were plenty of other performances worth noting as this annual 3-day affair came to a close.

Yesterday’s 400m IM victors of Yui Ohashi and Kosuke Hagino both doubled up with 200m IM gold medals tonight. The Japanese IM queen and king took respective women’s and men’s titles in times of 2:09.86 and 1:58.62, with the former representing a new competition record.

Hagino currently ranks as the 4th fastest man in the world this season, courtesy of the 1:57.67 time he put up last month. Ohashi, however, makes her world rankings debut in this 2IM event for the season, now sitting only behind Australian speedster Kaylee McKeown’s 2:08.23.

Also making it into the world rankings right behind Ohashi is Miho Teramura, who touched just .22 behind the national record holder in tonight’s 200m IM race. Teramura’s performance was a near-lifetime best, approaching the 2:09.86 she registered for bronze at the 2018 Pan Pacific Championships.

Reona Aoki represented another world rankings-shaker-upper, taking on the women’s 200m breaststroke. The two-time 2018 Asian Games breaststroke medalist stopped the clock tonight in a time of 2:24.83, with the outing checking in as a season-best.

The 25-year-old now ranks as the 7th fastest performer worldwide so far this season.

The usual domestic dual between Shinri Shioura and Katsumi Nakamura came to fruition once again in the men’s 50m free, with the former touching just .01 ahead of the latter with final times of 22.25 and 22.26, respectively.