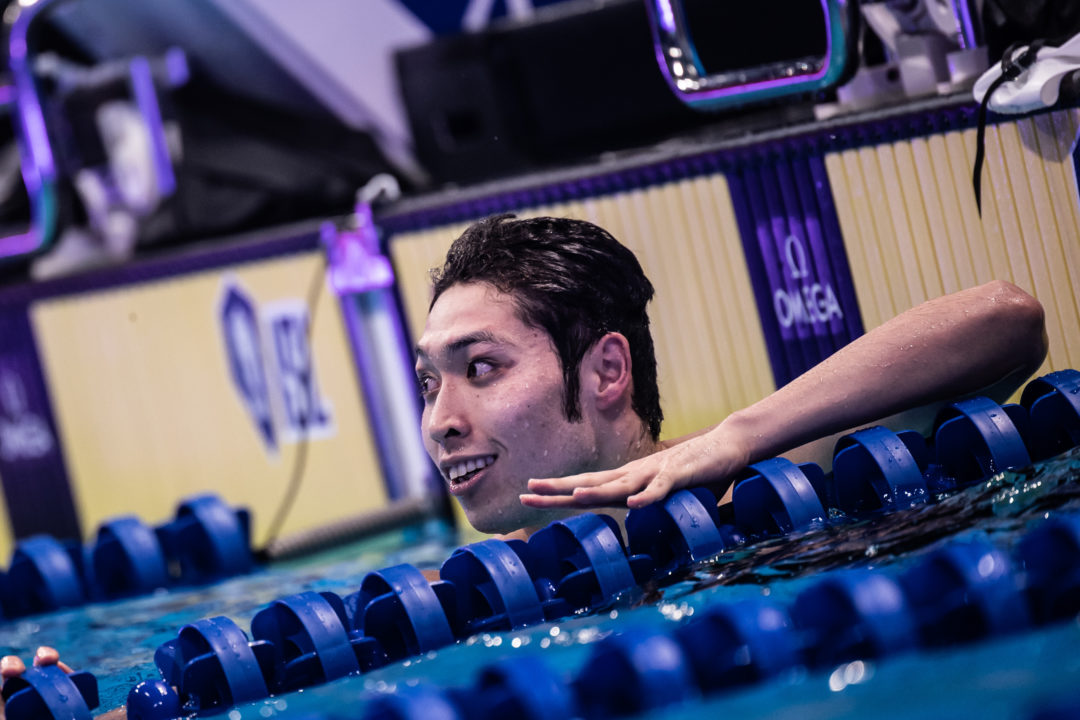 Kosuke Hagino of Japan is getting used to finishing at the wall first in the men's 400 IM, doing so again at the 2021 Kosuke Kitajima Cup. Archive photo via Mike Lewis/Ola Vista Photography

Day 2 of the 2021 Kosuke Kitajima Cup brought the heat, as national record-holders Yui Ohashi, Kosuke Hagino and Katsuo Matsumoto were all in the water.

Contesting the women’s 400m IM to kick off the action at the Tokyo Tatsumi International Swimming Centre, 25-year-old Ohashi took the meet title in a time of 4:37.22. The next closest racer was represented by Sakiko Shimizu who touched just over a second behind in 4:38.59, while the remaining competitors were at at the wall nearly 9 seconds later.

Ohashi owns the national record in the LCM 400 IM with the 4:30.82 she posted back in 2018 and also owns the top 10 performances all-time for the nation of Japan.

Her time tonight now ranks Ohashi as the 4th fastest performer in the world this season. Runner-up Shimizu actually already ranks higher than Ohashi, as the 28-year-old Olympian clocked a time of 4:36.77 at last months Japan Swim.

For Ohashi, the 2019 World Championships medalist had been in the short course realm as of late, competing as a member of the Tokyo Frog Kings in the International Swimming League (ISL). During the season 2 debut of this new team, Ohashi remained undefeated in the 400m IM while she nailed a new national record as a formidable racer in the 200m IM.

As for the men’s 4IM race this evening, mainstay Kosuke Hagino demonstrated his prowess once again, topping the field in a comfortable 4:13.91. That time sits just outside of his season-best mark of 4:13.32 logged at the aforementioned Japan Swim.

A competition record went down in the women’s 400m free, courtesy of 18-year-old Miyu Namba. The 2019 World Junior Championships medalist fired off a time of 4:11.36 to take the event, although she pulled it off by only .05.

Right behind the teen was Chinatsu Sato, with the 20-year-old producing a time of 4:11.41 to also get under the previous meet record mark.

Yesterday we saw Matsumoto scorch a new Japanese national record in the men’s 200m free and tonight he doubled up with a victory in the 100m free sprint.

Splitting 23.50/25.08, Matsumoto got it done for gold in a time of 48.58, a mark just .06 outside of his own lifetime best. His result here was enough to keep national record holder Katsumi Nakamura at bay, with the London Roar racer hitting a time of 48.75 for second place tonight, shaving .05 off his season-best.

Additional events included the men’s and women’s 200m backstroke, with Ryosuke Irie winning the former in 1:57.11 while Rio Shirai snagged victory in the latter in 2:13.69.