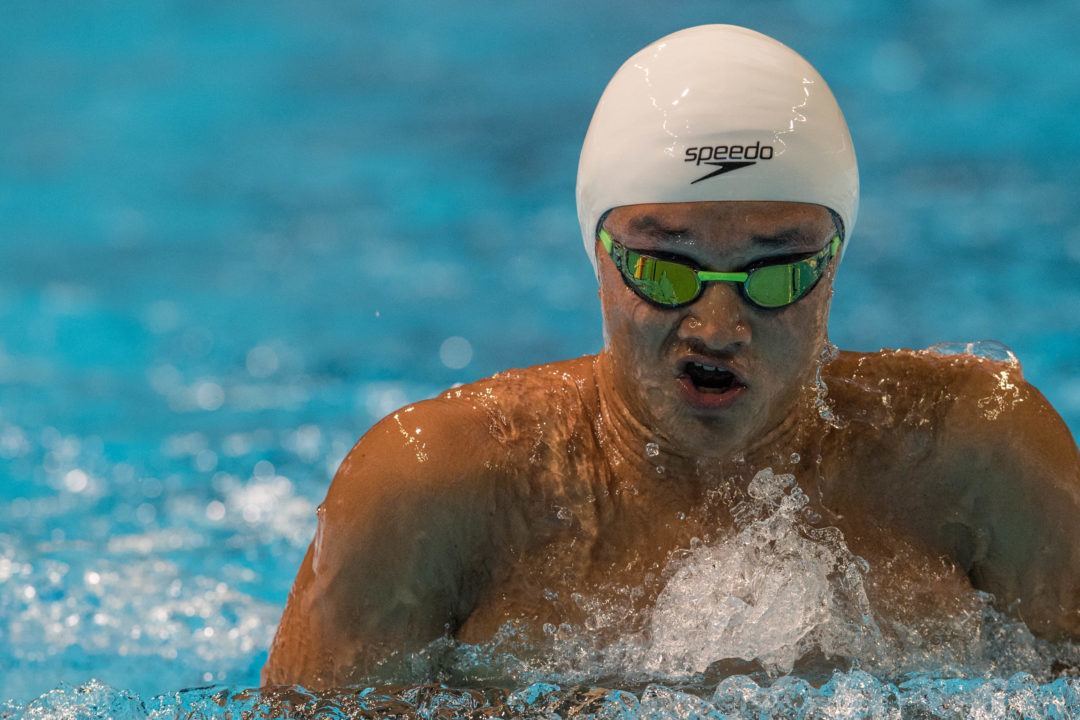 2017 junior world champion Daniel Roy is one of many young stars set to be in action this weekend at the East & West Winter Junior Championships. Archive photo via Mike Lewis/Ola Vista Photography

The psych sheets for both the East and West versions of the 2017 Speedo Winter Junior Championships have been released, with plenty of the stars from this past summer’s World Junior Championships slated to compete. Both meets will take place from December 6th to the 9th, with the East meet running in Knoxville, TN and the West meet in Iowa City, IA.

Two individual World junior medalists are also in action in Emily Weiss and Ella Nelson. Weiss, the world junior champion in the 50 breast, is seeded 2nd to Walsh in the 100 breast and also holds down the 5th seed in the 200 breast. Nelson won silver in the 200 breast in August and is seeded in the top-5 in that event along with the 200 and 400 IM.

Other notable names competing include Morgan Tankersley, who is the top seed in the 200 and 500 free, and Madison Homovich who leads the way in the 400 IM. Katherine Douglass is the #1 seed in both sprint free events.

Drew Kibler is the top billed swimmer for the boys, occupying top seeds in the 50, 100, 200 and 500 free. Kieran Smith leads the way in both IM events, and Trey Freeman, Carson Foster and Cody Bybee are also in action. Freeman, Smith and Foster won individual medals in Indianapolis, with Freeman taking bronze in the 400 free, Smith silver in the 200 IM and Foster claiming silver in the 200 back.

Some of the teams highlighting the West side include Nitro, Palo Alto Stanford, Irvine Novaquatics, Lakeside, Mission Viejo and Fort Collins.

The girls side includes World Championship team member Dakota Luther, who holds the top seed in the 100 fly and is #2 in the 200 fly and #3 in the 500 free. 200 breast world junior champion Zoe Bartel takes the top seed into both breaststroke events, while Vanessa Pearl, Gabrielle Kopenski and Lucie Nordmann are also in action.

The male 200 breast junior world champion will also be there, as Daniel Roy heads into that event as the top seed and is also 2nd in the 400 IM and 3rd in the 100 breast. Daniel Krueger is seeded 1st in both sprint frees, while Patrick Callan leads the 200 and 500.

is alexei sancov going to be there