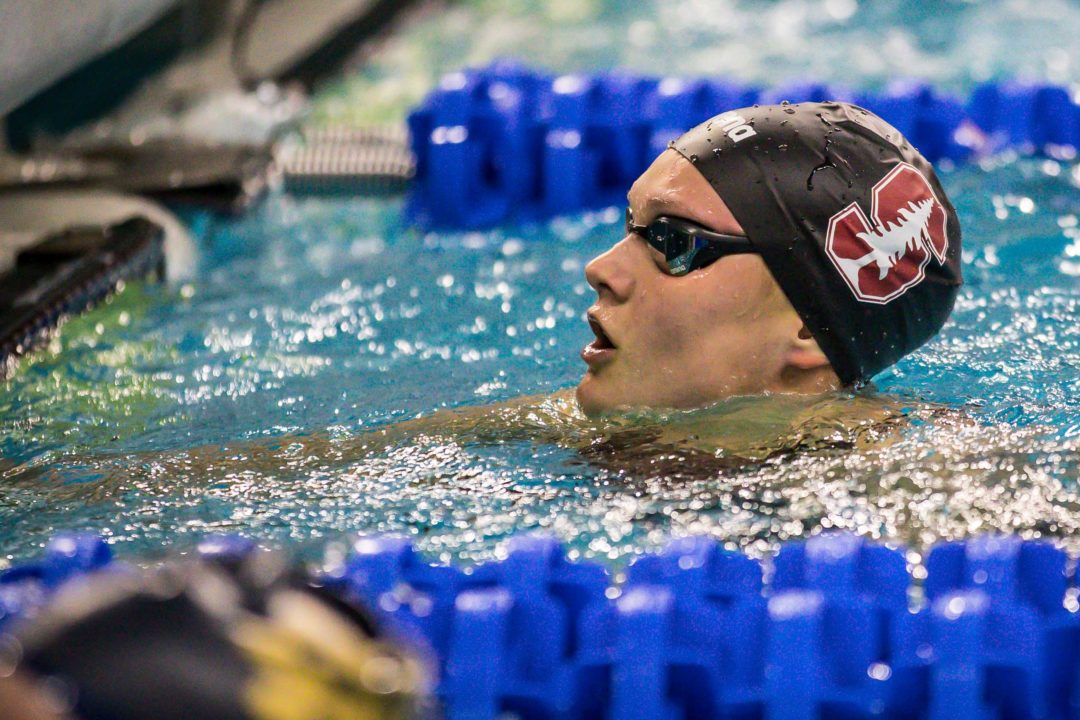 In 2017, Stanford hauled in five of our top 20 recruits. They backed that up over four years, leading the nation in scoring including the #1 overall scorer. Archive photo via Jack Spitser/Spitser Photography

Back in July of 2017, we ranked out the top 12 recruiting classes nationwide. You can look back on our ranks here:

We’ve republished each of the 12 classes below, verbatim from how they were listed in our 2017 post. Then we tracked down some stats on each class, plus a short analysis of each class along with any extra swimmers who wound up being part of the class.

*Special 2020 note: with the 2020 NCAA Championships canceled, any 2020 references below refer to psych sheet scoring, including the team finish, marked with an asterisk.

This was an outstanding class for Virginia, helping power that program’s rise to an NCAA title in their senior seasons. This crew was recruited by Virginia’s old coaching staff, with our recruit rankings coming out just a month before UVA hired Todd Desorbo away from NC State. But they swam all four seasons under Desorbo & co. Madden lived up to billing and more as the #18 recruit, scoring the second-most points of any recruit in this class and leading the class with 3 individual NCAA titles.

Four unranked recruits scored points. Seiberlich and Richter scored as sophomores, but both actually dropped off the roster in their senior seasons. Meanwhile Gmelich and Valls both scored for the first time as seniors. Valls also won an NCAA title as part of a relay.

No individual scorers out of this bunch, but that’s also not the full picture. Molnar was seeded to score in the canceled 2020 meet. She also helped Alabama win its first-ever NCAA relay title this year, splitting 47.9 on the 400 free relay and also scoring as part of the 200 free relay in 6th. Kaila Wong swam the breaststroke leg of the scoring 200 medley relay.

This group saw a massive rise in NC State’s team finish. Interestingly, the biggest individual scorer, Kate Moore, wasn’t even one of their most-touted recruits in this class. Moore and Julia Poole each scored as sophomores and seniors, with projected psych sheet points as juniors in 2020. Holub scored as a freshman but dropped off the roster after her sophomore year.

Harnish lived up to her #1 billing, scoring individually in all three meets, and she was seeded to score her highest total (38) in the canceled 2020 meet. Anderson and Dellatorre scored as seniors.

Ranked recruit Edwards didn’t scored, but Pfeifer more than made up for that by scoring 87.5 individually, the #3 overall scorer in the class. Key transfer Lohman didn’t score individually, but did fill a much-needed breaststroke vacancy on the medley relays and was an All-American with several top 8 relay finishes.

Szilagyi was the big driver of this rank, but she never wound up competing for the Gators. Diver Ashley McCool finished off her career by scoring at NCAAs and was an SEC champion on 1-meter.

This class finishes with mostly low-level individual scoring, but probably would have seen its total points at least double if the 2020 meet had happened. Popov scored as a sophomore and won an NCAA relay title that year with a strong 50 breast split on the 200 medley. Moseley was a key transfer who scored in 2018 and was a key relay piece for Tennessee throughout a big rise in the NCAA finish order as a team.

This was a small and more internationally-based class, but both Neumann and Darcel came through well. Neumann was a top 10 overall scorer in the class and the #1 international prospect in scoring. Darcel scored a dozen points as a freshmen, but scratched out of the meet as a sophomore.

This crew always looked on the cusp of a breakout that never quite materialized. Aroesty did score 9 points as a freshman, which is difficult to do. But after that, this group’s scoring dried up. They also went through a coaching change late in their careers when Dave Salo retired and Jeremy Kipp jumped from Northwestern.

What a great class this turned out to be. Belousova only swam in two NCAA meets, but scored 45 total points. Pike and Campbell each scored 20+ individually. The NCAA finishes really fluctuated over this group’s four years, but it wasn’t for lack of scoring from this class.

Schmidt was an outstanding scorer, the #6 overall individual scorer in the class. Cutshaw scored as a freshman in diving. Pyshnenko never actually scored individually, but was a really key relay piece and was seeded to score 8.5 in the canceled 2020 meet.

Our recruit rankings always inspire plenty of discussion about how much elite recruiting really matters compared to talent development. While we all remember the out-of-nowhere breakout types, this Stanford class shows just how much recruiting elite prospects still consistently outscored the diamond-in-the-rough type recruiting.

For a class with five of our top 20 recruits, this group was fairly hit-or-miss. Yet that incoming talent baseline was just so high that Stanford still had the #1 scoring group out of any of these classes. Forde was a smash hit, scoring 104 individual points and leading all individual scorers in the class. She also led the way with 3 individual NCAA titles and 2 relay wins.

Pitzer scored as a freshman and sophomore, but didn’t make the meet as a senior. Same goes for Zhao. The other two ranked recruits never scored individually.

If nothing else, this class is a reminder of why we put stock in recruiting class rankings. While not every top-20 recruit pans out, the odds of finding a smash scorer like Forde are way, way higher in top-20-type recruits than in the developmental types. Recruiting and athlete development are both factors in final NCAA scoring… but elite recruiting continues to be the most reliable factor in predicting NCAA scoring.

Only one school had four seniors score individually at the 2021 NCAA Championships and that school was Texas A&M. They seem to do a great job with whoever they have. Hats off to the Aggie coaching staff.

Good to see seniors still competing and scoring individually, as well as helping relays put valuable points on the board and/or contributing to their team in other ways (leadership, spirit, morale, etc).

I probably should have noted that if Anna Belousova had competed at the 2021 NCAAs, she would no doubt have been Texas A&M’s highest point contributor and also their 5th senior on the “Who from 2017 tallied points?” roster. I’m not sure if any other schools had key athletes missing in March, but Belousova’s absence hurt [email protected] big time.

I thought this was an interesting research piece. Every swimmer/diver and every team has their own story, but it’s fascinating to see who’s still around making a difference four years or so after completing their high school career and heading off to college.

What happened to Sarah Darcel?