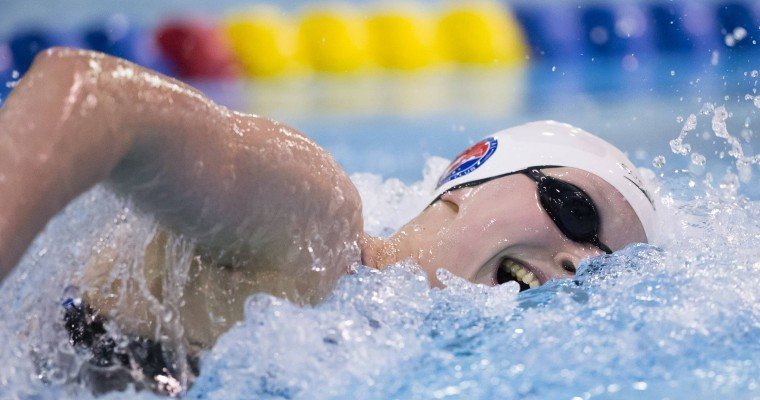 Katie Ledecky (pictured), Missy Franklin and Allison Schmitt are prepared to do battle for the national title ahead of a tightly-packed 200 free field. Current photo via Rafael Domeyko

One of the best races of U.S. Nationals on the women’s side will without a doubt be the 200 free. The drama is always high in relay selection events, with extra qualification slots for Pan Pacs and Worlds on the line, but more than that, this race brings together two of swimming’s most iconic and explosive athletes to go head-to-head.

Missy Franklin and Katie Ledecky are the two best overall swimmers in all of American women’s swimming. You could make an argument for them as the two best women in the world right now. It’s not often you get to see two swimmers of that caliber go stroke for stroke in the same event, but we’ll get that opportunity on day 2 of U.S. Nationals.

In one corner is Franklin, the defending national and world champ. Adding to her extensive international resume that includes a record 6 golds at the 2013 Worlds is Franklin’s recent prowess this short-course season. Competing for the California Golden Bears, Franklin shifted her focus from her native backstroking events to mid-distance freestyles – perhaps concerning for her backstroke races this summer, but nothing but good news in this event. Franklin smashed the short course yard American record in the 200 free, nearly becoming the first woman ever under 1:40 with a 1:40.0 split on the 800 free relay. If she has that kind of explosion in long course, look out.

On the other hand you’ve got Ledecky. A serious question: is there anyone in the world right now more red-hot than Katie Ledecky? (The only acceptable answer might be Sweden’s Sarah Sjostrom). The NCAP high school senior been on an absolute tear this season – really has been since crashing onto the scene before the 2012 Olympics. She’s been breaking world records at random, in-season meets and seems as close to unbeatable as a swimmer can get in the longer distances.

The scariest part about Ledecky in the 200? She’s still figuring out how to swim it. She bettered her own lifetime-best just a few weekends ago, going a nation-leading 1:55.79 with no competition at the Potomac Valley Senior Champs. That means Ledecky has dropped nearly two seconds from last summer, when she was 2nd in the nation, and she hasn’t even tapered yet!

But don’t let the impending showdown of two of swimming’s youngest and brightest stars distract you from the other major title contender. Did I mention that the defending Olympic gold medalist will also be in the pool? Allison Schmitt has flown a bit more under the radar after a rough summer of 2013 that left her off of the World Championships team less than a year removed from 3 gold medals in London. Schmitt actually missed the A final of this race last summer, but rolled to a consols win and has been gaining steam ever since. She holds the fastest lifetime-best of the three (1:53.61) and sits second among American swimmers for 2014, just behind Ledecky and ahead of Franklin.

This talented trio seems head and shoulders ahead of the rest of the field, and it’d be a surprise if they weren’t mainstays on the U.S. 800 free relay at Pan Pacs and Worlds. Of the three, I’m picking Ledecky because her ceiling seems almost non-existent at this point. The time keeps falling off in droves for the 17-year-old, and after knocking down World and American records like they’re junior zones cuts, there’s little Ledecky could do that would truly surprise us. Think about this: Ledecky could break World Records in all three distance freestyle races at US Nationals and no one would be completely taken aback. She could bust something insane in the 200, she could even break the World Record – an extremely-fast 1:52.98 set by a super-suited Federica Pellegrini – and though we’d be a little surprised, no one could look back and say we didn’t see the warning signs. Frankly, there’s no way to saddle expectations on Ledecky right now because she continues to blow through them like they’re cardboard. That’s the Ledecky effect.

(Side note: not only did I just bet against Missy Franklin – breaking one of my cardinal rules as a swimming writer – I also bet against Gold Medal Mel. Still, there are a lot of worse horses to hitch your cart to than Katie Ledecky.)

With the top 4 finishers making the trip to Australia for Pan Pacs, the fight for the spot behind these three should be as intense as the battle for the national title. After Ledecky dropped the 200 for Worlds last summer, Schmitt’s former Georgia teammate Shannon Vreeland filled in and did it admirably. Vreeland put up a lifetime-best 1:56.70 to make the championship final, cutting over a second off her nationals time and proving she can perform in the spotlight. Vreeland was also second to Franklin at this spring’s NCAAs. Vreeland’s college teammate Jordan Mattern is another of Georgia’s big-time freestyle group to watch out for. She took fourth last summer at nationals, and was fast at the recent Bulldog Grand Slam, breaking two minutes in-season.

Minnesota’s Kiera Janzen cracked the national team late last summer, winning the U.S. Open title with a 1:58.28. That kind of big breakout swim could be on the way again for the rising Golden Gopher senior, who combines elite endurance (she swims up to the mile) with a furious stroke tempo. Also on last summer’s national team was Stanford’s Maya DiRado, mostly known as an elite IMer. DiRado is versatile enough to go 1:58 in this race, though, and the only question mark with her is how much she’s focused on freestyle in her training compared to the other three strokes.

The top 4 will also make the 2015 World Championships team, with 5th and 6th place likely to be selected as relay swimmers as well. That means just making the final will give a swimmer great odds to represent the U.S. internationally. There’s a whole host of other swimmers in the hunt there.

One of the surprise contenders is former wunderkind Katie Hoff, reinventing herself with Hurricane Aquatics out of Miami. Hoff has stayed out of the spotlight for much of 2014, choosing to save travel costs by competing in local meets, but her swimming has often been intriguing enough to bring the spotlight to her. Hoff’s been 1:58.29 already this year, and could be a trendy “big-name” pick to fill out the final relay slot, though it’ll take a great taper from Hoff, plus she’ll have to relearn how to swim against big-time competition after her low-key season.

From the college ranks, keep an eye on Virginia’s Leah Smith. After tearing up the ACC as a freshman, Smith holds the 4th-fastest long course time of the year behind the big three. There’s Stanford’s Lia Neal, a top-tier sprinter who swims up to the 200 but is probably most dangerous in the 100. USC’s Chelsea Chenault was an A-finalist last summer, while Melanie Margalis is another product of Georgia’s 200-freestyler factory. Also watch out for Texas’s Madisyn Cox, who’s been just under two minutes already this season.

The 200 always winds up with some DiRado-type swimmers, versatile athletes who put their main focus elsewhere but might just have the talent to sneak out a relay slot. Cal’s Liz Pelton is one such swimmer, as is Florida grad Elizabeth Beisel. Indiana’s Lindsay Vrooman isn’t an IMer like the first two, but is most dangerous in the distance races, though she can put together a solid 200 as well.

Then there’s the young guns. 17-year-old Quinn Carrozza is a returning A-finalist swimming for Longhorn Aquatics. There’s the NBAC duo of Cierra Runge and Gillian Ryan, with the former headed to Cal this fall and the latter to Michigan. Both are credible threats, especially Runge, who went a lifetime-best at the Santa Clara Grand Prix and ranks 7th among Americans for the season. Becca Mann is an outstanding distance and open water swimmer now training at NBAC as well. The big question is whether she has enough speed to contend in this shorter distance. Simone Manuel has no shortage of speed, being perhaps the next big thing in American sprinting. Can she hang on long enough to crack the 200 final? SwimMAC’s Kathleen Baker is an all-around threat, though she may scratch this race in preparation for her 200 back later in the session.

From the professional crowd there’s Karlee Bispo, a former Texas Longhorn who took 7th last summer. Beyond that is international relay hero Megan Romano, who’s had a quiet regular season but generally breaks out at taper time, plus Stanford’s Andi Murez, who went a lifetime-best in this race back in June.

With an outstanding clash of swimming titans for the win, and up to 6 international spots up for grabs, this is a race you’ll want to watch closely, keeping an eye on the whole pool for what should be one of the premier women’s races of U.S. Nationals.

Should be an exciting race!! So excited 🙂

My prediction is also Ledecky. Franklin a close 2nd.

Ledecky for win. Pan pacs and euro will decide if sarah or ledecky will be the swimmer of the year. Only those 2 deserve