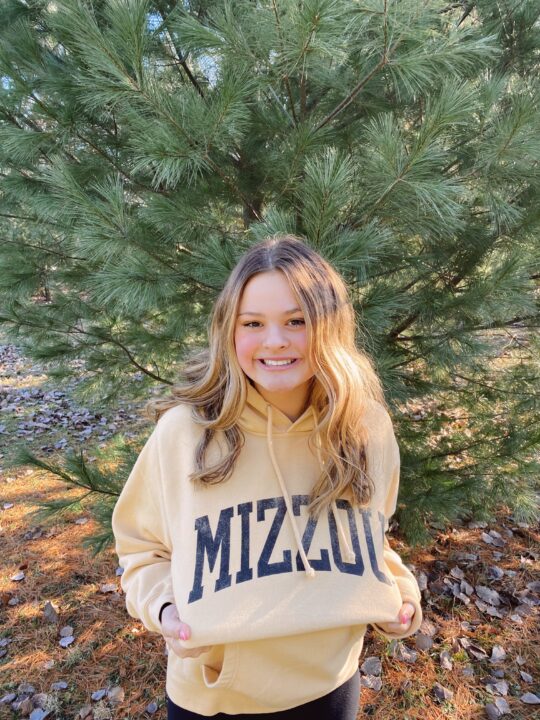 Drexler will become a member of Missouri's talented group of IM swimmers in their class of 2027 when she joins the team's roster in two years.

A four-time top-8 finisher at the WIAA State Championships, Peyton Drexler of Hartland, Wisconsin has announced that she will be continuing her swimming career at the University of Missouri beginning in the fall of 2023. Drexler is currently in her junior year at Arrowhead High School.

In November, Drexler finished in the top-8 of both the 500 free and 200 IM at the WIAA Division 1 Swimming and Diving State Championships. She was able to claim a podium spot in the 500, taking third in a time of 4:57.43. That swim was good for a new lifetime best in the event, taking over two seconds off of her previous best in the race. She missed the 200 IM podium by the narrowest of margins, with Grace Drabot of Cedarburg beating her by just .01 in the event. Drexler finished in a time of 2:03.42.

“I am so excited to announce my verbal commitment to the University of Missouri to continue my swimming and academic career. Thank you to my family, friends, and coaches, I couldn’t have done it without your help and support. Go tigers!🐯”

The Tigers finished in 7th out of 12 at the 2021 Southeastern Conference Swimming and Diving Championships last season, narrowly beating out Aranksas by just 20 points. Mizzou only had one swimmer win a medal individually, with Sarah Thompson grabbing silver in the 100 back.

Last season, the IM events were a huge weakness for the Tigers, with the team not scoring any points in the two events. The program was led in both events by Katrina Brathwaite, a current junior on the team. Brathwaite will have likely graduated prior to Drexler’s arrival on campus.

Mizzou was slightly better in the distance freestyle events last year, with freshman Jane Smith scoring in both the 500 and 1650 freestyles. In the 1650, she earned an NCAA Championships invite, going on to finish 40th at the meet. Drexler will have one year of overlap with Smith when she comes to campus in 2023.

While the class of 2027 is still a year and a half away from the beginning of their collegiate careers, Missouri has already gained commitments from four other girls. Drexler will be joined at Mizzou by Emily Roden, Francesca Smith, Kylee Sullivan, and Piper McNeil. The class so far already boasts a lot of IM talent, with both Sullivan and McNeil having already won state titles in the 200